The swap at a checkpoint near the rebel-held city of Horlivka was part of an agreement brokered this month at a summit of the leaders of Ukraine, Russia, Germany and France.

According to figures from officials of the Donetsk and Luhansk People’s republics — the two separatist governments in the rebel area — Ukraine turned over 124 people and the separatists freed 76.

Those released by Ukraine included five former members of the now-disbanded special police force Berkut who were charged in the killing of protesters in Kyiv in 2014, Ukrainian news site Hromadske quoted their lawyer, Igor Varfolomeyev, as saying. 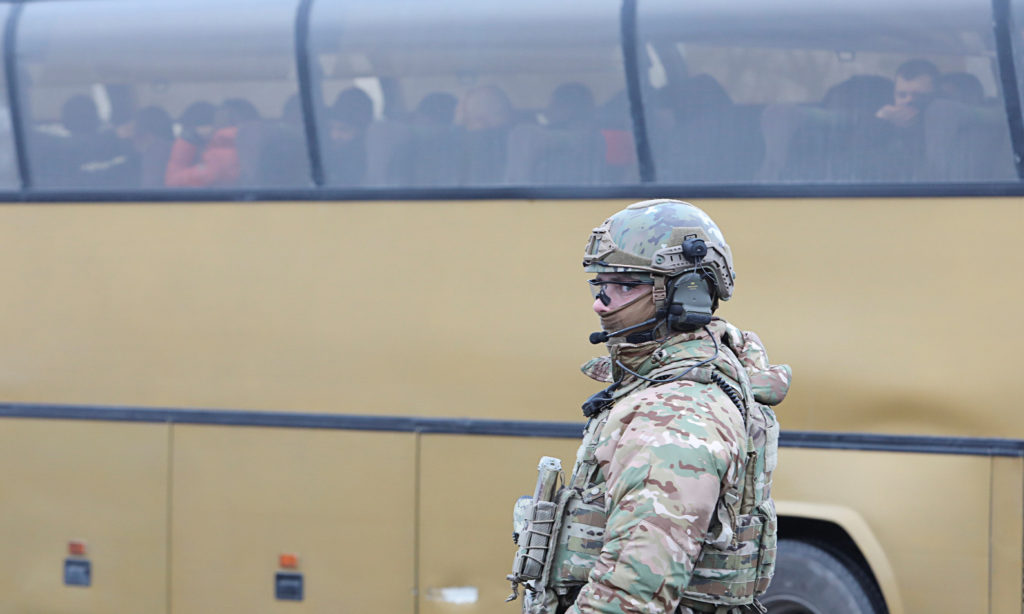 A Ukrainian serviceman stands guard near a bus for pro-Russian rebels during the exchange of prisoners of war near the Mayorsk checkpoint in the Donetsk region of Ukraine on December 29, 2019. Photo by Vyacheslav Madiyevskyy/Reuters

The Security Service of Ukraine said the 76 freed by the rebels included 12 servicemen, two of whom had been held since 2015 after being ambushed while escorting a convoy of wounded out of the battle of Debaltseve, which destroyed much of the city.

U.S.-funded Radio Free Europe/Radio Liberty said two of its contributors, Stanislav Aseyev and Oleh Halaziuk, were among the released; they were taken captive in 2017.

Other civilians released by the separatists included a pet shop owner who was detained last year on unknown charges and a woman from government-controlled territory who was seized while visiting her mother in a rebel area.

A representative of the Luhansk rebels, Olga Kovtseva, was quoted by Russian news agencies as saying those released to her side included five Russian citizens and one from Brazil.

The last major prisoner swap between separatist rebels and Ukrainian forces took place in December 2017, with 233 rebels exchanged for 73 Ukrainians. 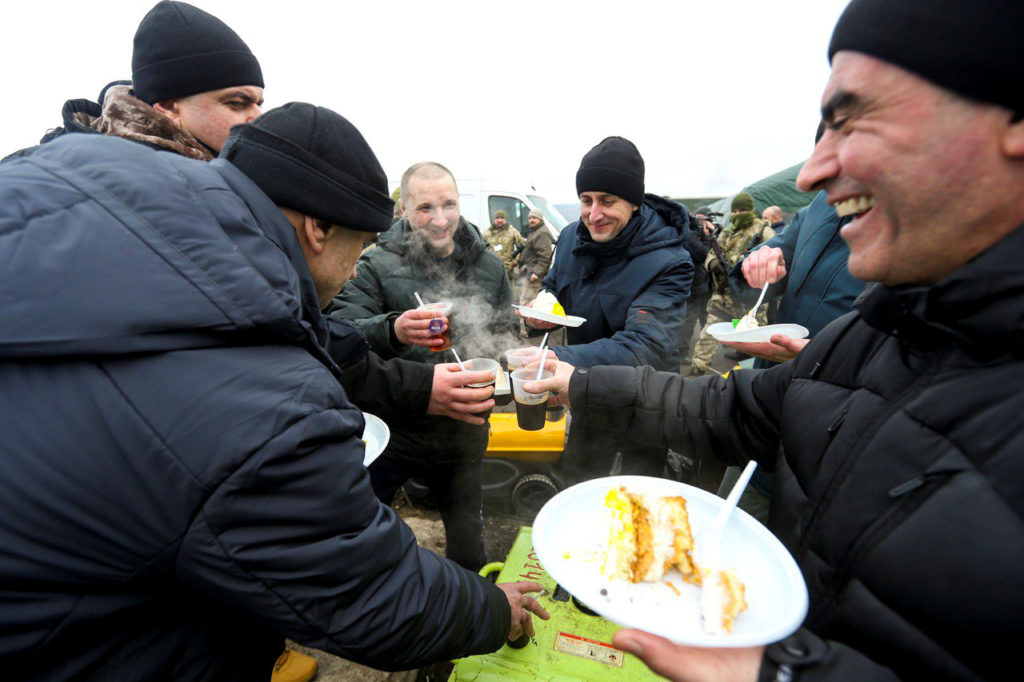 Ukrainian citizens have meals after they were exchanged during a prisoners of war the swap. Photo handout via Ukrainian Presidential Press Service

The conflict in eastern Ukraine has killed more than 14,000 people since 2014. It began about two months after Ukraine’s Russia-friendly president fled the country amid massive protests in Kyiv. Russia’s annexation of the Crimean Peninsula soon followed.

Hopes for ending the fighting have risen since the election of Ukrainian President Volodymyr Zelenskiy, who has been more amenable to negotiations with Russia on ending the war.

But prospects for peace are troubled by questions over allowing local elections that would ensure the rebel regions more autonomy and about Ukraine regaining control of its border with Russia in the rebel areas.

Merkel and French President Emmanuel Macron viewed the exchange as “a long hoped-for humanitarian gesture that should contribute to the restoration of trust between the two sides,” according to a German government statement.

Konstantin Kosachev, head of the foreign affairs committee in Russia’s upper parliament house, took note of the difficult issues still to be solved but said, “One way or another, the countdown is finally moving in the right direction.”

The leader of the Luhansk People’s Republic, Leonid Pasechnik, praised the exchange as the rebels’ “latest victory.”

Yuras Karmanau in Minsk, Belarus, and Jim Heintz in Moscow contributed to this story.

Left: Men are escorted by servicemen of the self-proclaimed republics during the exchange of prisoners of war near the Mayorsk crossing point in Donetsk region, Ukraine, on December 29, 2019. Photo by Alexander Ermochenko/Reuters