US-backed Syrian fighters advance on 2 fronts against IS

OUTSIDE BAGHOUZ, Syria — The ground assault into the last area held by the Islamic State group intensified Saturday as U.S.-backed Syrian fighters made “remarkable progress” amid heavy clashes, including the capture of a hill overlooking a tent encampment for the extremists, officials with the Kurdish-led forces said.

The capture of the last pocket still held by IS fighters in Baghouz village would mark the end of a devastating four-year global campaign to end the extremist group’s hold on territory in Syria and Iraq — their so-called “caliphate” that at the height of the group’s power in 2014 controlled nearly a third of both Iraq and Syria.

Since the last push by the Syrian Democratic Forces began Friday night, the Kurdish-led force has been advancing slowly on two fronts as the extremists used snipers and booby traps to slow the push on the last area they control, SDF spokesman Mustafa Bali said. He added that IS tried to detonate a suicide car bomb against advancing fighters but the attempt failed.

Bali tweeted that “heavy clashes” were taking place in the area on the east bank of the Euphrates River. Later in the day, he tweeted that heavy fighting continued at outskirts of Baghouz, adding that “SDF made a remarkable progress since yesterday evening (and) recaptured many positions from ISIS.”

Zana Amedi, an SDF commander, told The Associated Press that “an active ground force” is advancing into IS-held territories as the extremists resort to sniper fire and booby-traps.

Another SDF commander who goes by his nom de guerre, Aram, said the assault into the last IS sliver of land intensified later Saturday.

Two helicopters for the U.S.-led coalition were seen circling the area of fighting around noon Saturday. A loud explosion later was heard from a distance and thick black smoke billowed into the sky, apparently a coalition airstrike.

The SDF on Friday evening resumed military operations to liberate the last piece of territory held by IS in the province of Deir el-Zour after evacuating thousands of civilians and hostages who had been besieged inside. 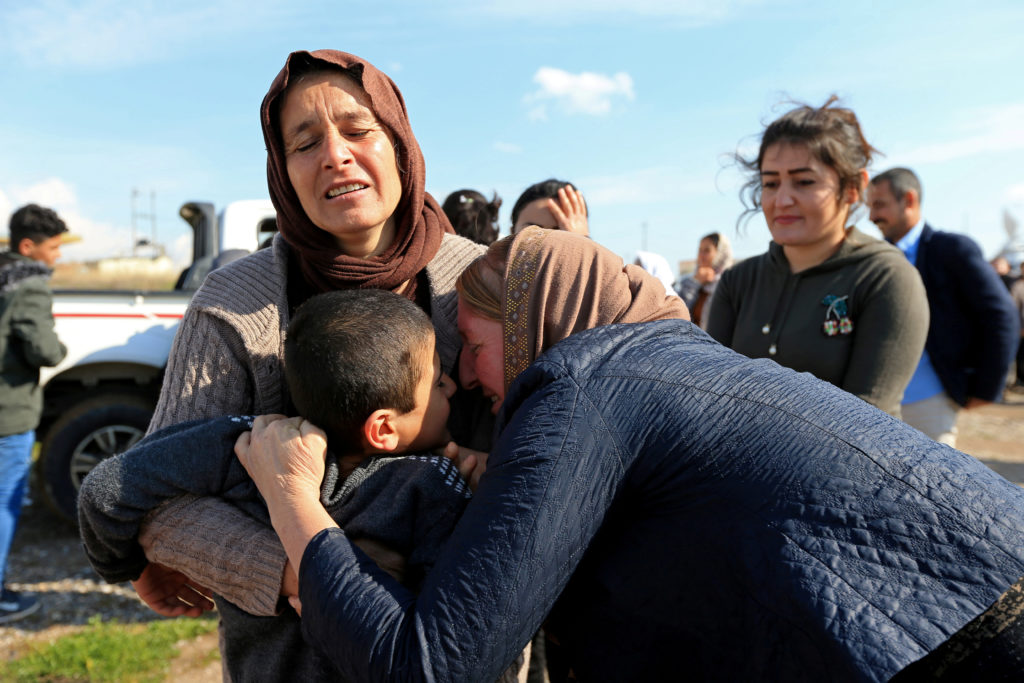 The military campaign to uproot the militants from the eastern banks of the Euphrates began in September, pushing them down toward this last corner in the village of Baghouz, near the Iraqi border. The military operation was halted on Feb. 12 as the SDF said a large number of civilians and hostages were holed up in the territory, which sits atop caves and tunnels where they had been hiding.

By Friday, more than 10,000 civilians had left the IS held area and the extremists released some SDF fighters they had taken prisoner in earlier battles. 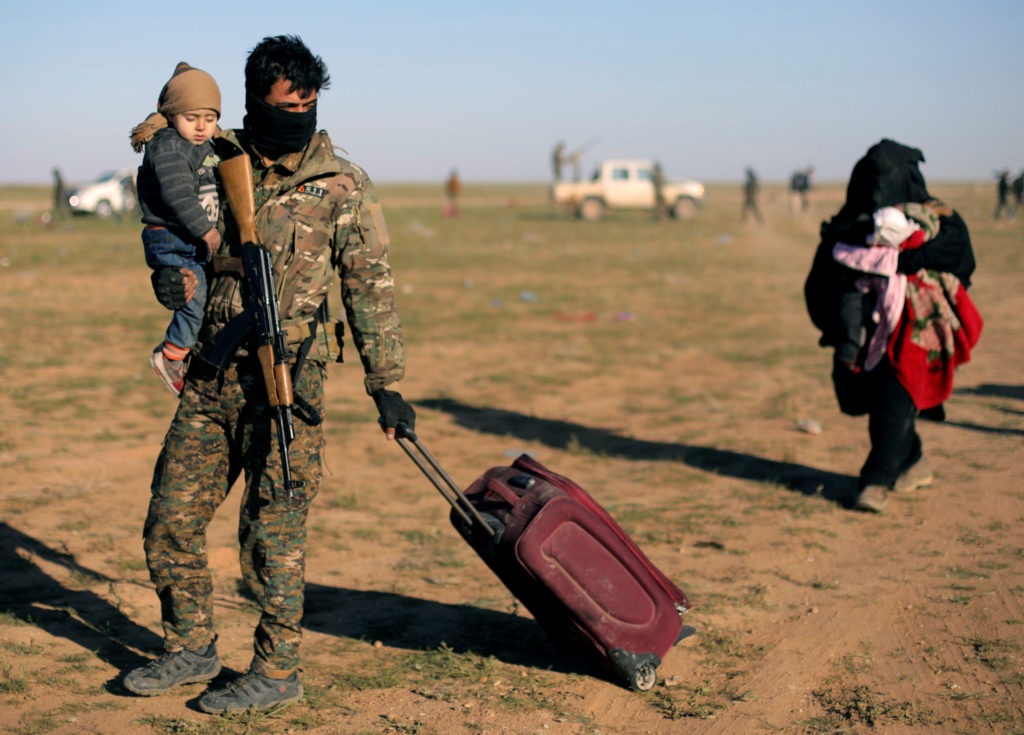 “We expect it to be over soon,” Bali said.

Afrin said the buffer area between IS and SDF had been closed after the SDF’s advance. He said there have been no suicide attacks but that some land mines went off. 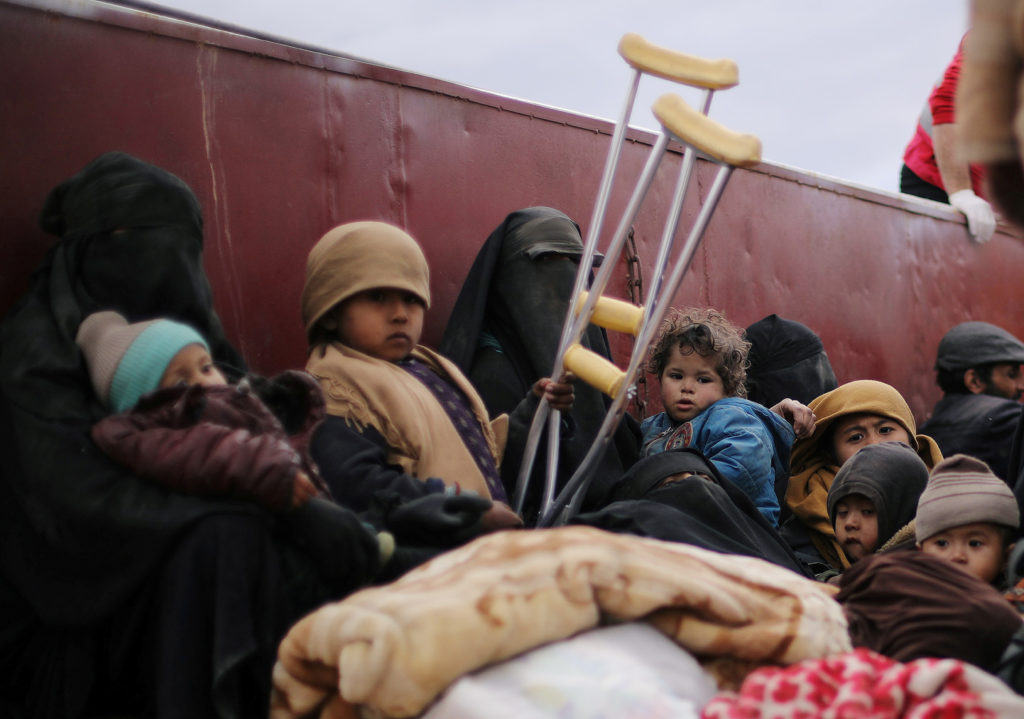 Children sit at a back of a truck near the village of Baghouz, Deir Al Zor province, Syria February 27, 2019. Photo by Rodi Said/Reuters

The Britain-based Syrian Observatory for Human Rights, a war monitor, said 10 IS gunmen were killed in fighting in the Baghouz area. It added that Syrian government forces and their allies clashed with IS gunmen who tried to cross to the west bank of the Euphrates river leaving seven IS members dead.

“At least now, we are trying to advance on the ground with rare airstrikes,” he said. “Now it’s mostly clashes. There are almost no airstrikes this morning. There were few airstrikes in the morning and nothing else after that.”