TEHRAN, Iran — The coronavirus outbreak disrupted Islamic worship in the Middle East as Saudi Arabia on Wednesday banned its citizens and other residents of the kingdom from performing the pilgrimage in Mecca, while Iran canceled Friday prayers in major cities.

The decisions in Riyadh and Tehran affected both Sunni and Shiite Muslims alike.

The Saudi move expands a ban last week on foreigners visiting Mecca and Medina, home to the holiest sites in Islam. That decision alone disrupted travel for thousands of Muslims already headed to the kingdom and potentially affects plans later this year for millions more ahead of the fasting month of Ramadan and the annual hajj pilgrimage.

Even after that announcement on Feb. 27, people already in Saudi Arabia could still travel to Mecca’s Grand Mosque, where pilgrims circle the black, cube-shaped Kaaba that Muslims around the world pray toward five times a day. The crowds were far smaller crowds than usual before Wednesday’s statement from an unidentified Interior Ministry official that was carried by the state-run Saudi Press Agency.

Millions attend the annual hajj, which this year is set for late July into early August, and many more visit the kingdom’s holy sites year round. Those other pilgrimages are referred to as the umrah, which drew 7.5 million foreigners in 2019 alone. 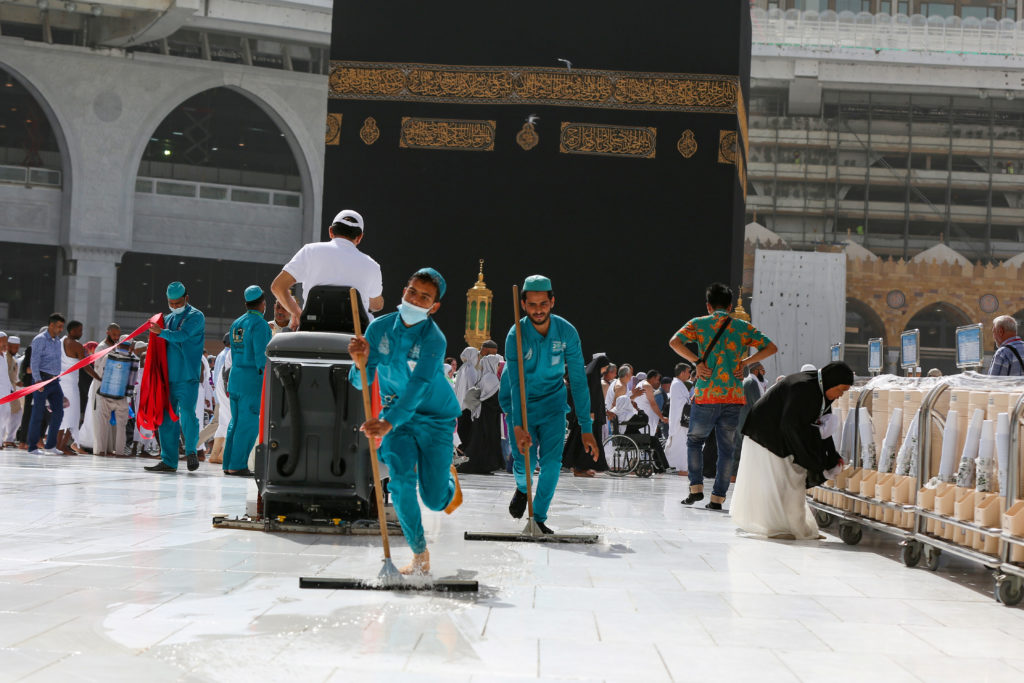 Cleaners wear protective face masks, following the outbreak of the coronavirus, as they swipe the floor at the Kaaba in the Grand mosque in the holy city of Mecca, Saudi Arabia. Photo by Ganoo Essa/Reuters

It remains unclear how the ban will be enforced. The government described the suspension as “temporary,” but gave no hint at when it will be lifted. The ban also appeared to encompass the Prophet Muhammad’s Mosque in nearby Medina.

The decision seeks to “limit the spread of the coronavirus (COVID-19) epidemic and prevent its access to the Two Holy Mosques, which are witnessing a permanent and intense flow of human crowds, which makes the issue of securing these crowds of utmost importance,” the Saudi government said.

In Iran, authorities halted Friday prayers in all provincial capitals amid the country’s growing coronavirus outbreak, which has killed at least 92 people amid 2,922 confirmed cases.

“This disease is a widespread one,” Iranian President Hassan Rouhani told his Cabinet, according to a transcript. “It encompasses almost all of our provinces and is, in a sense, a global disease that many countries in the world have become infected with, and we must work together to tackle this problem as quickly as possible.”

The announcement came a week after a similar order affected Tehran and several other major cities.

While observant Muslims can pray at home, the devout prefer to attend Friday prayers as a community. Iran’s Shiite theocracy also use the services to share ideological messages by clergymen selected by Supreme Leader Ayatollah Ali Khamenei.

There are now over 3,150 cases of the virus across the Mideast. Of those outside Iran in the region, most link back to the Islamic Republic.

Top leaders in Iran’s civilian government and Shiite theocracy have become infected with the virus. The country stands alone in how the virus has affected its government, even compared to hard-hit China, the epicenter of the outbreak. Worldwide, the virus has infected more than 90,000 people and caused over 3,100 deaths.

“The virus has no wings to fly,” Health Ministry spokesman Kianoush Jahanpour said. “We are the ones who transfer it to each other.”

Experts worry that Iran may be underreporting its cases. Authorities in Iran said they arrested a man for posting a video online of bodies wrapped in white shrouds and zipped into black body bags at a cemetery in Qom on Monday.

Experts worry that Iran may be underreporting its cases.

The video purports to show over 30 corpses waiting to be washed per Islamic tradition, with a man’s voice alleging all were “corona-infected.”

Ali Ramezani, the executive manager of Qom cemetery, later told state television that authorities were awaiting the outcome of coronavirus tests on them before they were prepared for burial. Bodies testing positive are buried by staff wearing gloves and protective gear, and the graves are lined with lime.

“If the test results are negative, then there is no need to bury them based on the protocol for the new coronavirus and the family can receive the body of their loved ones and bury it where they want,” Ramezani said.

Eshaq Jahangiri, Iran’s senior vice president, meanwhile banned all overseas trips for officials to attend international events, the semiofficial ISNA news agency reported. That did not affect Oil Minister Bijan Zangeneh, who traveled with an entourage to Vienna for an OPEC meeting.

Rouhani, in his Cabinet meeting, acknowledged the toll the outbreak was taking on the public. He called on state television to offer “happier” programs to entertain those stuck at home.

“I urge all artists, scientists, psychologists and all who can bring smiles to people’s faces, come into the social media,” he said. “Today, words that make people tired are no longer advantageous.”

In Israel, Chief Rabbi David Lau urged observant Jews to refrain from kissing the “mezuzot,” a small item encasing a prayer scroll that is attached to doorposts. Observant Jews typically touch the item and then kiss their hands when walking through a doorway.

Officials in Iraq’s semi-autonmous Kurdish region said they suspected a 70-year-old man living near the border with Iran died of the coronavirus. He would be Iraq’s first death from the virus, although authorities in Baghdad had not confirmed his infection.

The United Arab Emirates helped evacuate Sudanese students stuck in the hard-hit Chinese city of Wuhan. They’ll be held in the UAE in quarantine. And Egypt banned Qataris from entering the country following Doha starting a similar ban.

Left: Muslim pilgrims wear protective face masks, following the outbreak of the coronavirus, as cleaners wipe the floor while people pray at Kaaba in the Grand mosque in the holy city of Mecca, Saudi Arabia. Photo by Ganoo Essa/Reuters