DETROIT — As the United States led the world with confirmed coronavirus cases, cities such as Detroit, Chicago and New Orleans grew as hotspots Saturday, while the virus continued to pummel New York City and made its way into rural America.

Elsewhere, Russia said its borders would be fully closed as of Monday, while in parts of Africa, pandemic prevention measures took a violent turn, with Kenyan police firing tear gas and officers elsewhere seen on video hitting people with batons.

Worldwide infections surpassed 640,000 with nearly 30,000 deaths as new cases also stacked up quickly in Europe, according to a tally by John Hopkins University. The U.S. leads the world in reported cases with more than 112,000, but five countries exceed its roughly 1,700 deaths: Italy, Spain, China, Iran and France. Italy alone now has 10,023 deaths, the most of any country.

But Cuomo said he knew nothing of President Donald Trump’s suggestion of some kind of quarantine for New York and parts of New Jersey and Connecticut, all hit hard by the coronavirus.

The federal government generally does not have the power to impose such restrictions on states. Trump made the comments on his way to Norfolk, Virginia, to see off a U.S. Navy medical ship en route to New York City to help with the response there.

Cases also have been rising rapidly in cities such as Detroit, where poverty and poor health have been problems for years. The number of infections surged to 1,381, with 31 deaths recorded, as of noon Saturday.

“At this time, the trajectory of Detroit is unfortunately even more steep than that of New York,” said Dr. Teena Chopra, the medical director of infection prevention and hospital epidemiology at the Detroit Medical Center.

“This is off the charts,” she said. 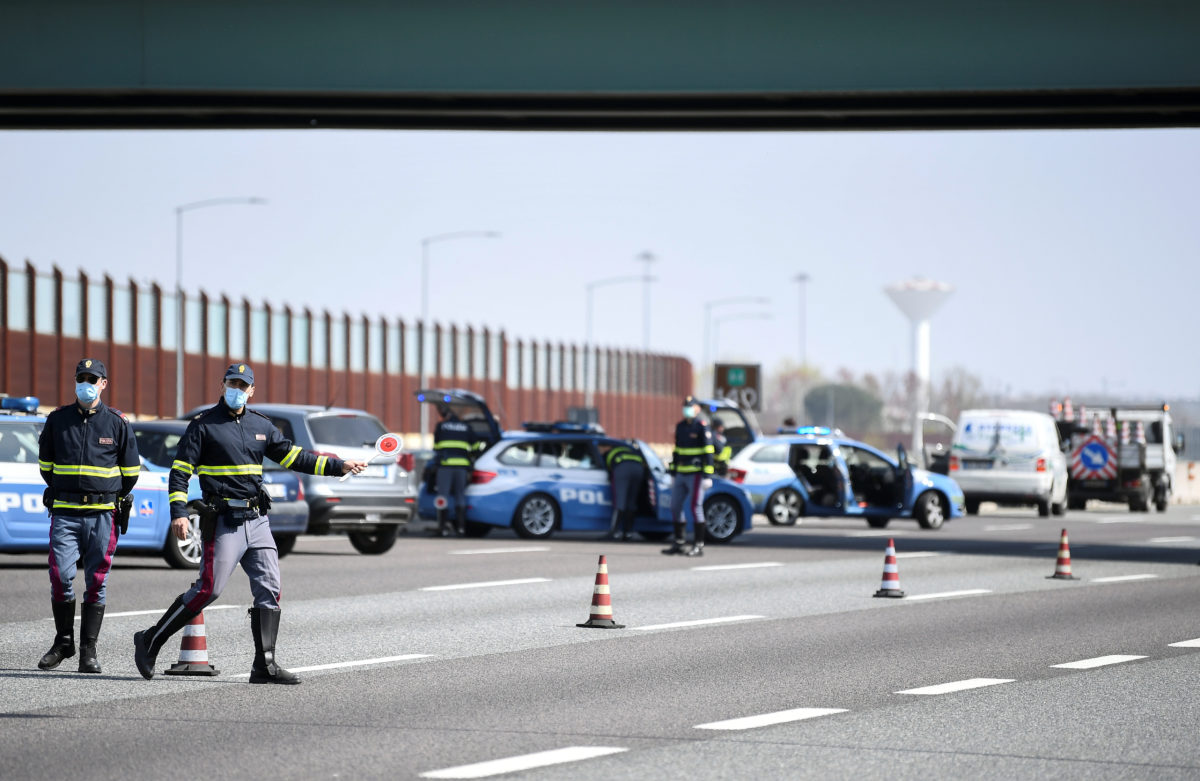 Police officers are seen at a checkpoint on the A4 highway, as Italy struggles to contain a spread of coronavirus disease (COVID-19), near Agrate, Italy March 28, 2020. Photo by Flavio Lo Scalzo/Reuters.

Chopra, who has worked in Detroit for more than 15 years, said many patients have ailments like asthma, heart disease, diabetes and hypertension. She also acknowledged that in Detroit, one of the nation’s largest African American cities, there is a distrust among some in the community of the medical system and government due to systemic racism.

“In Detroit, we are seeing a lot of patients that are presenting to us with severe disease, rather than minor disease,” said Chopra, who worried about a “tsunami” of patients.

Louisiana has surpassed 2,700 infections, with 119 residents dead from COVID-19 — an increase of 36 fatalities from a day earlier, according to the health department. Gov. John Bel Edwards said Louisiana has the third-highest rate of cases per capita and the second-highest death rate per capita, with the region on track to run out of ventilators by the first week of April.

Florida Gov. Ron DeSantis worried that people would flee New Orleans, and he ordered anyone arriving from Louisiana to self-quarantine. He said the Florida Highway Patrol and sheriff’s deputies will set up checkpoints to screen cars from Louisiana.

Trump approved a major disaster declaration for Michigan, providing money for the outbreak. He also has done the same for New York, Louisiana and Illinois.

The governor of Kansas also issued a stay-at-home order to begin Monday, as the virus takes hold in more rural areas, where doctors worry about the lack of ICU beds.

The virus is straining health systems in Italy, Spain and France. Lockdowns of varying severity have been introduced across Europe, nearly emptying streets in normally bustling cities. 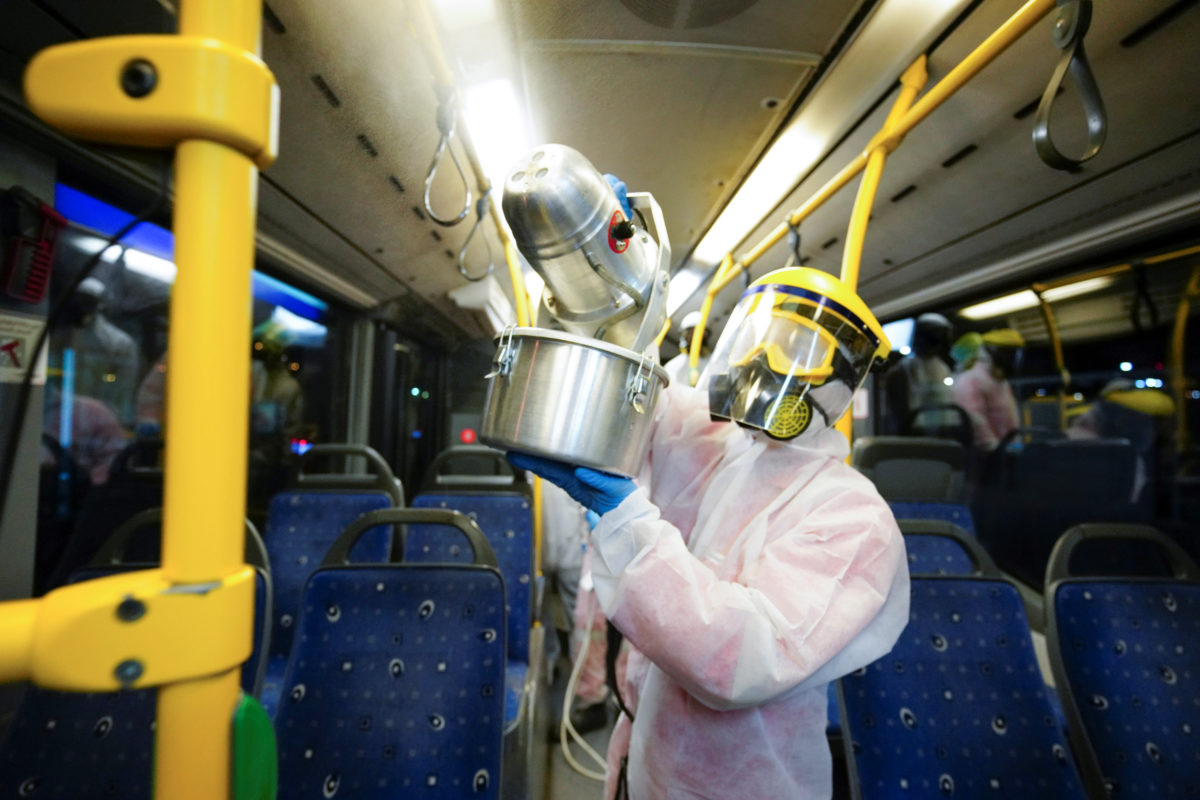 A member of a medical team wearing a protective suit sprays disinfectants inside a bus, after a curfew was imposed to prevent the spread of the coronavirus disease (COVID-19), in Dubai, United Arab Emirates, in this undated handout photo. Government of Dubai Media Office /Handout via Reuters.

German Chancellor Angela Merkel appealed for patience from citizens. Germany has fewer deaths than some neighboring countries but still closed nonessential shops and banned public gatherings of more than two people, and Merkel’s chief of staff said the restrictions won’t be relaxed before April 20.

Spain, where stay-at-home restrictions have been in place for nearly two weeks, reported 832 more deaths Saturday, its highest daily count yet, bringing its total to 5,690.

Another 8,000 confirmed infections pushed that count above 72,000. But Spain’s director of emergencies, Fernando Simón, saw hope in that the rate of infection is slowing and figures “indicate that the outbreak is stabilizing and may be reaching its peak in some areas.”

Doctors, nurses and ambulance drivers in Spain’s worst-hit regions are working nonstop and falling ill at an alarming rate. More than 9,000 health workers in the country have been infected.

“We are completely overwhelmed,” said paramedic Pablo Rojo at Barcelona’s Dos de Maig hospital. “Seven or eight (patients transported today) and all with COVID-19. … And the average age is decreasing. They’re not 80 years old anymore, they are now 30 and 40 years old.”

Spain has struggled to get coronavirus tests and protective gear for health workers and has begun flights to carry the supplies directly from China.

As the epicenter has shifted westward, the situation has calmed in China, where some restrictions have been lifted. Some subway service was restored in Wuhan, where the virus first emerged in December, after the city had its virus risk evaluation reduced from high to medium. Five districts of the city of 11 million people had other travel restrictions loosened after their risk factor was reduced to low.

For most people, the coronavirus causes mild or moderate symptoms, such as fever and cough that clear up in two to three weeks. But for others, especially older adults and people with existing health problems, the virus can cause more severe illness, including pneumonia, and lead to death.

More than 135,000 people have recovered, according to Johns Hopkins.

Countries are still trying to bring home citizens stranded abroad. On Saturday, 174 foreign tourists and four Nepali nationals in the foothills of Mount Everest were flown out days after being stranded at the only airstrip serving the world’s highest mountain.

Indian authorities sent buses to the outskirts of New Delhi to meet an exodus of migrant workers desperately trying to reach their home villages amid the world’s largest lockdown. Prime Minister Narendra Modi announced a 21-day lockdown that began Wednesday and effectively put millions out of work.

Russian Prime Minister Mikhail Mishustin has ordered his country’s borders fully closed as of Monday. International passenger flights were halted Friday. The order exempts diplomats as well as residents of the Kaliningrad region who must cross through another country to enter the rest of Russia.

Dr. John Brooks of the U.S. Centers for Disease Control and Prevention warned that Americans remained “in the acceleration phase” of the pandemic.

“There is no geographic part of the United States that is spared from this,” he said.

The first death was reported Friday in the rural Michigan town of Cadillac, while numbers grew in Detroit, four hours to the south. Detroit’s homeless populations is especially vulnerable, officials said.

“If any of these individuals got infected, it would be very easy to transmit it to other people without knowing,” said Chad Audi, executive director of the Detroit Rescue Mission, adding he has since opened two new facilities to accommodate an increase in clients and implemented new safety precautions. “But in no circumstances will we close our doors because these individuals don’t have any place to go. It’s very important to us.”