BEIJING — Starkly illustrating the global east-to-west spread of the new coronavirus, Italy began an extraordinary, sweeping nationwide travel ban on Tuesday while in China, the diminishing threat prompted the president to visit the epicenter and declare: “”We will certainly defeat this epidemic.”

Chinese President Xi Jinping’s trip to the central city of Wuhan — his first since the start of the outbreak — was the latest sign that China is edging back toward normal after weeks of extreme quarantine measures to fight the new virus. China reported just 19 new infections Tuesday, down from thousands each day last month.

“Things are slowly returning to normal,” said Yang Tianxiao, a finance worker in Beijing, where the city government is gradually easing restrictions that kept many office workers at home.

Yet in Italy, the situation was anything but normal. Travel restrictions previously limited to the country’s north were extended everywhere, with soldiers and police enforcing bans. Neighboring countries like Malta and Austria slammed their borders with Italy shut, while major carriers like British Airways cancelled all flights to and from the country.

”Get out of northern Italy if you’re there. We don’t know how long the Italian authorities will keep the window open,” Danish Foreign Ministry official Erik Broegger Rasmussen told reporters.

Some 9,172 people were infected in Italy and 463 have died — and many fear the numbers will only worsen.

“We’re only at the beginning,” said Dr. Massimo Galli, head of infectious disease at Sacco Hospital in Milan, where people at the main train station were required to sign forms certifying the necessity of their travel. 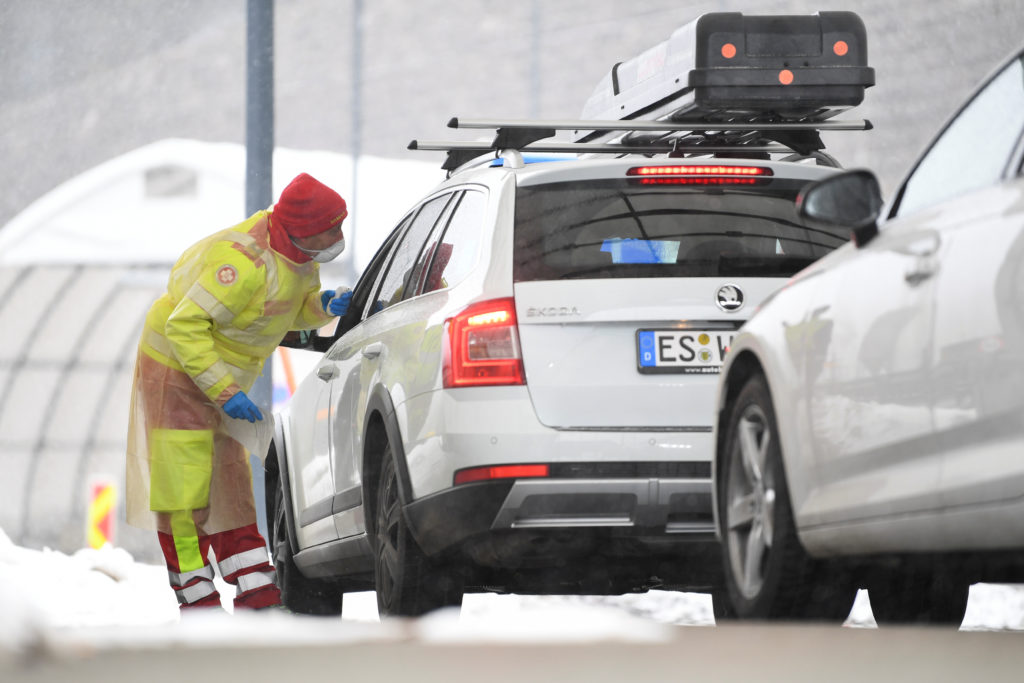 A medic checks the temperature of a driver coming from Italy due to the spreading of the coronavirus disease (COVID-19) in Italy at the Brenner Pass border crossing between Italy and Austria. Photo by Andreas Gebert/Reuters

Outbreaks flared in France, Spain and Germany, and fear grew in the United States, where more than 750 people are infected and several senior politicians were quarantined.

For most people, the new coronavirus causes only mild or moderate symptoms, such as fever and cough. But for some, especially older adults and people with existing health problems, it can cause more severe illnesses, including pneumonia. More than 115,800 people have been infected worldwide and over 4,000 have died.

The World Health Organization says people with mild illness recover in about two weeks, while severe cases may last three to six weeks. In mainland China, where the outbreak emerged in December, almost three-fourths of its more than 80,000 patients have recovered.

The virus has shaken global markets, with stocks on Monday taking their worst one-day beating on Wall Street since 2008 and oil prices suffering their most brutal losses since the start of the 1991 Gulf War.

Asian markets posted modest gains Tuesday, but fear was rampant that economies stood at the brink of recession.

Europe’s airports say they expect 187 million fewer passengers this year due to the virus outbreak, which is “turning into a shock of unprecedented proportions for our industry.”

The ACI Europe, which represents the sector, estimated Tuesday that the outbreak will mean a 13.5% drop in airport passengers in the first quarter alone. That translates to 1.32 billion euros ($1.5 billion) in lost revenue.

Xi’s trip to Wuhan was the latest effort by the ruling Communist Party to shed a favorable light on its handling of the crisis. Xi was conspicuously absent from the public eye during the early days of the outbreak and alarms were not sounded until late January. Wuhan and nearby cities — over 60 million people — have been under lockdown since then.

Xi addressed patients and medical workers via a video link. He also strolled through an apartment complex where residents are still quarantined.

With patient numbers falling, Wuhan closed the last of 16 temporary hospitals used mainly to house those with mild symptoms.

Authorities in Hubei province, where Wuhan is located, stepped up preparations for resuming business production, reopened some roads to restore agricultural production and announced the launch of a color-coded app-based system that will allow people who are deemed healthy to travel freely within the province.

As the novel coronavirus continues to spread in the U.S., the National Institute of Health on Sunday advised vulnerable people, particularly the elderly with underlying health conditions, to avoid large crowds and trips. ProPublica reporter Caroline Chen, who has been reporting on the virus, joins Hari Sreenivasan to discuss what people need to understand about testing, infection rates and more.

But disruptions spread elsewhere, upending life in Italy in particular.

Italy’s far-reaching travel restrictions were to last through April 3 and violators risked up to three months in jail or fines of 206 euros ($225). Schools and universities stayed closed and bars and restaurants must shutter at dusk.

After some panic buying, Conte assured Italians supermarkets would remain open and stocked.

In the U.S., President Donald Trump was planning to announce proposals Tuesday aimed at curbing the economic fallout from the outbreak. He said the measures would include payroll tax relief.

Trump dove into handshakes with supporters Monday and flew back from a Florida fundraiser with a lawmaker who later went into a voluntary quarantine because he came into contact with someone who had tested positive for the virus. Trump’s incoming chief of staff, too, went into quarantine, also stemming from concerns from a conservative political gathering attended by an infected person.

In California, the cruise ship Grand Princess, which had been forced to idle off the coast, docked at the port of Oakland, but only a few hundred of some 3,500 passengers and crew had disembarked by early Tuesday. All of the departing passengers face 14-day quarantines since the ship had at least 21 confirmed virus cases.

As the virus appeared in over 100 countries, the World Health Organization was weighing whether to declare the outbreak a pandemic. WHO chief Tedros Adhanom Ghebreyesus said Monday that “the threat of a pandemic has become very real.”

Panama and Mongolia, which borders China, were the newest countries to announce infections.

Sedensky reported from Bangkok; Leicester from Paris. Contributing to this report were Colleen Barry in Soave, Italy; Nicole Winfield in Rome; Antonio Calanni in Milan; and Ken Moritsugu, Christopher Bodeen in Beijing.

Left: A woman, wearing a protective face mask, walks past a placard showing a handshake between two hands representing the Chinese and the Italian national flags after a decree orders for the whole of Italy to be on lockdown in an unprecedented clampdown aimed at beating the coronavirus, in Milan, Italy. The placard reads "The enemy is the virus, not the people. Come on China!" Photo by Flavio Lo Scalzo/Reuters