What the European Parliament elections mean for Brexit

A decisive showing by the Brexit Party in Britain’s European Parliament elections could further complicate the United Kingdom’s departure from the European Union, experts say.

The European Parliament is the EU’s only directly elected legislative body with 751 members, with seats divided between the 28 countries by population. The parliament can vote on legislation that governs the union and has the final say in the approval of the union’s annual budget. It is not involved in any single country’s lawmaking.

The single-issue Brexit party, led by Brexit hawk Nigel Farage, won’t wield much power inside the massive parliament itself, but it will have an outsized influence on British politics for the next five months as the country prepares to leave the EU by a Oct. 31 deadline.

“There is no more left-right divide. There is only ‘leave’ and ‘remain.’”

That starts with the race to replace outgoing Prime Minister Theresa May, whose critics have been frustrated with her failure to negotiate a Brexit deal with the EU that could pass the British parliament. Farage’s new party, whose name is its platform, won 31 percent of the U.K.’s vote, which amounts to 29 of Britain’s 73 parliament seats. Because Farage was the largest single victor in this latest test of Brexit’s popularity, he will have more influence in the race to replace May, experts on European politics said.

At the same time, a number of anti-Brexit parties, including the Liberal Democrats and the Green Party — perhaps equally vocal, but individually smaller — together won 27 seats.

The country’s historically dominant parties, Conservative and Labour, saw the biggest losses. Heather Conley, Europe program director at the Center for Strategic and International Studies, said voters signaled they wanted more clarity from parties based on whether or not they would support Brexit.

“There is no more left-right divide. There is only ‘leave’ and ‘remain,’” Conley said. 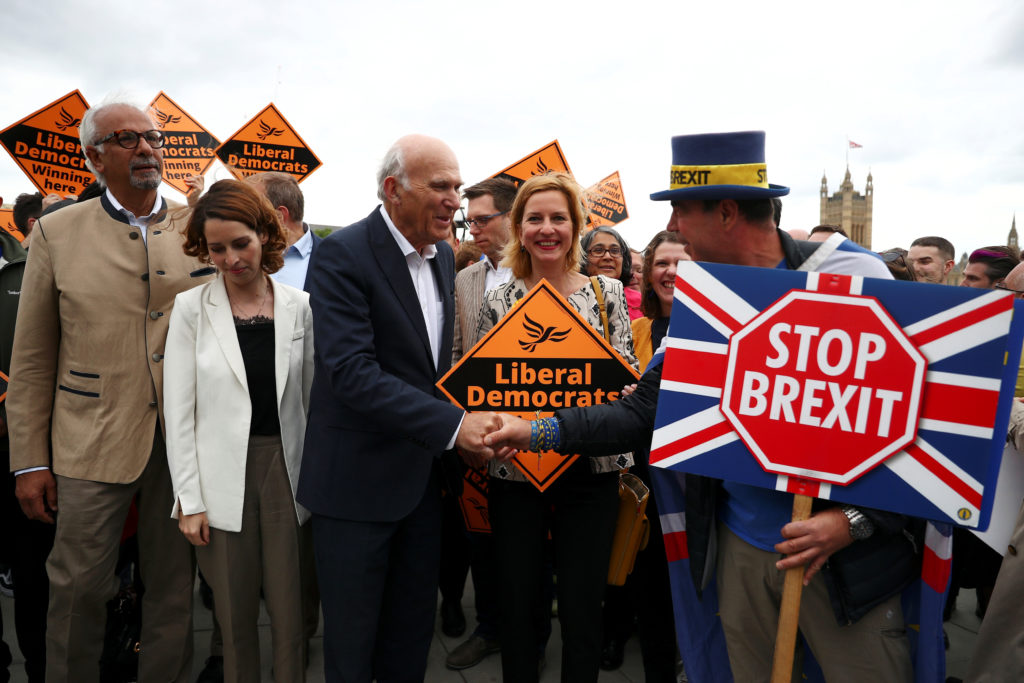 Vince Cable, leader of the Liberal Democrats, shakes hands with an anti-Brexit protester next to new members of the European Parliament, following the results of the elections on May 27, 2019. Photo by REUTERS/Hannah Mckay

“Because we’re in the middle of a Brexit crisis, [the election] will have a political and psychological effect and will push whoever is the prime minister into taking a more hardline position,” said Michael Leigh, a former senior EU official who teaches at the Johns Hopkins School of Advanced International Studies (SAIS) in Bologna.

May will resign as the Conservative Party leader on June 7 but remain as prime minister until a replacement is selected. Already, the top contenders to replace her are jockeying for the title of strongest Brexiteer. In an op-ed for The Telegraph, former foreign secretary Boris Johnson, considered the frontrunner, pledged that he could deliver an improved divorce agreement within four months, a feat that so far has eluded negotiators for three years.

“If we are courageous and optimistic, we can strike a good bargain with our friends across the Channel, come out well and on time — by October 31,” Johnson wrote.

READ MORE: What happened in the European Parliament elections, country by country

But even if the politics of the next prime minister are virtually preordained by Monday’s outcomes, almost nothing beyond that is assured.

Peter Rough, a Europe expert at the conservative think tank Hudson Institute, said it’s possible Johnson, if chosen, will first try to renegotiate the Brexit agreement — which May failed thrice to clear through Parliament. Johnson’s trump card would be the threat of a “no-deal Brexit,” in which the U.K. simply leaves the union without any terms clarifying their relationship on critical issues like trade and travel.

One of the main sticking points Johnson might try to renegotiate is the so-called Irish backstop, a stipulation requiring Northern Ireland, which is part of the U.K., to remain in the EU to avoid a hard border with the Republic of Ireland, an EU member state.

But Conley said it was highly unlikely that the EU would agree to another round of negotiations, despite many hardcore Brexiteers believing it’s possible. 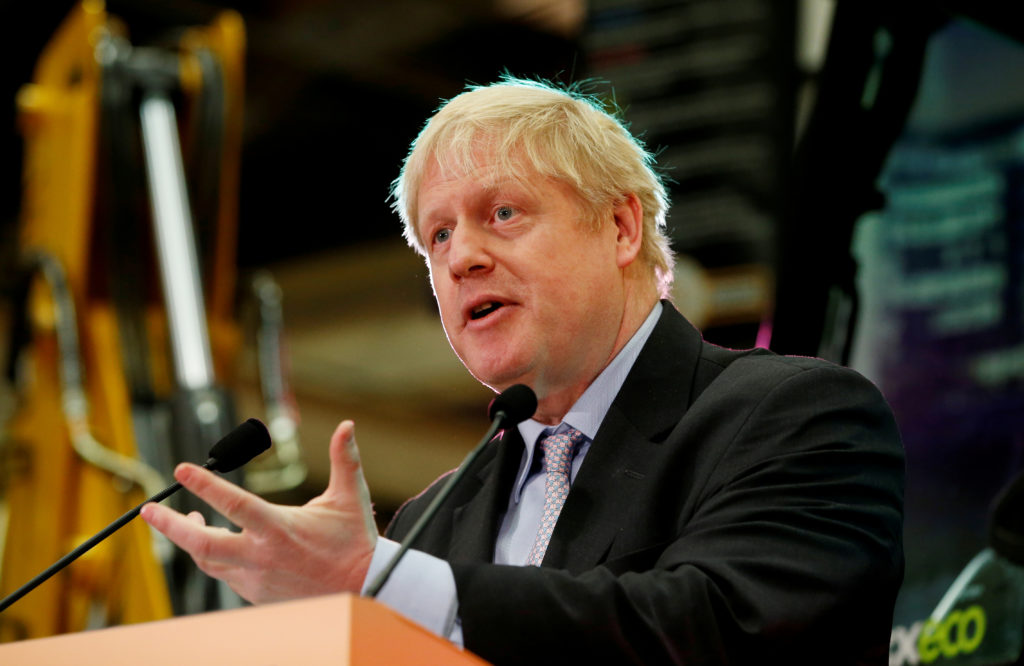 The EU is “not going to cave,” Conley said, “so this is the agreement.”

Conley said it was a possibility – albeit an unlikely one – that the next pro-Brexit prime minister could keep enough of the Conservative Party aligned, despite massive losses in recent local elections, to get the party’s lawmakers to coalesce around the last remaining option: a no-deal Brexit.

“Then you have the setup of a really strong global economic earthquake,” Conley said. She also said Parliament might try to stop the prime minister from departing without a deal, but that right now there’s no law in place requiring a deal, just a nonbinding resolution.

Conley said it was more likely that the next prime minister would fail to form a strong enough coalition. In that case, she said Conservatives might unite with the opposition Labour Party to hold a vote of no confidence, which would ultimately trigger early parliamentary elections in hopes of establishing a clearer mandate for the winning party.

“The one guarantee that we have thus far is that there haven’t been any guarantees.”

Leigh, at SAIS, also said an early parliamentary election was a possibility. The first step, in his estimation, would be for the next prime minister to ask the European Union for another extension, pushing the deadline back a third time from its original March 29 date.

The EU would need a very good reason from the U.K. leadership to acquiesce. Besides carving out time for early elections, the EU might also be amenable to delaying the deadline for a second Brexit referendum, Leigh said.

“The question for the second referendum at that point would only be, ‘Do you want to leave the EU without an agreement or do you prefer to remain in?’” he said.

Public opinion polls have yielded mixed results when it comes to which option would win in a second referendum, subject to discrepancies in questions and methodology.

But at least one thing is clear, according to Rough.

“The one guarantee that we have thus far is that there haven’t been any guarantees,” he said.

Left: Brexit Party leader Nigel Farage waits to speak during the results for the European Parliamentary election in Southampton, Britain, on May 27, 2019. Photo by REUTERS/Hannah McKay