The New Zealand attack that left dozens dead is shocking, but far from an isolated event amid the growing number of hate crimes against Muslims, advocacy organizations say.

The attack appears to be motivated by white supremacy and anti-immigrant ideology and is being investigated as a terrorist attack. The suspected shooter left a detailed account of his views through social media postings, including a 74-page “manifesto” filled with racist sentiments and conspiracy theories.

People who study extremism say attacks against immigrants and Muslims have been on the rise as anti-immigrant views have gained traction across the world, including on the political stage.

“The trend lines have been building for years but people and governments have been ignoring it,” said Humera Khan, the president of Muflehun, a nonprofit that works to combat hate, extremism and violence.

What the data shows in the U.S.

Federal data on hate crimes can be difficult to come by. Since 1968, it has been a crime in the United States to threaten any person because of race, color, religion or national origin, but how those crimes are investigated and categorized varies by state. Many states do not have local hate crime laws. Others are not required to report them to a centralized federal database. 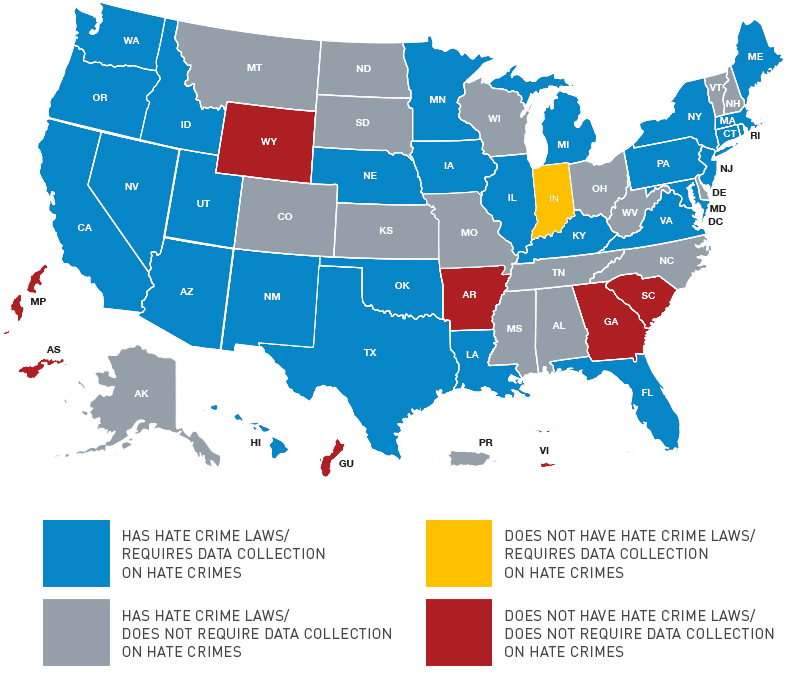 Source: The Department of Justice

The nation’s largest Muslim advocacy organization keeps its own tally. From 2016 to 2017, U.S. incidents that were attributable to anti-Muslim bias increased 17 percent, according to data from the Council on American-Islamic Relations. There were 2,599 instances in 2017, according to the group, which tracks and investigates incidents reported in the media and to its local chapters.

Hate crimes against Muslims, which is a specific legal designation, rose by 15 percent for a total of 300 incidents in 2017, according to CAIR.

The FBI collects information from states that report these crimes voluntarily or are required to report their data by state law. Based on that information, the FBI said hate crimes against all groups rose 17 percent from 2016 to 2017. That’s despite the fact that all violent crimes decreased 0.2 percent in the same time period.

But CAIR argues abuse against Muslims is sometimes perpetrated by law enforcement agencies themselves. The group said 13 percent of abuse cases it recorded were by U.S. Customs and Border Protection. Another 10 percent were cases of harassment or inappropriate targeting by the FBI.

The rise of anti-immigrant rhetoric and politics

Across the world, anti-immigrant sentiment has been gaining traction and fueling political sea change.

President Donald Trump has regularly used anti-immigrant language and backed policies aimed at reducing immigration to the U.S., including his push for a border wall and his ban on visitors to the U.S. from several Muslim-majority countries.

Trump condemned the attack in an early morning tweet, calling it a “horrible massacre.” In a subsequent tweet Trump said he had spoken with New Zealand’s prime minister and told her Americans “stand in solidarity” with the country.

But at an appearance later Friday in the Oval Office, where Trump vetoed a resolution rejecting his national emergency declaration for the Southern border, the president was asked if he saw white nationalism as a rising problem. Trump said he did not see it as a major threat.

“I think it’s a small group of people that have very, very serious problems,” he said. “I guess if you look at what happened in New Zealand perhaps that’s a case. I don’t know enough about it, yet. They’re just learning about the person and the people involved. But it’s certainly a terrible thing, a terrible thing.”

Trump drew criticism Friday for not speaking out more forcefully against the attacker in New Zealand. He has faced similar disapproval in the past, including when he blamed “both sides” for the violence at a white nationalist rally in Charlottesville, Virginia, in 2017.

Racist rhetoric can encourage attacks, Khan said, but bloodshed like the New Zealand killings can also be “copycat” violence.

In his manifesto, the New Zealand suspect mentioned a number of past attackers, including Anders Breivik, the man who killed 77 people in Norway in 2011, and Dylann Roof, the white supremacist who in 2017 murdered nine people at Emanuel African Methodist Episcopal Church in Charleston, South Carolina.

What governments are doing to combat hate

Nonprofit organizations and government leaders have made efforts to combat violent extremism, including far-right extremism.

The European Union established the Radicalisation Awareness Network, which seeks to prevent all kinds of extremism, including from both jihadists and the far-right.

After a 2017 deadly mosque shooting in Quebec, Canada launched a national center for community engagement to prevent violence and radicalization.

Australia funded the Intervention Support Hub, an initiative aimed at countering violent extremism, but the program has been criticized for focusing too much on prosecution and not on addressing the underlying issues that lead to violence. 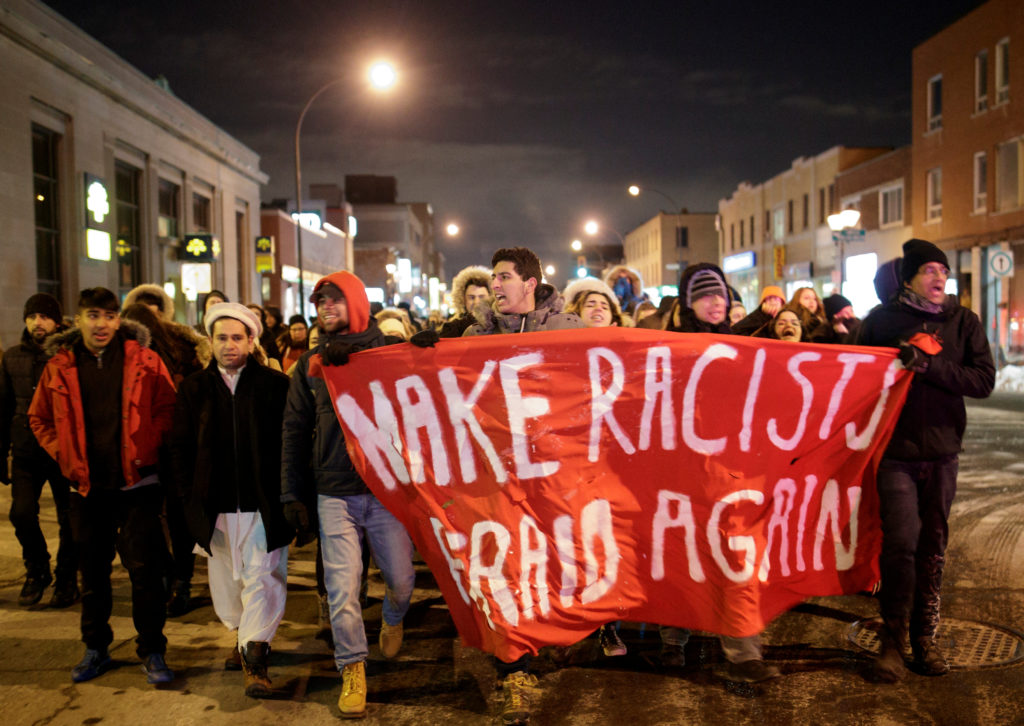 People take part in a march through a mostly immigrant neighborhood following a vigil in support of the Muslim community in Montreal, Quebec on January 30, 2017. After the shooting, Canada created a center to combat violent extremism. Photo by Dario Ayala/Reuters

The U.S. also has programs to counter violent extremism, but they have largely been focused on combating jihadism and less focused on far-right ideology and white supremacy, experts say.

In 2016, the Obama administration created the Countering Violent Extremism Grant Program, which provides grants for groups that aim to combat all forms of violent extremism. But the Trump administration last year pulled grant funding from the only group that specifically fought white supremacist ideology.

Efforts to focus more on violence from the far-right have been led by nonprofit groups like the Southern Poverty Law Center, which tracks what it considers terror attacks.

For years, Islamic extremists have projected their views as a global ideology, making it easier for national security organizations and politicians to take notice, said Shahed Amanullah, a former senior advisor for technology at the State Department.

Experts say Friday’s events should serve as a wake-up call that far-right extremism must be seen as a substantial threat.

“We have to take them seriously that this is a global struggle, transnational,” Manullah said. “After today, there’s no excuse not to.”

The PBS NewsHour’s Ali Rogin contributed to this report