What will King Charles’ ascension mean for the Britain’s overseas territories?

King Charles III has ascended to the British throne following the death of Queen Elizabeth II, Britain’s longest ruling monarch. In addition to being king of the United Kingdom (UK), Charles also became the head of state of more than a dozen other independent countries that were once British colonies. What is the Crown’s role in these overseas monarchies, and how could it change?

How does the succession work?

Queen Elizabeth II was the longest-serving British monarch in history, having ascended to the throne in 1952 at age 25. Upon her death, her eldest son became king under the name Charles III. His rule begins immediately, but the official coronation ceremony will likely come in 2023.

Charles, who was heir to the throne longer than anyone else in British history, developed numerous personal interests and causes that experts say could influence his rule. He has taken a forceful stance on environmental issues, declaring the world must adopt a “war-like footing” to combat climate change. He is involved in more than 400 charities. And he has strong views in favor of traditional architecture and regenerative farming.

Which countries recognize Charles as king?

Charles, like Elizabeth was, is not only monarch of the UK, but also of 14 additional countries, including Canada and others across the Asia-Pacific and the Caribbean. These are known as the Commonwealth realms. They are distinct from the Commonwealth of Nations, a loose grouping of 54 countries that were once part of the British Empire, but most of which are no longer subjects of the monarchy. 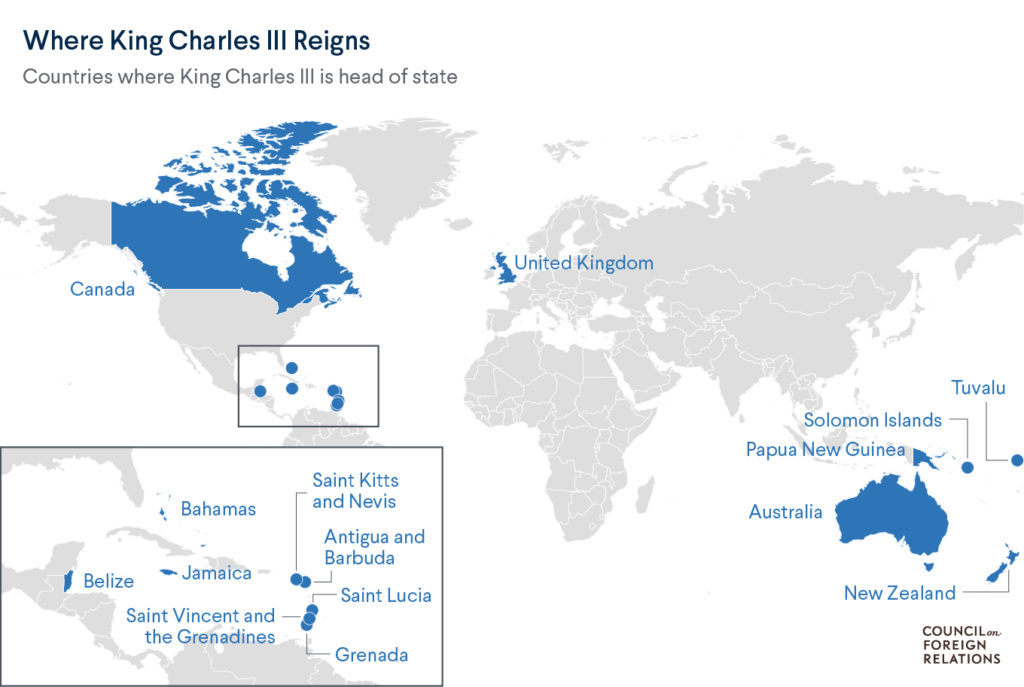 Graphic provided by the Council on Foreign Relations

Together, there are some 150 million people in the Commonwealth realms, the most populous of which are the UK, Canada, Australia, Papua New Guinea, and New Zealand.

Together, there are some 150 million people in the Commonwealth realms, the most populous of which are the UK, Canada, Australia, Papua New Guinea, and New Zealand.

How did the Commonwealth realms evolve?

In the wave of decolonization that occurred after World War II, dozens of newly independent countries emerged out of the remnants of the British Empire. Many of these, including India, Nigeria, and Pakistan, became republics, discarding the monarchy altogether and replacing it with another head-of-state figure, usually a president. That decades-long process continues to unfold: the latest country to leave the monarchy behind was Barbados in 2021. Altogether, 17 countries left during Elizabeth’s reign.

Still, policymakers in the countries that retained the monarchy saw the institution as a valuable source of political legitimacy and stability. Keeping the queen as their sovereign gave them a visible and nonpartisan symbol of national unity and constitutional continuity. From London’s vantage, meanwhile, the queen’s role overseas, including her many visits to the Commonwealth realms, was a source of British soft power and diplomatic influence.

What actual powers does the king have in overseas realms?

Commonwealth realms are constitutional monarchies, where the monarch’s powers are largely symbolic and political decisions are made by an elected parliament and implemented by prime ministers. Monarchs are thus head of state but not head of government—meaning they are not involved in day-to-day governing. (In the United States, by contrast, the president is both head of state and head of government.)

The monarch does have some constitutional duties, the most significant being the approval of new governments. A monarch may also formally approve legislation, appoint certain officials, or grant state honors. Outside of the UK, a royal representative known as a governor-general is appointed to carry out these duties.

In exceptional circumstances, the Crown also has what are known as “reserve powers,” or the authority to unilaterally override the elected government. This has happened rarely since World War II, the most notable example being Australia’s 1975 constitutional crisis, in which the governor-general dismissed a sitting prime minister.

How could the role change under Charles?

Given the largely symbolic nature of Charles’ role as head of state, observers say little will immediately change in the Commonwealth realms.

However, many experts foresee that the royal succession could strengthen existing republican movements in the realms. Jamaica’s prime minister had already announced that the country intends to leave the monarchy. The leaders of Belize and of Antigua and Barbuda have signaled similar intentions.

This push is linked to a renewed focus on the legacy of the British slave trade in the region: the Caribbean Community (CARICOM) has pressed the UK and other European governments for reparations, and Jamaica has directly petitioned the British Crown. Charles has acknowledged his “personal sorrow” at the atrocity of the translatlantic slave trade; however, he has not issued a formal apology or addressed the issue of reparations.

Elsewhere, too, Charles’ rule may face a challenge. Canadian support for a break with the monarchy remains a minority view, but one that has been growing sharply. Australia’s prime minister is a long-time republican advocate who supports a fresh referendum on the issue. New Zealand Prime Minister Jacinda Ardern likewise supports moving past the monarchy.

Experts say Elizabeth’s longevity commanded a certain level of deference even among republicans, as most citizens of Commonwealth realms today have never known any other head of state. But they say that with her passing, that respect for the monarchy could slip, especially given Charles’ lower popularity and accusations of racism against the royal family made by Duchess of Sussex Meghan Markle. If so, the British monarchy’s global role, and the UK’s soft power, could further diminish.

This article is republished from The Council on Foreign Relations. Read the original article.

Left: People walk by as a tribute to Queen Elizabeth appears on the National Arts Centre, after Queen Elizabeth's passing, in Ottawa, Ontario, Canada, September 8, 2022. Photo by Patrick Doyle/REUTERS