A decade of data clearly shows police in Utah disproportionately shoot at racial and ethnic minorities. What isn’t so clear is what to do about it.

For years, police, politicians and activists have called for more and better de-escalation and implicit bias training as a solution.

After last summer’s reckoning on police violence, arising from George Floyd’s murder in Minneapolis, lawmakers in Utah passed a bill that increased the required hours spent on de-escalation training. Legislators also required officers to receive training on how to interact with people in a mental health crisis, in response to a Salt Lake City police officer shooting and critically injuring a 13-year-old boy with autism.

But some national experts say racial bias in police shootings, and in policing generally, isn’t a problem fixed solely by more training.

Justin Nix, a criminology professor at the University of Nebraska Omaha, points to a significant body of research into how people’s minds make decisions under duress. They tend to make mistakes.

“And so officers, being human beings, albeit trained human beings with great responsibility,” he said, “they’re going to screw up every now and then and make a mistake.”

He said some of these mistakes — like shooting an unarmed person — are the product of stereotypes that have been “ingrained over lifetimes.”

If bias can’t be fully trained away, what else can be done? Here are a few options law enforcement experts proposed to The Salt Lake Tribune:

Don’t pull people over so often

Chris Burbank, a former Salt Lake City police chief who now works at the Center for Policing Equity, has encouraged departments to do away with traffic stops.

He said research shows racial and ethnic minorities are disproportionately impacted by them and that disparity helps fuel the disparity we see in police shootings. He also argues stopping people for traffic violations doesn’t make roads that much safer.

In Minneapolis, where Floyd was killed, the Star Tribune recently reported the police department is going to stop pulling over cars for minor infractions, like driving with expired registration.

Fayetteville, N.C., police dramatically cut back on so-called nonmoving violations between 2013 and 2016 and aggressively focused traffic enforcement on offenses like speeding, DUIs and reckless driving, USA Today reported. Traffic stops in general increased, but the number of searches of cars with Black drivers dropped dramatically.

Police Chief Harold Medlock told USA Today that traffic fatalities, officer uses of force, injuries to both civilians and officers, and complaints against officers all declined.

Across the country, cities are creating specialized teams to respond to mental health-related calls. Instead of armed officers, who may or may not be proficient in crisis intervention, police departments are sending unarmed mental health professionals, some with or without armed officers for support. The hope is that these new teams will reduce police shootings of people in mental crisis.

Salt Lake City police’s civilian crisis workers almost always go out to mental health calls with an armed detective or patrol officer because those encounters can be “volatile,” said Detective Michael Ruff. He added that department leaders have been discussing more options for using unarmed officers for traffic enforcement and some mental health calls.

In 2020, at least 40% of people Utah police shot at were experiencing a mental health event, according to Tribune data.

Delores Jones-Brown, a professor emerita at the John Jay College of Criminal Justice in New York City, said if fewer officers who worked in communities where racial and ethnic minorities predominantly live had guns, it “would certainly diminish the opportunity for those people of color to be shot and killed or shot and injured.”

She said traffic enforcement, especially for departments that aren’t trying to phase it out, is also an area where police could cut back on guns.

Jones-Brown said that law enforcement officers push back on this idea, saying they would be “outgunned,” but she is working on a project with two former Black officers who agree with her. So do the people on the “receiving end” of these deadly uses of force.

“It’s only a hard sell,” she said, “to those folks who want to come on to policing, who have bought into this idea that there are good guys and bad guys and the police are always the good guys.”

West Jordan Police Chief Ken Wallentine, who is the president of the Utah Chiefs of Police Association, said there are some unarmed officers in his department now. They mostly respond to minor traffic accidents or car burglaries, where the risk is relatively low. He said he sees the possibility of police departments moving in this direction — but added that sometimes even mundane calls can turn dangerous.

On the day he spoke with a reporter, he said someone had pulled a gun on an officer during a traffic stop earlier that morning.

“It resolved really quickly, that our officer retreated to the rear of the car and drew his gun and shouted commands,” he said. “But, as a police chief, would I want an unarmed, nonuniform police officer to handle that? I don’t think so.”

Wallentine feels strongly that the focus should remain on training. He believes the key is de-escalation and teaching officers about their biases.

“We’re still sorting out in the police service world what de-escalation training is the most effective,” he said. “But I think it’s critical. And we all have biases. It is so important to help officers understand that they do have biases.”

Many of the reform efforts in Utah have focused on training. In addition to the bill that requires more mental health and de-escalation training for accreditation, training was the focus of the first recommendations from Salt Lake City’s newly formed Racial Equity in Policing Commission.

Verona Sagato-Mauga, with the commission, said having more and better training in racial bias, de-escalation and mental health will reduce shootings overall and address the disparate use of force against different races.

Jeanetta Williams, president of the Salt Lake branch of the NAACP, had said she also wants more training. Williams is now part of the state’s Peace Officer Standards and Training council, which sets law enforcement policy and disciplines officers.

“Where we go from here is, we look at every training opportunity we can give to the officers,” she said, “and make sure they take it — that it’s not just a one-time training.”

Jones-Brown also said training can be valuable — especially when Black officers and civilians are leading the sessions.

That way, she said, they can counter the “implicit nature of anti-Black racism,” she said. Having more Black officers would help as well.

She has conducted research analyzing police data on uses of force and then spoken with officers who were there about what happened.

Whatever ways officials choose to address these disparities, Jones-Brown said it’ll be a “long journey,” because racism and bias are so entrenched in the U.S. and particularly the criminal justice system.

This story is part of a collaboration with The Salt Lake Tribune through FRONTLINE’s Local Journalism Initiative, which is funded by the John S. and James L. Knight Foundation and the Corporation for Public Broadcasting. 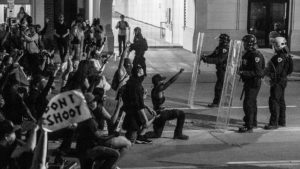