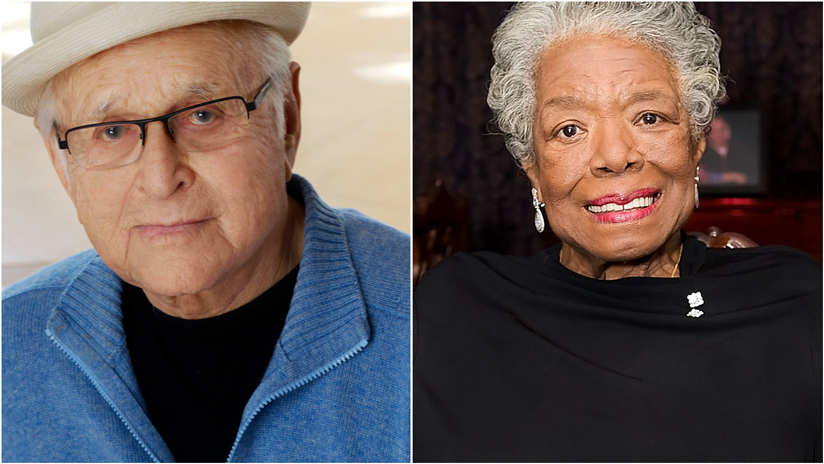 Norman Lear (left) and Maya Angelou (right) are subjects of American Masters in 2016.

On Monday, the Sundance Institute announced its feature film lineup for the 2016 Sundance Film Festival, January 21 – 31, which takes place on screens in Salt Lake City, Sundance, Ogden, and Park City, Utah. Among the documentary premieres are two films that audiences all over the country can see by tuning in to American Masters on PBS in the Fall of 2016: Maya Angelou And Still I Rise (directed by Bob Hercules, Rita Coburn Whack) and Norman Lear: Just Another Version of You (directed by Heidi Ewing, Rachel Grady).

The Maya Angelou: And Still I Rise production was announced here on American Masters after the death of the great poet and writer Maya Angelou on May 28, 2014. The filmmakers had last interviewed Angelou in January 2014.

One of the greatest influencers of comedy television — Norman Lear — is given the Day One treatment at the film festival, screening with three other films on January 21. American Masters announced its Norman Lear production in June. Of his inclusion in the biographical series, Lear, whose name is synonymous with the sitcom, commented, “It’s astounding to be a subject of American Masters when in your heart you know you are still only nine years old.”

The two documentaries are given the following summaries in the Sundance Festival announcement.

Norman Lear: Just Another Version of You: How did a poor Jewish kid from Connecticut bring us Archie Bunker and become one of the most successful television producers ever? Norman Lear brought provocative subjects like war, poverty, and prejudice into 120 million homes every week. He proved that social change was possible through an unlikely prism: laughter. World Premiere on Thursday, January 21.

Maya Angelou: And Still I Rise: The remarkable story of Maya Angelou — iconic writer, poet, actress and activist whose life has intersected some of the most profound moments in recent American history. World Premiere on Tuesday, January 26.