This short film is an extended look at some of the themes explored in American Masters – Becoming Helen Keller, and aims to provide an updated representation of modern DeafBlind role models today. Elsa Sjunneson is a DeafBlind professor and media critic, skilled fencer and hiker, and published author who has written for Marvel Comics. This version contains audio description and ASL interpretation.

You can watch this film without audio description and ASL interpretation here.

You can watch this film with extended audio description here.

STREAM WITH PASSPORT
Becoming Helen Keller
About the Master 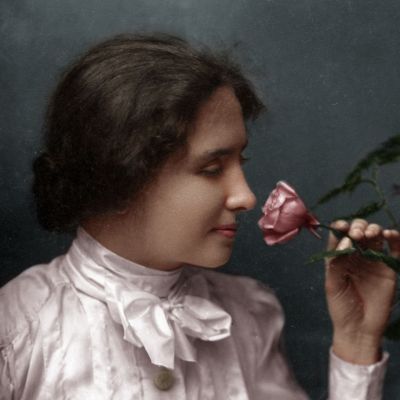 [TRANSCRIPT with visual descriptions: Video opens to the sun shining through trees. A street sign reads: SLOW - CHILDREN AT PLAY. Power lines hang across a white house with a wooden door. Elsa is seen walking outdoors with a white and red cane.]

ELSA SJUNNESON: I've always come into rooms with a force, and I've always been the kind of person who doesn't take no for an answer if there's an injustice to be dealt with.

[A collection of items in Elsa’s room is shown. A cross stitch reads: “I refuse to die until things are better and that is a THREAT.” A poster reads: “HANGOUT FOR QUEERS.” A fake eyeball, more artwork, Elsa’s book, “BEING SEEN,” an award for Best Fan Writer. Another cross stitch reads: “I WROTE MY WAY TO REVOLUTION.”

ELSA: I think a lot of people hear the word Deafblind and they assume that I'm going to be quiet and I am loud. I am snarky, I'm sarcastic. I talk a lot. Those are things that I think surprise people.

[Elsa appears on screen in a fencing lame. She is a fair-skinned woman with glasses, hearing aids, and straight hair tied back into a ponytail.]

ELSA: I am Dame Elsa of the order of the bat. I am a knight errant against ableism.

[Elsa is now seen in her office wearing a gray top and a gold necklace. Text on screen reads: Elsa Sjunneson.]

ELSA: I wear vintage dresses and I deal with the problems as they come. I am a Deafblind speculative fiction writer, a memoirist, a fencer, a swing dancer, a hiker.

[Footage plays of Elsa walking outdoors and sitting at her desk.]

ELSA: There's a misconception that people have that blind people aren't body conscious or aware of where they are in space.

[Elsa’s hand grazes a set of books in a bookcase.]

ELSA: There's a concept called Deaf gain, and it's the idea that Deaf people don't just have a loss. There's also a gain to being Deaf because you have that laser sharp focus. There are no two deaf blind people that are exactly alike. The spectrum is so vast that I can't even really explain it.

[A full-screen photo is shown of a young Elsa, standing outdoors with short hair. Elsa is now seen taking off her fencing mask.]

ELSA: I remember my coach looking at me as I like took out my hearing aids and put my glasses down. And I looked at him and he was like, you realize you're better than everybody else on this team right now.

[Another photo of a young Elsa is shown before showing current day Elsa at the beach.]

[Back to Elsa in a fencing match with another person.]

[Camera pans up from Elsa’s rainbow socks and bright shoes during the fencing match.]

ELSA: And from that point, I can basically model my whole world off of my body awareness. I'm pretty sure they're going to try and take advantage of my blind side. So I move my arm out, block with the parry, and what I know is that their sword just connected really hard with my sword.

[Another photo of a younger Elsa holding a sword and wearing a helmet.]

ELSA: Nine years old, I was going to a French camp in the San Juan Islands. I remember getting to pick up the sword for the first time, and I remember that it was a cool summer breeze. And then I could see the pine trees and the sun and I could smell the ocean.

[Footage of Elsa walking at the beach and footage of her fencing are interspersed, then back to Elsa in her office.]

[Photos are shown of a young Elsa, old family film photos with her parents.]

ELSA: It was a complex upbringing. My parents were told that they should put me in an institution and have another baby after I was born. by my pediatrician, and I heard that story and I remember sort of thinking about how awful that seemed. My parents responded to the concept of institutionalizing me with a no because they really wanted a kid. And I don't think that they had planned to have another one. So I have a lot of empathy for my parents. But I also feel like there was a certain degree of hiding my disability that happened. When you're being raised by queer parents who were living with the reality of the AIDS crisis. My father had AIDS. I think he knew that he had an illness he was disabled by.

ELSA: There were a lot of things to hide because society told us to.

[A sign in Elsa’s office reads: VISIBLE DISABILITY IN PUBLIC IS AN ACT OF CIVIL DISOBEDIENCE -ELSA SJUNNESON. A stained glass rainbow heart hangs on her wall.]

ELSA: My father taught me how to be an advocate for disabled people and queer people everywhere.

[Elsa’s book, “BEING SEEN,” appears on screen. A text excerpt includes: Chapter 1, The Building Blocks of Blindness. Chapter 7, How I Learned to Drive, Play with Swords, and Other Things You Shouldn’t Do at Home. Chapter 4, My Body and Other Histories. Chapter 14, Welcome to the Cyberpunk Future, It’s in My Ears.]

ELSA: I've been writing about the topic of disability representation and media for ten years. At a certain point, you have enough material that you need to write a book because you've written too many essays. I woke up one morning and there was an email from Marvel in my inbox. Here's an email that says, want to write for Marvel: The Women Anthology? And I said yes because that's what you do when you're a comic book nerd and an email from Marvel lands in your inbox.

[Elsa now sits in front of a large bookcase, holding a comic book.]

ELSA: This is Women of Marvel number one, which I was lucky enough to be a part of. And I got to write Peggy Carter, which was pretty cool.

[Bright and bold illustrations from the comic book are shown: two women working together in physical combat.]

ELSA: They made a disabled woman look competent and awesome, and they didn't for one second make her disability about fetishization and I felt like the artist really got what I was asking for. I went to the comic book store to buy my own copy, and I walked in and I was like, do you have women of Marvel, number one? And they were like yes, we do. And I picked it up and I was like, Yeah. So I wrote this, and the comic book nerds were very excited.

[Elsa picks up a new book titled with the word “Uncanny” printed across the front.]

[Another photo is shown of a young Elsa standing with a woman. Elsa is seen walking for a brief moment before a montage of old Helen Keller photos are displayed in full screen: Black and white portraits and video footage of Helen smelling flowers, sitting with a dog, and communicating with others.]

ELSA: When I was much younger, there was a picture book about Helen Keller that we read in my elementary school, and then we watched The Miracle Worker when I was in high school when I was a kid the representation that I got was she learned how to speak by standing next to a water pump by her teacher, and that was kind of it. And if you're a deaf blind kid who is oral, who speaks a mile a minute, you're not going to resonate with that.

[A bronze statue of a young Helen Keller is shown, followed by black and white video footage of an adult Helen Keller speaking at a microphone next to Anne Sullivan, then footage of her standing with two dancers.]

ELSA: We only ever hear the story up until she signs water at the water pump. And then we forget that she was also a socialist, that she performed on vaudeville circuits like this was a completely different person. But we choose as a society not to look at her as an adult.

[Back to Elsa on the beach.]

ELSA: There is a burning fire in my chest every single day, and it has been there since I was a little girl.

[A photo of a young Elsa wearing rollerskates.]

ELSA: And I think that that rage comes from existing in a world that wants to define me constantly based on their own decisions of who I should be.

[Tweets from Elsa are on screen. The tweet reads: “And when I say BITE ME, let me unpack that! What I mean is: Helen Keller was NOT a fraud! She went to college, learned how to read, write, and communicate. So did I! So did @HabenGirma. So have many other Deafblind people!” The tweet has hundreds of retweets and thousands of likes. Another one of Elsa’s tweets read: “I actually am Deafblind from birth! (smiley face).]

ELSA: Sometimes I'll be on Twitter minding my business, and somebody will roll along and say, You're using a sighted Twitter client, you're not really blind. And then I will get really angry because nobody gets to tell me who I am. Perspectives of disabled people need to be seen being seen is important and being a part of society is important. I hope people don't forget that they don't need a degree in disability studies. They don't need to be disabled. They just need to be willing to listen. Every single piece of work I do is about forcing my way through the door.

This program was produced by Cameron S. Mitchell Productions in association with The WNET Group.

This program was made possible by Corporation for Public Broadcasting.

Louisa May Alcott: The Woman Behind 'Little Women'
The Day Carl Sandburg Died
The Source: The Story of the Beats and the Beat Generation
James Baldwin: The Price of the Ticket
Garrison Keillor: The Man on the Radio in the Red Shoes
Willa Cather: The Road is All