When N. Scott Momaday won the Pulitzer Prize for his book “House Made of Dawn,” it was a victory for the entire Native American community. Hear Jeff Bridges, Joy Harjo, Robert Redford and James Earl Jones explain the importance of Momaday’s writing.

STREAM WITH PASSPORT
N. Scott Momaday: Words From a Bear
About the Master 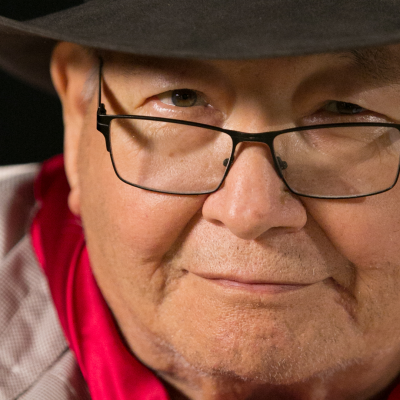 (Native American Music) - 'A House Made of Dawn' was a whole different world; it changed everything about literature.

We all felt like we had some part in it, some stake in it, because here was an Indian who had won a great award and it was very public.

who had won a great award and it was very public.

- I hope. (crowd applauses) - When Scott won the Pulitzer, it was electrifying for a whole generation of Native Americans.

- [Announcer] I'm so honored to present this lifetime achievement award to my friend and colleague N. Scott Momaday. (applause and cheering) - When I look at the Native American Culture and how they pass on information to generations to come, it's through stories.

And what Scott has done, without losing the value of oral storytelling, he has been able to move it into writing.

And that's what got me, because I thought his voice was that of a storyteller.

But, because he had this poetic ring to it, it took on a whole different...tone, and I think that's why I got hooked on Scott.

- I am a feather on the bright sky.

I am the blue horse that runs in the plain.

I am the fish that rolls shining in the water.

I am the shadow that follows a child.

I am the evening light, the luster of meadows.

- [Scott] I'm an eagle playing with the wind.

I'm a cluster of bright beads.

his smile, his essence was just kinda fill the room.

And then, of course, when he opened his mouth, that voice.

I am the cold of the dawn.

- I got a wonderful, wonderful hit off the guy.

I'm the glitter on the crust of the snow.

- The spirit lives in the voice, so everybody could hear that he was carrying something very profound and very important.

- I love it because of the simplicity.