Just as Miles Davis’s music evolved through his life, so did his sense of style, exemplifying what it meant to be “cool” with in both how he played and how he dressed.

In the 1950s and 60s, Miles Davis was tying new ways of recording albums, even eschewing the idea of rehearsals and sheet music. Likewise, his clothing in this era reflects a casual disregard for rigidity. As pictured in this photo from 1959, Davis’s timeless outfit consists of a form-fitting pale pin-stripe suit and statement watch.
Embed from Getty Images

A contrast from the wide shouldered zoot suits of the 1920s and 30s worn by performers like Cab Calloway, Davis’s suits were tightly tailored to his form. Instead of the staple white shirt or dark tie of the 50s, Davis paired jackets with knits, turtlenecks and cravats – fashioning suits to exude his brand of modern informality.

“He was chic; I was chic and then of course getting in and out of a Ferrari. I mean we were a hot couple, there’s no two ways about it. Miles and Frances on fire.”

“I was sharp as a tack every time I went out in public and so was Frances. . . people stopping and looking with their mouths hanging open.” 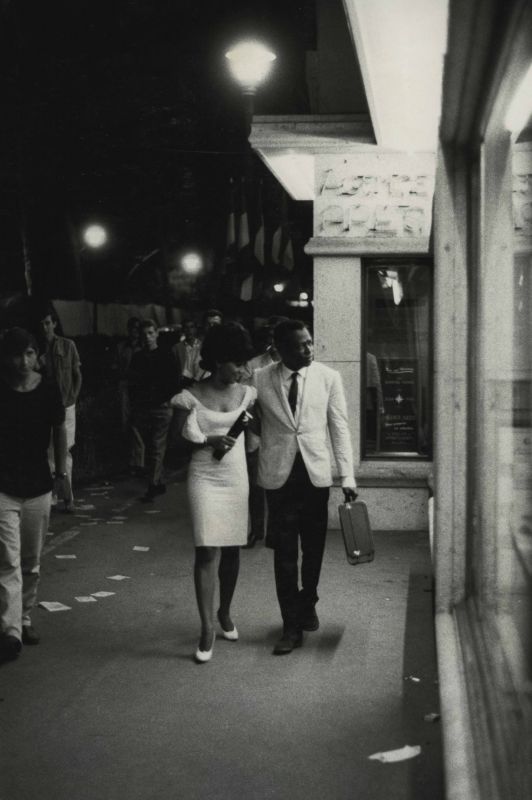 In this image from 1963, both Davis and Taylor sport crisp white outfits with chic, minimal accessories. Their power as a couple is visible in their confident matching attire. They knew how to be cool and dress the part.

“I went by his house, he had a bunch of little funny looking suits. . . and things hanging in his closet, funny looking shoes, and hats and all of that. I said, ‘What’s going on, man?’”

In 1968, Miles Davis met singer and songwriter Betty Mabry, better known as Betty Davis. Her break onto the music scene signaled a new era for Miles, and their blooming relationship led Davis down a path of self-transformation and discovery. Miles said of Mabry:

“She was full of new things and surprises and helped point the way I was to go. . . Betty was a big influence on my personal life as well as my musical life. She also helped me change the way I was dressing.”

Embed from Getty Images
Gone were the days of fitted suits and modest color schemes. By the turn of the decade, Davis had adopted a new style that was in-tune with the newest generation of musicians and rockers. Keeping with the times, and maybe even surpassing them, leather bell bottoms, patchwork pants, frayed vests, and metallic blazers became pieces in Miles iconic new wardrobe.

Speaking of Prince in his 1990 autobiography, Davis proclaimed a kindling adoration for the up-and-coming star:

By the 1980s, Miles’ style had evolved once again, symbolizing his interest in the young and new sounds that were emerging and taking hold all around him. His hip and funky style of the 70s shifted towards shoulder pads and crotch-drop pants, all the while retaining that famous Davis flare and rebelliousness.
Embed from Getty Images

This shift in style was epitomized in his love and adoration for Prince:

“His s— was the most exciting music I was hearing in 1982,” Davis exclaimed. “Here was someone who was doing something different, so I decided to keep an eye on him.”

While the pair never released any official music together, their on-stage debut performing “Auld Lang Syne” together at Paisley Park on New Year’s Eve 1987 is a treasured artifact that Davis and Prince fans alike share.

There may be no bolder accessory than a sports car. Over the years, Davis owned five Ferraris, including his all-time favorite: a startling red 275 GTB/4.
Embed from Getty Images

Lenny White describes how the cars tied in with his persona, which translated into a lifestyle:

“Miles Davis wore all the slick clothes, and drove fast cars… we didn’t wanna’ play with Miles Davis, we wanted to be Miles Davis.”

When given an advance for a concert at Avery Fish Hall, Davis spent his money on a “brand new” canary-yellow 308 GTSI Ferrari sports coupe, with a targa top” to arrive in. As musician Marcus Miller jokes:

“He bought that car just to show up at that gig. And yeah man, I bought a new shirt – he bought a Ferrari.”

In musicologist Tammy Kernodle’s words, Davis devised a style that was “uniquely, organically him.” Sure enough, as he reinvented himself and his music again and again through his life, so did his sense of style.

Miles Davis: Birth of The Cool, a film by Stanley Nelson, is streaming now on our website and on the PBS app. 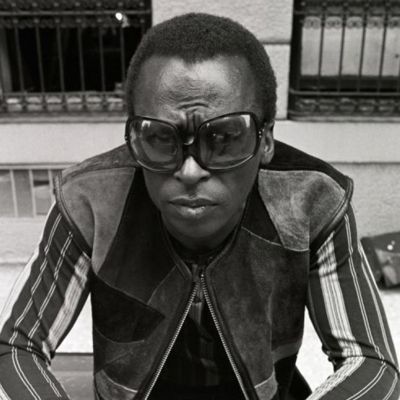 John Hammond: From Bessie Smith to Bruce Springsteen
Quincy Jones: In the Pocket
George Gershwin: George Gershwin Remembered
John Cage: I have Nothing to Say and I'm Saying It
The Highwaymen: Friends Till The End - Full Film
Woody Guthrie: Ain't Got No Home