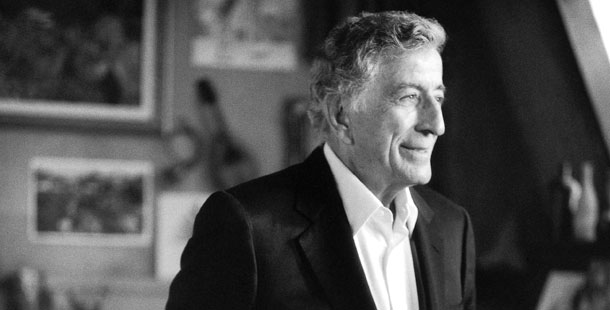 You may know the singer Tony Bennett as one of America’s last great crooners who has touched generations of fans with such romantic ballads as “I Left My Heart In San Francisco” and “I’ll Be Seeing You.” But before he was a lover, he was a fighter, who spent time serving in World War II. The horrors that Bennett witnessed on the battlefield led this living legend towards a life of pacifism and a commitment to art, music and social justice from which he’s never turned back.

Born on August 3, 1926, Anthony Dominick Benedetto was raised in Astoria, Queens, where his first introduction to music was through the radio, listening to musicians like Louis Armstrong, Bing Crosby and James Durante. His first professional musical gig came as a teen when he waited tables as a singing waiter in restaurants, but in November 1944, just three months after turning 18, his entire world changed when he was called to serve with the US military in WWII.

“I went down to the induction center and stood in line with a bunch of other eighteen-year-olds, wondering what was going to happen to me,” Bennett wrote in his autobiography, “The Good Life.” “When my name was called, I went up to the desk, and the induction officer asked me if I preferred the Army or the Navy. I said, ‘Navy,’ and the guy stamped, ‘Army’. I thought, ‘Oh, boy, so that’s the way it’s going to be.’ Little did I know what I was in for.”

Bennett completed his basic training at Fort Dix, New Jersey, and then Fort Robinson, Nebraska where he said that officers “treated us like animals” to “break our spirit.”

“The biggest shock was the level of bigotry I encountered as soon as I arrived,” he said. “Unfortunately that never changed much while I was in the Army, but I certainly wasn’t prepared for it to begin in boot camp. Our sergeant was an old-fashioned southern bigot, and he had it in for me right from the start because I was an Italian from New York City. I wasn’t the only one who experienced prejudice — it was just as bad for other ethnic groups, especially the Blacks and Jews.”

After just six weeks of training, Bennett was assigned to the 63rd Infantry Division and sent to Europe to bolster Allied troop numbers that had suffered severe losses. Half of the replacement troops fell in the first three days. For the next few months, Bennett said he got a personal “front-row seat in hell” as he and his division marched through France and Germany on the front lines — all while under heavy fire and in freezing cold conditions. Friends were dying in front of his eyes, he said, and the only safety zones were the “fox holes” the soldiers had to dig in the frozen ground to curl up to sleep in at night. Sometimes, they were so close to the Germans that they could hear them talking at night, in between being jolted awake by bombs. Luckily, by April 1945, the war was already coming to an end, and one of Bennett’s last official missions was to help liberate Kaufering concentration camp in the town of Landsberg, Germany.

A month later in May, after the Germans officially surrendered, Bennett was ordered to stay on and serve in the postwar occupation. One day, while Bennett was singing in the shower, a passing officer noted that he had a great voice and encouraged him to join the band the 255th Regiment was forming. That’s how Bennett managed to get assigned to Special Services, which was responsible for entertaining the occupying troops and keeping their minds off fraternizing with German women. During his time in Special Services, Bennett rose to the rank of corporal, but not for long.

It was on Thanksgiving in 1945 that Bennett was famously demoted. His transgression? Inviting a Black friend, Frank Smith, to dine with him at a time when soldiers were still officially segregated. Bennett said a bigoted officer, determined to pull rank on him, cut off Bennett’s corporal stripes with a razor and then spat on them before flinging them to the floor. He was promptly demoted to private, and reassigned to a unit that exhumed mass graves and prepared the bodies of soldiers for shipment back to home.

“This was another unbelievable example of the degree of prejudice that was so widespread in the army during World War II,” Bennett said. “Black Americans have fought in all of America’s wars, yet they have seldom been given credit for their contribution, and segregation and discrimination in civilian life and in the armed forces has been a sad fact of life.”

“It was actually more acceptable to fraternize with the German troops than it was to be friendly with a fellow Black American soldier,” he recalled.

Experiences like this led Bennett to later join Dr. Martin Luther King during the 1965 civil rights march in Alabama. And throughout his long career, Bennett treated his fellow musicians — no matter the color of their skin — with respect and dignity. This included acts such as giving top billing to Black artists like Duke Ellington and Count Basie out of respect.

Luckily, Bennett got a break from “graves registration” after a major heard about the situation and pulled some strings to reassign him. He went on to join The 314th Army Special Services Band and sang under the stage name “Joe Bari.” While listening to the Armed Forces Radio Service broadcasts, Bennett became acquainted with the new sounds of jazz coming out of the States, which included artists like Nat King Cole.

“Postwar Germany was a hell of a place to discover an American institution like Nat,” he wrote. “I sang a lot of numbers in Germany that I did later on in my career, like ‘Body and Soul’ and ‘On the Sunny Side of the Street’.”

When Bennett returned to America in August, 1946, he committed his life to being a pacifist.

“The main thing I got out of my military experience was the realization that I am completely opposed to war,” he wrote. “Every war is insane, no matter where it is or what it’s about. Fighting is the lowest form of human behavior. It’s amazing to me that with all the great teachers of literature and art, and all the contributions that have been made on this very precious planet, we still haven’t evolved a more humane approach to the way we work out our conflicts. Although I understand the reasons why this war was fought, it was a terrifying, demoralizing experience for me. I saw things no human being should ever have to see.”

After his successes singing with the band in Germany, Bennett was “determined to do whatever I had to do to become a professional singer.” He went on to study voice, try out for many auditions for Broadway (to no avail), and eventually began singing in nightclubs. After many years of perseverance and hard work, Bennett signed with Columbia Records in 1950, and to date has recorded over 100 albums and earned 19 Grammys, including the Grammy Lifetime Achievement Award. Over a career that has spanned more than 70 years, Bennett maintained his commitment to speaking out for civil rights and social justice and promoting charitable causes.

Watch an extended interview with Tony Bennett in the American Masters Digital Archive. 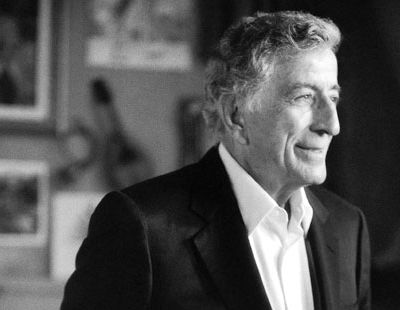