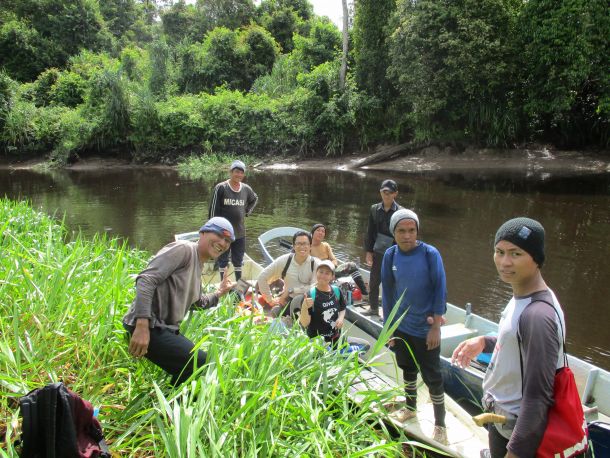 Joshua Pandong (third from left) and a team of WCS researchers and field guides traveling by boat before trekking in peat swamps to search for orangutan nests. Photo credit: ©WCS Malaysia

I have been working with the Wildlife Conservation Society (WCS) based in the Sarawak state of Malaysian Borneo since 2005. My journey in conserving orangutans began when I had my first chance encounter with two orangutans in the wild in 2006. I remember building a sense of awe and deep respect for them as they broke arm-sized branches with one mighty pull after another, in a territorial display.

Another rare sight in the wild—two orangutan mothers, each with an infant clinging at the side–prompted my personal motivation to keep the majestic creatures thriving in their natural state. I then pursued my master’s degree at the University of Adelaide in Australia in 2015 and graduated in 2019. I returned to WCS and have since taken up my current role as the leader for the Orangutan Unit. This includes coordinating the various teams to find answers to three important questions. 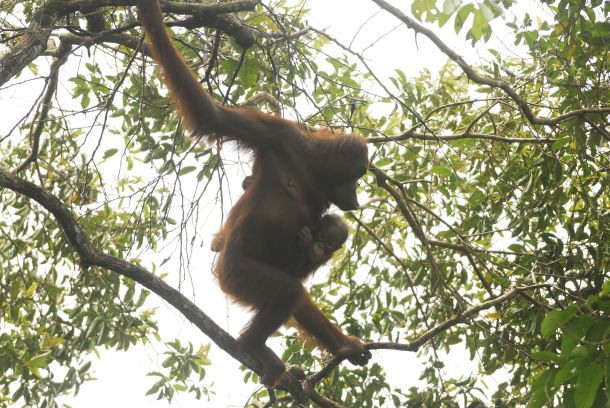 An orangutan mother and her infant seen during a nest count survey at Ulu Sungai Menyang, one of the non-protected sites in Sarawak. Photo credit: Daniel Kong/WCS

First, where are the orangutans in Sarawak today? Our team set out to estimate the orangutan population and map their distribution in various areas in Sarawak. We do this by selecting plots in a random manner and counting the number of new orangutan nests built there over a closed study period.

We chose to count the nests rather than orangutans themselves because nests are easier to spot than this elusive great ape. Orangutans are challenging to identify up in tree canopies. Although they have bright red fur, in the shade you will only see the dark skin underneath—making them well-camouflaged!

Using a statistical approach to generate population estimates, we projected there are approximately 2,000 orangutans in Sarawak out of roughly 100,000 left in the wild throughout Borneo. Generating population figures from the number of new nests seen was the easy part. The hard part now is protecting areas that could support orangutans even though no nests were found there (yes, “zero nests” is also important data!). This is crucial especially for orangutan habitats outside of protected areas.

In recent times, there have been plans to develop non-protected lands close to orangutan habitats as part of economic recovery initiatives in relation to coping with the Covid-19 pandemic. WCS Malaysia is in the Environmental Impact Assessment review panel and we use this platform to provide scientific recommendations on these matters in hopes of safeguarding areas of high conservation value for biodiversity and people. 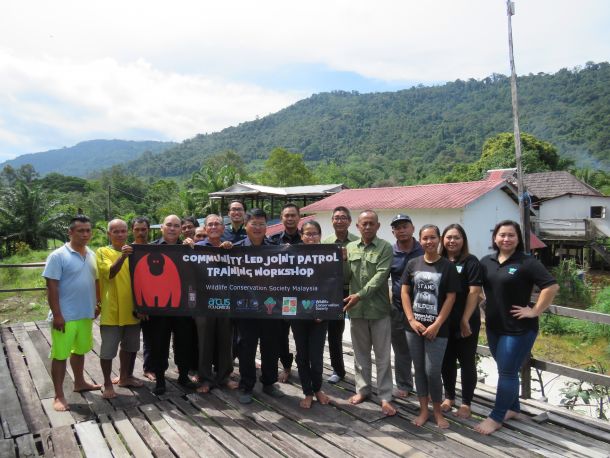 The second question we are focused on is what happens when a forest is lost. In Sarawak, we have identified and classified orangutan habitat into three categories: a) core habitats, where 90 percent of viable orangutan population is found, b) remnant sites, which consist of fragmented forests with low orangutan numbers, and c) historical ranges, where orangutans were found before but have not been seen in more than 20 years.

The field sites where we study orangutans are small when compared to the island of Borneo. But over the last century, we have seen more than 75 percent decline in orangutan habitats—most lost due to expansion of land development. This decline is likely to continue considering the present social and economic circumstances.

In 2018, our teams conducted social surveys to gauge the perception of indigenous communities toward wildlife and protected areas. More than 900 respondents from 72 villages were interviewed and, of these, only 36 percent felt that orangutans had some positive relevance to the community. Amongst other reasons, this response was likely due to having little to no direct encounter with wild orangutans.

On the other hand, more than 71 percent of the social survey respondents did perceive that bad consequences were likely to happen when there is forest loss.

The orangutans are among the forests’ more important gardeners due to their role in dispersing large seeds. As orangutans are displaced from their homes and moved towards nonsuitable habitats, fewer seeds are dispersed, meaning fewer fruit trees, and less food for animals—in turn rendering the forest unhealthy. Subsequent impacts on the health of villagers demonstrate how human health, environmental health, and wildlife health are all interdependent.

The third question we are asking is what we can do to save orangutans and their habitats. Our teams continue to engage indigenous and local communities living in and around orangutan habitats. We work with local communities in their efforts to manage, protect and defend orangutans and their habitats. We provide support and training so they can be eyes and ears on the ground, able to raise the alert to local authorities in case of illegal activities going on in their areas. 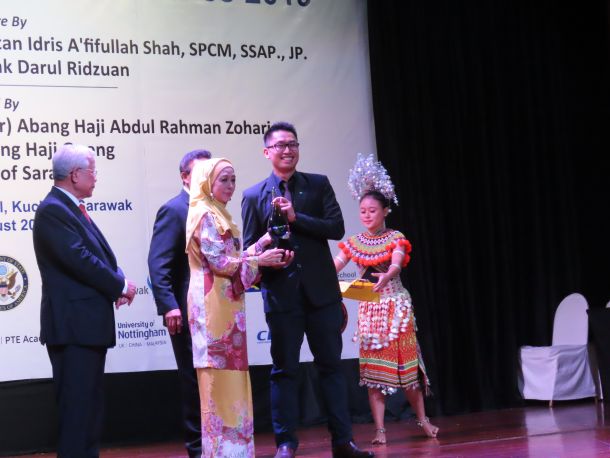 We also collect folklore stories on orangutans and the local Iban communities. This preserves the cultural heritage and renews a sense of appreciation and pride for the great apes among the younger generation. One legend has it that the Iban tribe almost became extinct due to pregnant mothers dying from being cut open during childbirth. The orangutans taught the Ibans how to give birth naturally and saved them! Today, the roles have reversed as we work to save orangutans from extinction.

My teammates and I are privileged to have gained a better understanding of wildlife and orangutans after years of research. We have also translated our collective experience into an award-winning English-Conservation Education program. But I also discovered that there is still so much more to learn about this critically endangered species.

I believe we must now learn all that we can to set an example for those who follow and pass the conservation torch to the next generation of biologists. They need our support to make a greater impact for orangutans in an increasingly challenging world, even beyond our lifetime.