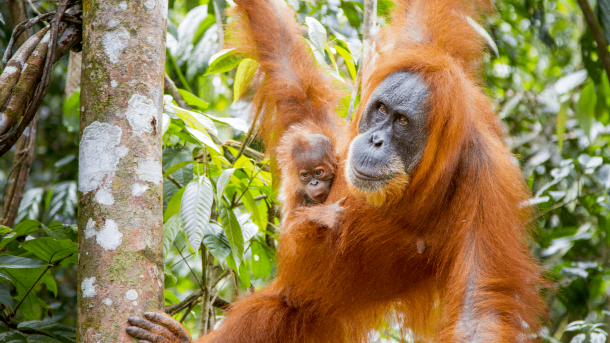 Sumatran orangutan (Pongo abelii) infants such as this one are highly dependent on their mothers, having the longest childhood of any wild primate. Credit: Paul Williams, ©BBC.

In Primates: Episode Two “Family Matters”, the filmmakers captured an extraordinarily rare sighting: a recently discovered great ape, the Tapanuli orangutan. The filmmakers were able to capture the first moving images of a mother and her infant Tapanuli Orangutan.

While the discovery of the new species was published a few months before they began filming the series, the filmmakers were, fortunately, able to locate and film the recently named species. To learn more about capturing this unique moment, NATURE spoke with Nikki Waldron, the director of this sequence:

Traveling to Sumatra to film these creatures was quite a challenge! We had an 8-hour hike to get into the forest from the nearest village. We used local guys to help carry our 30 bags of filming equipment, and we had to hike, slide and clamber the steep and slippery route to the research station. The jungle is very dense and hilly (we were at about 1000m – which is in itself unusual – orangs usually live in lowland swamps), and it was tough going. The research station where we stayed was incredible – 5 wooden huts built on stilts beside a bend in the river. The surrounding sounds of the forest were incredible – gibbons sang to us in the morning and cicadas screamed at dusk! The jungle was so dense that you could barely see the sky, and it rained hard every day! The researchers stationed in the forest were fantastically helpful and we joined them on their survey walks each day to try and find the orangutan. Each evening we would pour over maps and plan how we could maximize our chances of finding them.

The technique was to walk the trails in silence each day from first light, stopping every 20 minutes or so and listening for the sound of falling fruit or creaking branches. The orangutan are very hard to spot and blend into the canopy very easily. Several times I’m sure they were watching us long before we spotted them!

Our first encounter was with a very impressive large male that the researchers had names Gilang. He wasn’t keen on being disturbed and put on an impressive display which involved him throwing branches at us, making irritated kissing noises and even pushing a large dead tree down in our direction. We got a few shots before he gave us the slip. It was after this first encounter that our camera operator Lindsay realized just what a challenge the shoot was going to be! The low light levels in the forest, the heavy long lens, camera and tripod that he needed to use, and the uneven often spongy ground underfoot made things very tricky. And large as they are, orangutans seem to be able to move so effortlessly from tree to tree that they were almost always obscured by branches, and often 40m up! Lindsay spent hours every day setting up, moving, repositioning and dragging the camera around to desperately get some clean shots. The humidity fogged up his lenses and every time it rained we have to pack away too. We went for days at a time without even seeing any orangutans, coming home tired and disconsolate with sore necks from looking up all day!

We eventually got very lucky and came across a mother Beta and her young infant Bittang. The pair are well known to the researchers, and far more relaxed in our company than the big male. We were lucky enough to spend 12 consecutive days with them before they moved off into a part of the forest we couldn’t follow. Each day we had to keep up with them as they slowly moved around looking for food. They don’t jump, but lean and ‘polevault’ on branches to move from tree to tree. What might be a simple canopy transfer for them 30m up often meant scrambling down a bank and crossing a river for us down below them. At the end of the day, Beta would pull branches inwards, creating a makeshift nest for her and Bittang to sleep in. We would then mark the location of the nest with red tape and GPS, then walk back, exhausted, along the rugged paths back to camp by torchlight. We had to leave at 5 each morning in the dark to make it back to the nest before they woke up and moved off, or we could risk losing them. It was always a huge relief when we saw Beta’s shaggy form climb out of her nest at first light!

The pair were often very high in the trees. The baby, Bittang, was clearly interested in us and one day amused herself by throwing small twigs at us. She even managed to poo on the camera from a great height. Beta has such a beautiful face. I remember one day when I took my hat off and she just stopped chewing leaves and stared at me as I must have looked so different. It was certainly an experience that I shan’t forget! 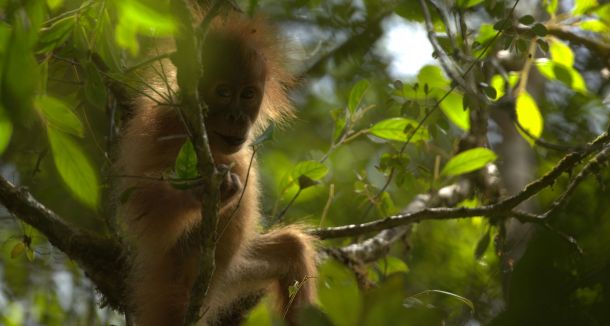 When the Tapanuli orangutan (Pongo tapanuliensis) was named as a new species in 2017, it became both the newest and the most endangered great ape on Earth. This orangutan infant is one of only 800 thought to exist. Credit: Lindsay McCrae, ©BBC

When the Tapanuli orangutan was named in 2017, it became the newest, and in the same moment, most endangered great ape on Earth. To learn more about discovering and studying a new species, NATURE also spoke with Dr. Serge Wich, Professor at Liverpool John Moores University. Dr. Wich is a member of the team that described the new species of Tapanuli orangutan.

Can you give a little bit of background on the 2017 discovery? Were those who made the discovery actively searching for a new species or was it a lucky chance?

In a nutshell, in the nineties, Erik Meijaard did a survey to determine if orangutans still occurred south of Lake Toba. He established that they did occur in the Batang Toru area. But at the time they were considered Sumatran orangutans. I started to do more survey work in the area in 2000 and we established that they occurred in the region in various places. In 2004 behavioral research started in the area (because it was considered the most southern population of the Sumatran orangutan) led by Gabriella Fredriksson and samples were collected for genetic analyses.

From those, the idea started that they might be a different species. But morphological data were also needed and those came from a killed individual. So at the start, we certainly did not suspect it would be a new species but thought it would be a population of Sumatran orangutans that might be a bit different in their genetics and behavior. But once we started to obtain more data they turned out to be sufficient to describe them as a new species.

To learn more about the discovery, check out these articles on Mongabay: “What does it take to discover a new great ape species?” and “New Species of orangutan threatened from moment of its discovery“.

What does one do after discovering a new species? What’s the process? How do you evaluate things like its characteristics, current population size and threat level?

After the species was described we needed to do an assessment of its status. There was already survey data available from the area when it was surveyed thinking it was a Sumatran orangutan population. From that we could determine how many Tapanuli orangutans there were in the area and that led to its current IUCN red listing as critically endangered.

How many primate species do you think are still left to be discovered? What research is still being conducted?

A new species of primate has been discovered in the remote forests of Myanmar, BBC reports on Tuesday, Nov. 10, 2020. The Popa langur, named after its home on Mount Popa, is critically endangered with a population size of about 200 individuals.