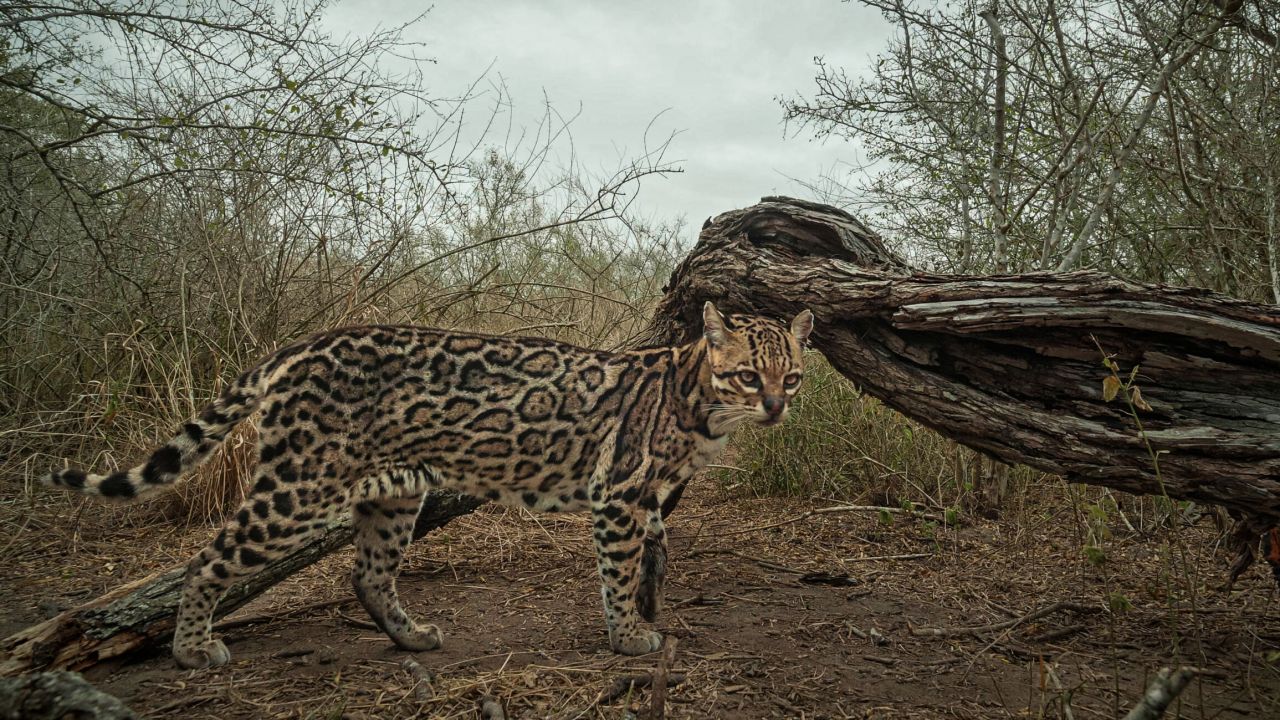 Ocelots are similar in size to bobcats. Female ocelots weigh 14.5 to 25 pounds, while male ocelots are heavier, weighing 15 to 34 pounds. Ocelots are typically 29 to 39 inches in length, with males slightly longer than females. Their tails are 10 to 16 inches long.

Ocelots are members of the cat family. They are medium-sized cats with beautiful fur coats that resemble that of a jaguar or leopard. Their coats are covered with a pattern of rosettes, stripes and spots. Over most of their body, their fur is golden with black or dark brown doughnut-shaped spots that are tan in the middle. Their belly is typically cream or white.

Like other small cat species, they have strong vision and hearing. They are well-adapted for their nocturnal behavior, as their eyes have a layer that reflects light, giving them excellent night vision. Their ears are round and marked with a bright white spot. Their sense of smell is much better than humans but it is not as keen as a dog’s sense of smell. They have long whiskers, which help them feel their way around. 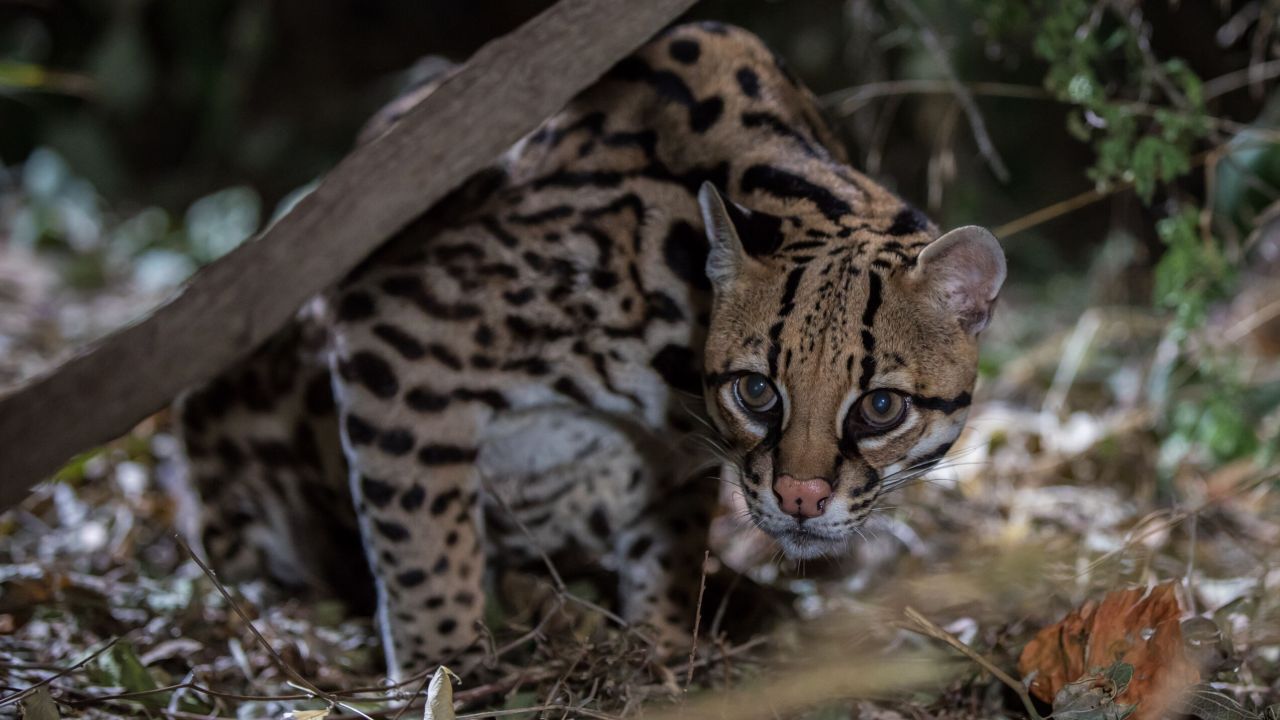 Ocelots mainly consume small rodents. Though their diet also includes birds, snakes, lizards, baby peccaries, young deer, rabbits, and even fish and crabs. They are nocturnal and typically hunt at night. Ocelots both actively look for prey while on the move or wait for prey to appear. While ocelots spend most of their time on the ground, they are strong swimmers and climbers.

Ocelots prefer to live in areas with dense forest cover and water sources. Some of their habitats include tropical forests, mangrove swamps and savannas. These cats prefer habitats with good availability of prey and water.

Ocelots can be found from southern Texas to northern Argentina in South America. 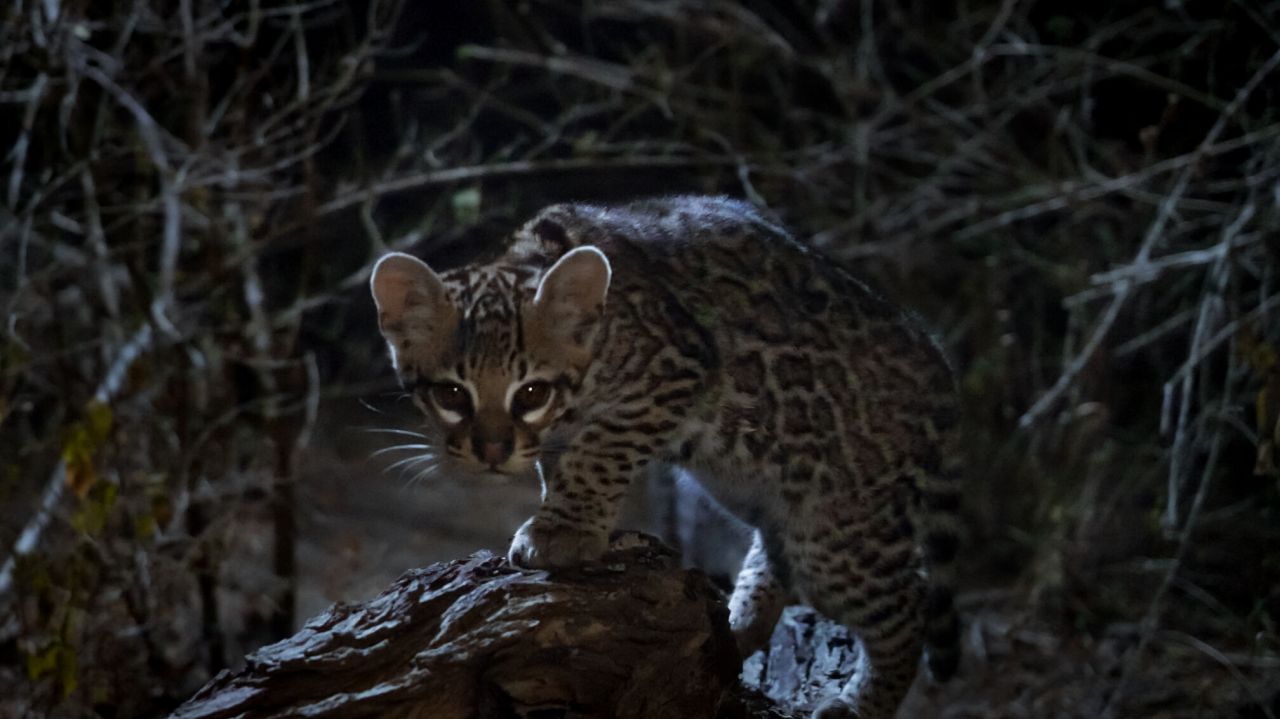 Ocelots can mate at any time during the year, with the peak mating season varying geographically. Estrus lasts four to five days and recurs every 25 days in a non-pregnant female. After breeding, the male and female ocelots go their separate ways. Following a gestation period of two to three months, the female will give birth to a litter of one to four kittens in a den. Their dens include a hollow tree, rocky bluff, cave or secluded thicket. The mother raises the kittens by herself, protecting them, feeding them, and moving them from den to den for protection.

At birth, ocelot kittens are fully marked with spots but their coat is gray, their lower limbs are dark and their eyes are blue, changing to brown at around three months of age. Their eyes remain closed from birth until they are about 14 days old. At three weeks old, the youngsters begin to walk. By the time the kittens are four to six weeks old, the mother ocelot teaches them how to hunt. The kitten’s adult teeth are in and it is able to eat solid food at eight weeks, although it may continue to nurse for six months. A kitten may stay in the mother’s home range for up to two years.

The ocelot is typically solitary and active mainly at night. A male ocelot keeps a territory that overlaps four or five females’ territories, so he can easily find a mate. Males are territorial and are not friendly toward their male next-door neighbors. A male will mark territory by clawing logs, spraying vegetation with his urine, and leaving feces prominently on trails. Like other cat species, ocelots communicate with each other using body language, scent marking, and vocalizations.

In captivity, ocelots can live for up to 20 years.

Habitat loss is the greatest threat to ocelots. As human activity expands, their habitat is being destroyed. Roads built through their ranges leave them vulnerable to being hit by cars. Hunting is another threat to ocelots. Humans have hunted ocelots for their fur, which can be made into expensive fur coats. However, in 1972, it became illegal to bring ocelots or their skins into the US and other countries. This law has helped decrease the number of ocelots hunted. 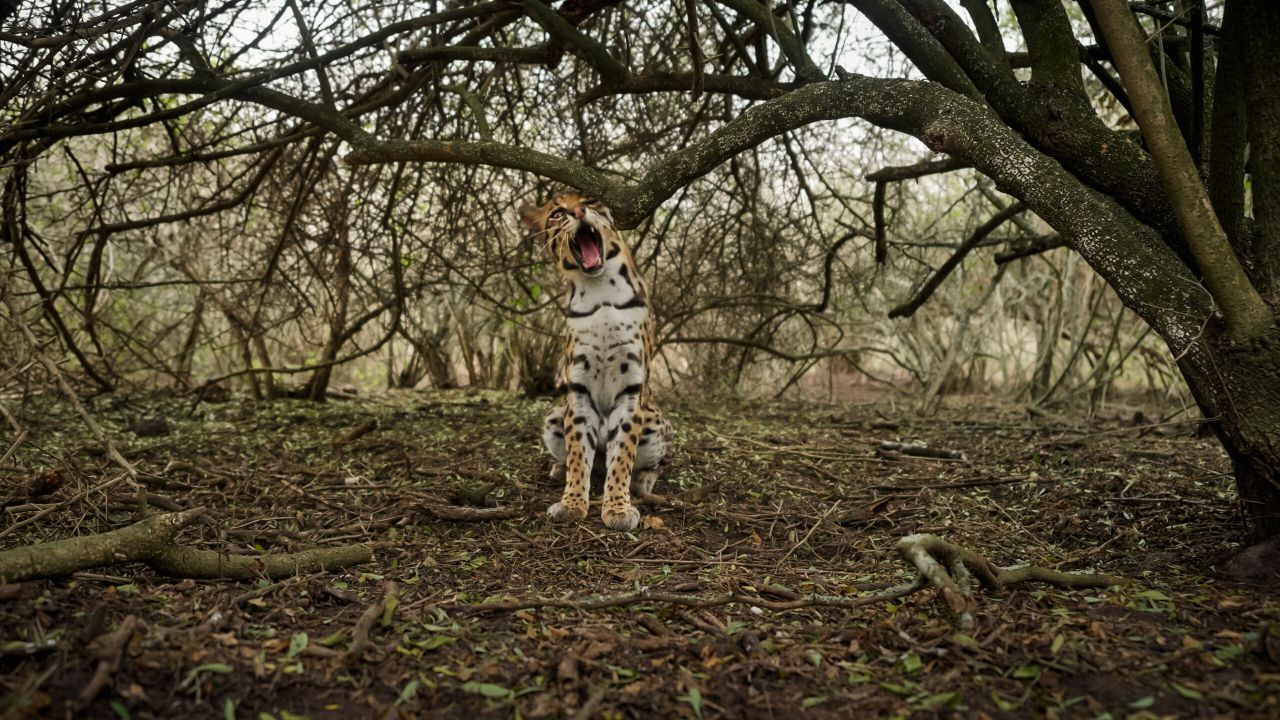 An ocelot caught in a candid moment by one of the film crew’s game cameras. Credit: © Fin and Fur Films Productions.

Ocelots were once found throughout Texas and east to Arkansas and Louisiana in the United States. However, due to hunting and habitat loss, there are fewer than 120 known ocelots living in the U.S. This ocelot subspecies, known as the Texas ocelot (Leopardus pardalis albescens), is endangered.

Outside of the U.S., the IUCN lists ocelots as “Least Concern” on the Red List of Threatened Species. Ocelots are the most numerous cats in the tropical Americas, but their populations are declining.

There is hope for a bright future. An ocelot population could be restored in Texas and beyond if ranchers, scientists, and government agencies work together on a solution.