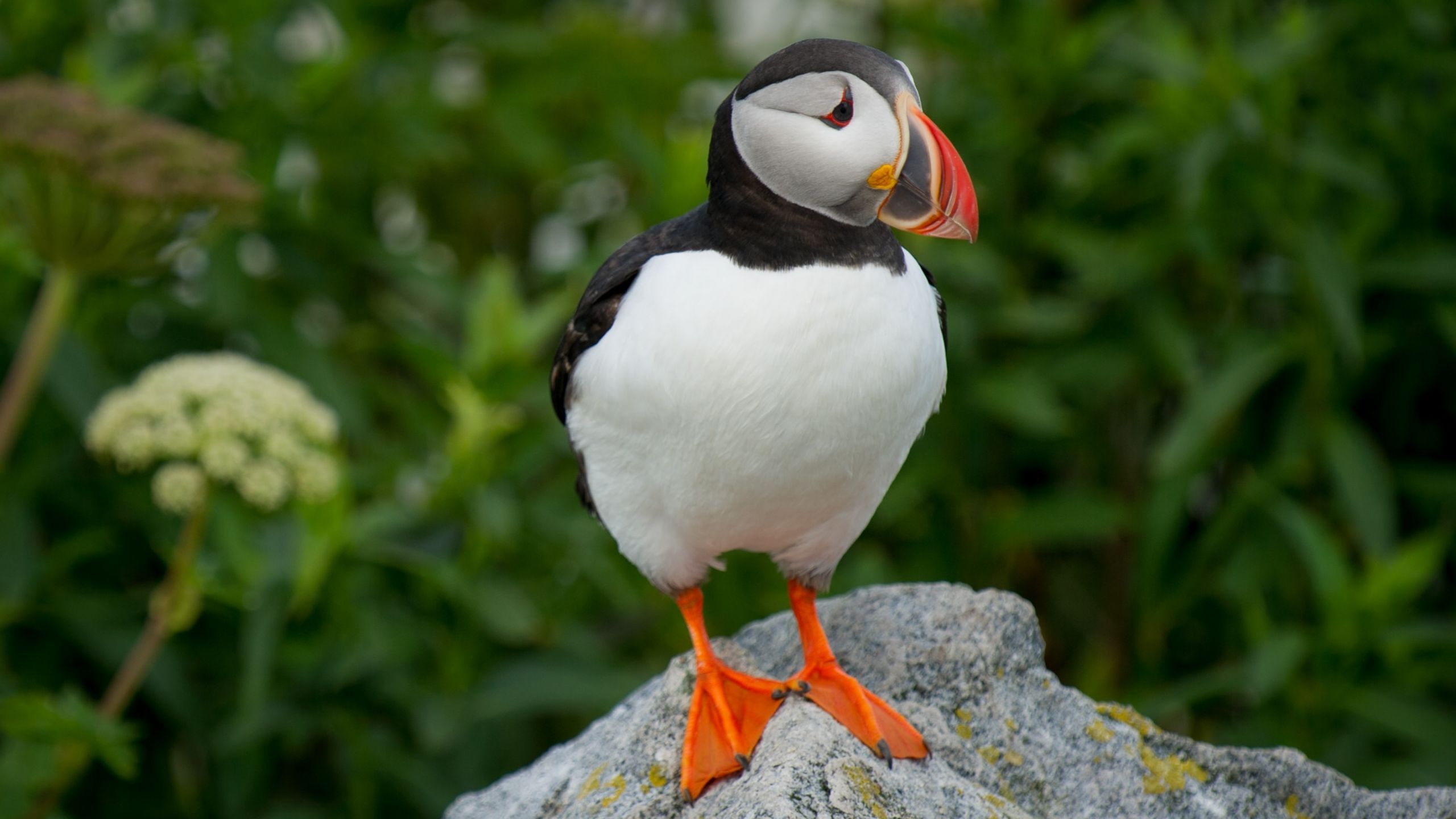 Puffins: small seabirds that belong in the genus Fratercula.

Puffins are small seabirds that vary slightly in size depending on the species. The tufted puffin is slightly larger than the other species, weighing 18.3 to 35.3 ounces and measuring 14.2 to 15.8 inches in length. The horned puffin is the second-largest species, weighing 17.0 to 22.9 ounces. Atlantic puffins weigh 10.9 to 19.4 ounces and measure 10.2 to 11.4 inches in length. 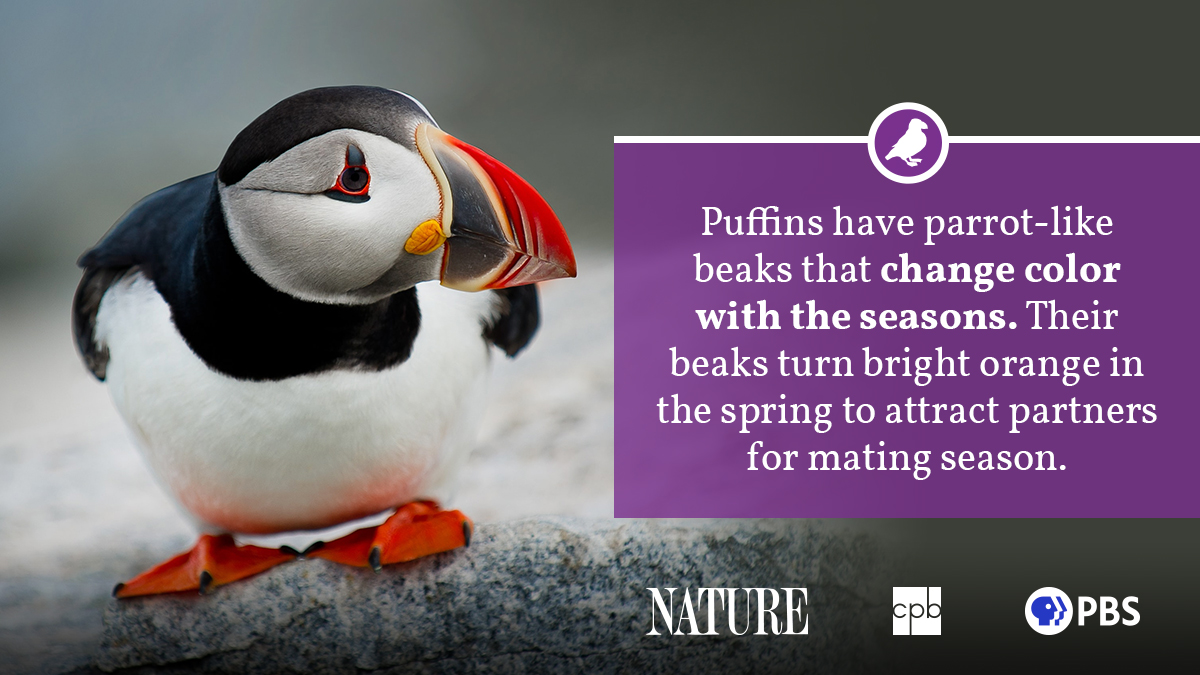 All three species of puffins are medium-sized, stout seabirds with short necks, big heads, and large triangular bills. They are typically black and white in color and are slightly distinguishable from one another. The Atlantic and horned puffins look similar, with the exception of a blue-grey triangle at the base of the Atlantic puffin’s beak and the dark, fleshy “horns” that extend above the eyes of horned puffins. Meanwhile, the tufted puffin varies most in its appearance. For all three species, their appearance shifts when breeding versus nonbreeding.

While breeding, horned puffins are black with a white face, belly and breast. They have orange feet and a yellow bill with a red-orange tip. Meanwhile, nonbreeding adults have sooty gray faces and have a smaller, grayish base. In comparison to adults, juveniles have smaller, all-gray bills.

Atlantic Puffins are black above and white below. Breeding birds have a gaudy black, orange, and yellow bill and their face are grayish-white. During the nonbreeding season, the face turns a darker gray, and the bill sheds its yellow highlights and shrinks slightly. Juveniles have all-dark bills. As the bird ages, the bill grows larger and acquires more grooves.

A tufted puffin is the largest species and most distinctive in appearance. A tufted puffin is all black except for a white face and long golden plumes curling over the back of its head and neck. Their bill is large and red-orange. Meanwhile, in the nonbreeding season, adults have dark gray faces with no head plumes or bill plates. 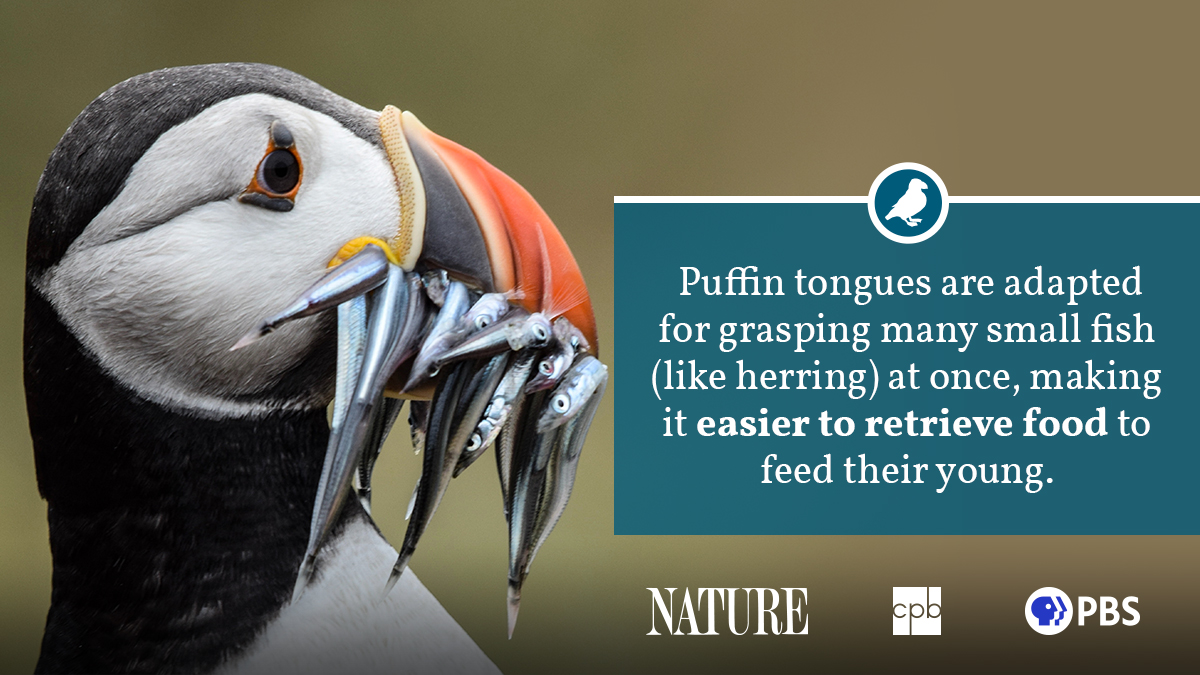 All three species of puffins feed on small fish. They are able to capture and carry multiple fish in their bill at a time. 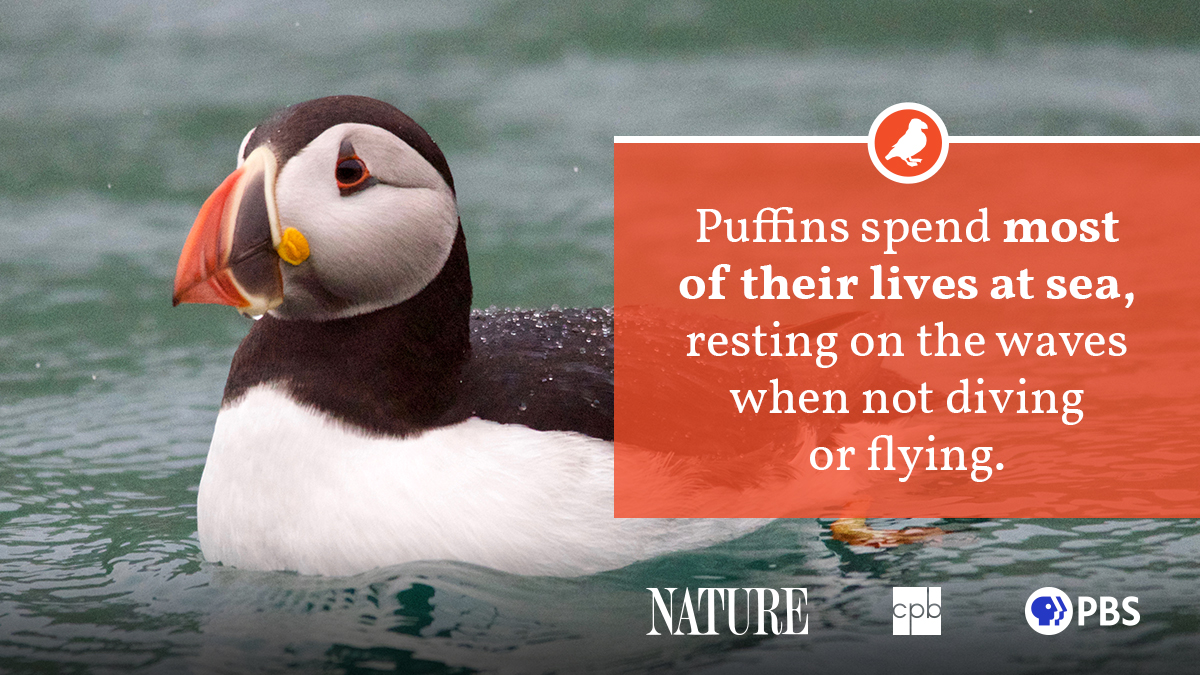 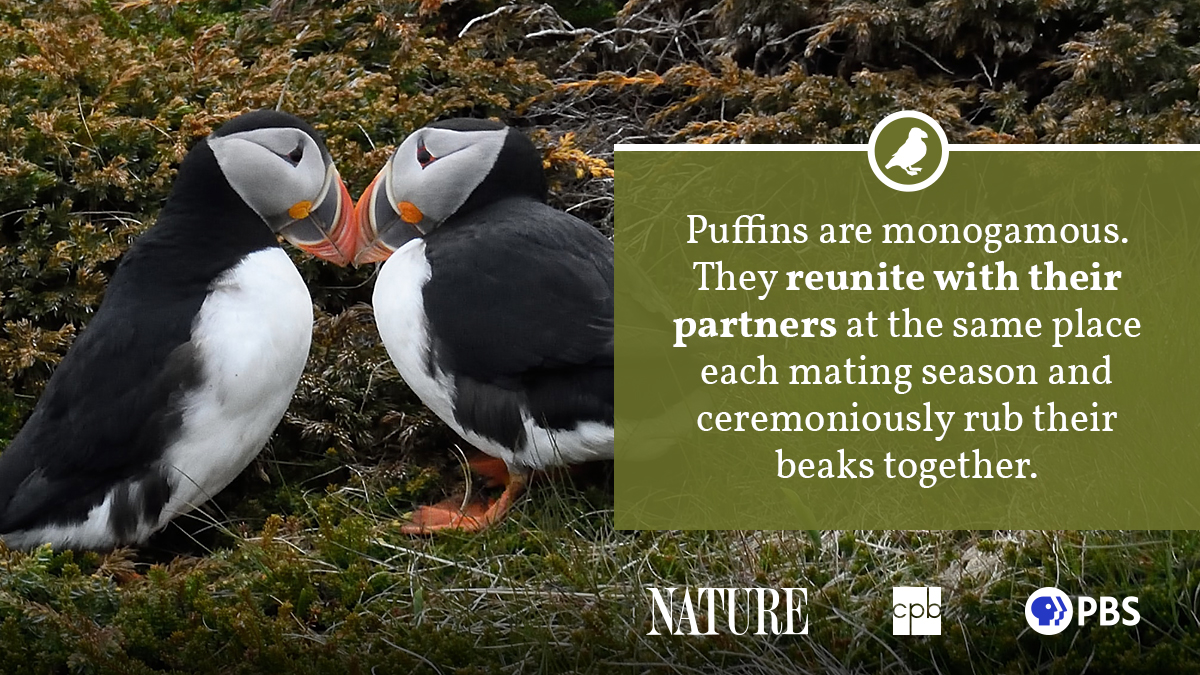 To attract a female, male Atlantic puffins flick their heads and grunt like a pig near a nesting burrow. Once paired, they maintain their bond by rubbing their bills together. Atlantic Puffins tend to form monogamous bonds and return to the same nest with the same mate year after year. Both the male and the female work together to dig a shallow hole or burrow into the ground with their bill and feet. They often make their nest under a boulder or within a crevice among the rocks and use grass and twigs to line the bottom of the burrow. The female lays one egg at a time with an incubation period of 36 to 45 days and a nestling period of 38 to 44 days.

Upon arriving at their breeding site, horned puffins begin their courtships. Their courtship displays include “billing,” where the male and female rub their bills together, jerking their heads and opening and closing their bills, giving a popping sound. This courtship display continues at the nest site and through the breeding season. Horned puffins build their nests are on cliffs or slopes of rocky islands. They are often lined with grass, algae, twigs, and feathers. The female will lay one at a time. The incubation period is 38 to 43 days and is by both sexes. Both parents also feed the nestling. The young departs from the nest at about 38 to 44 days. They are not able to fly well and often flutter or tumble down to the water and swim out to sea. From this point on, they are independent.

The tufted puffin nests mostly in deep burrows, which they dig into cliff edges and slopes. They can be more than 5 feet deep. The female lays one egg at a time. The incubation period is 40 to 42 days and is performed by both sexes. Both parents also feed the nestling once hatched, carrying fish in their bills and then dropping them on the ground of the nest or near the entrance. After 6 to 7 weeks after hatching, the young leaves its nest. 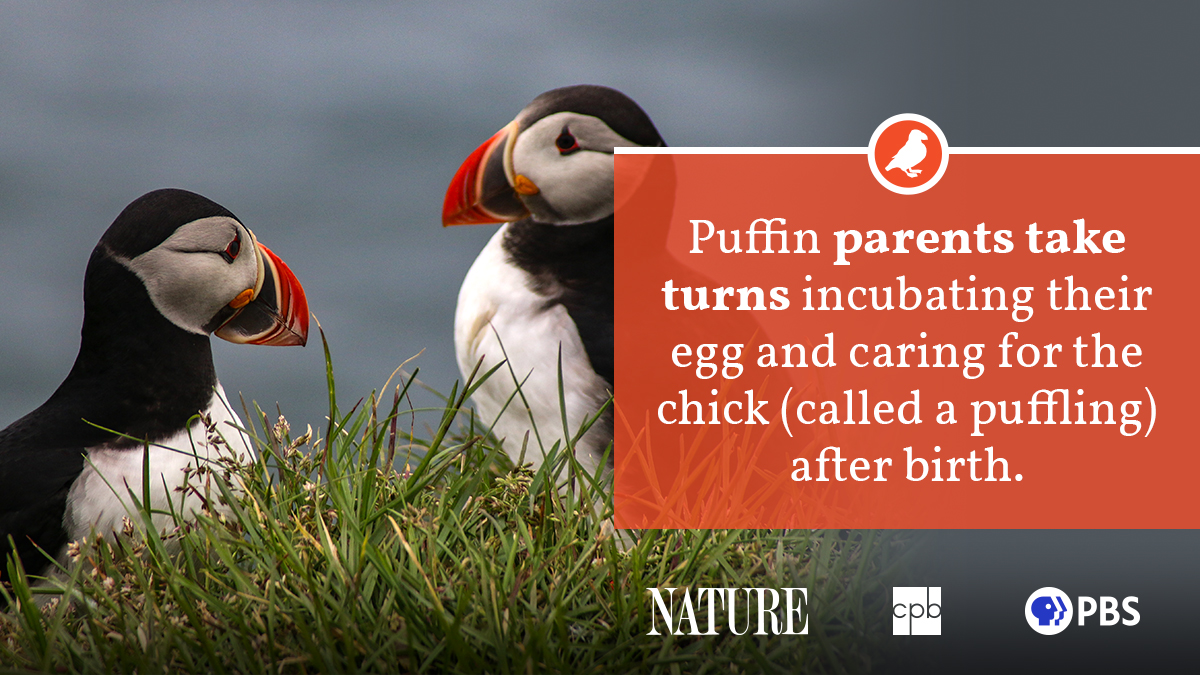 Puffins nest in large colonies on cliffs and islands over the sea. They forage for food relatively close to their nesting sites. When it is not the breeding season, adult puffins live mostly solitary lives at sea on the open ocean. While at the shore during the breeding season, puffins are social birds. They often forage in small groups and place their nesting burrows relatively close to each other.

Puffins often live about 20 years. The oldest known puffin lived to be 36 years. 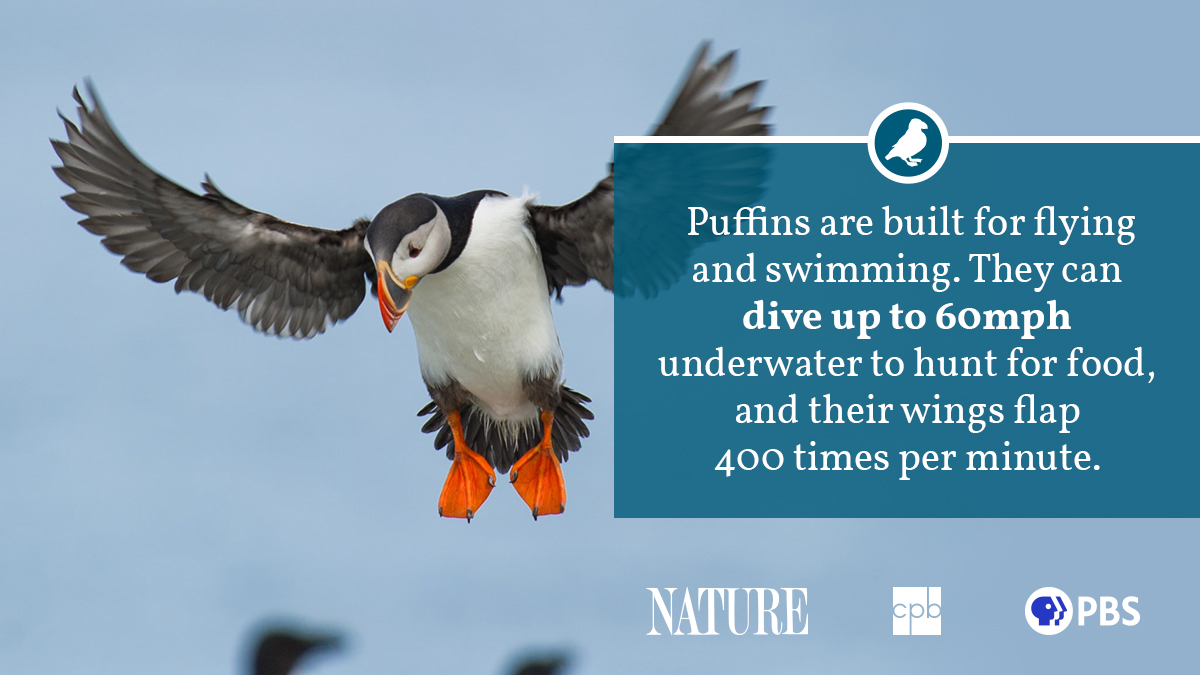 The largest threat to all three puffin species is climate change, which is warming ocean waters and affecting their food supply. Other threats include bycatch, plastic pollution, and natural predators like foxes, otters and bears.

Puffins have been hunted relatively sustainably for centuries in places like Iceland and the Faroe Islands. However, in North America in the 1800s and early 1900s, heavy exploitation for eggs, meat, and feathers caused populations of the Atlantic puffins to decline, and puffins disappeared entirely from the United States. There are now conservation efforts protecting the bird. 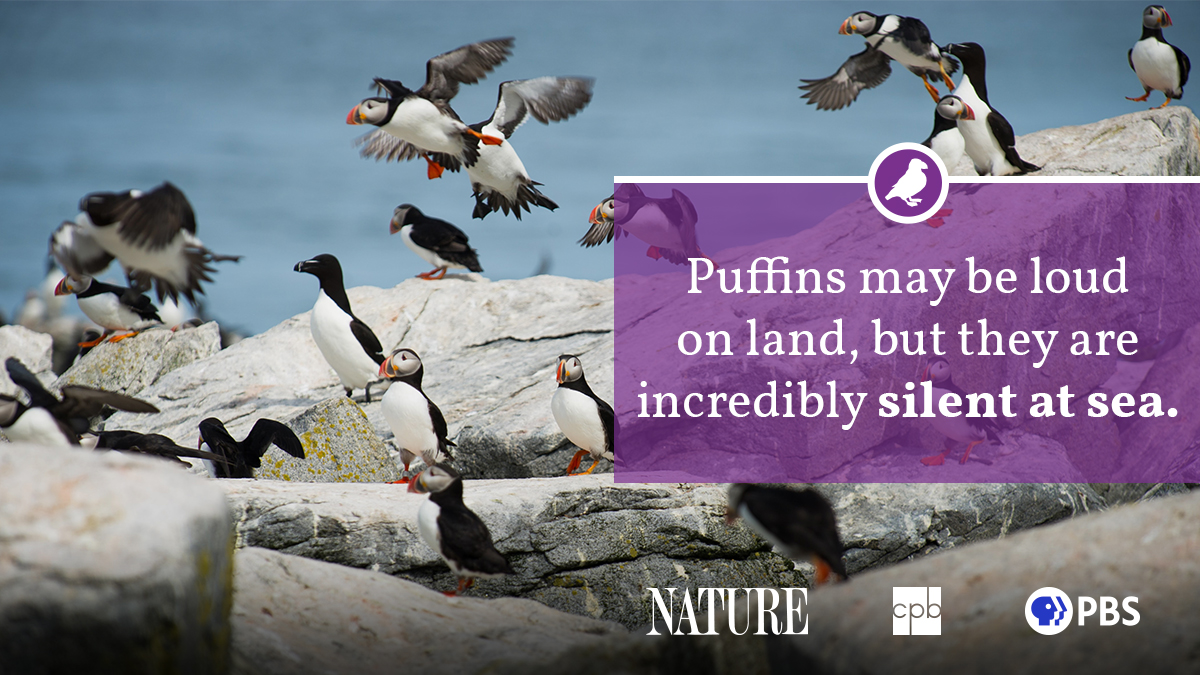 The tufted puffin and the horned puffin are listed as Least Concern on IUCN’s Red List. Meanwhile, the Atlantic puffin is listed as vulnerable.

Multiple conservation groups are working to protect puffins and their habitat. For example, the National Audubon Society started Project Puffin in 1973 in an effort to learn how to restore puffins to historic nesting islands in the Gulf of Maine. There are several active seabird restoration programs for puffins as well as many public education programs. The National Audubon Society created protected areas and worked to relocate young puffins to former nesting islands, allowing more than 2,000 puffins to breed again in Maine.

Sources: All About Birds from Cornell University and the National Audubon Society.