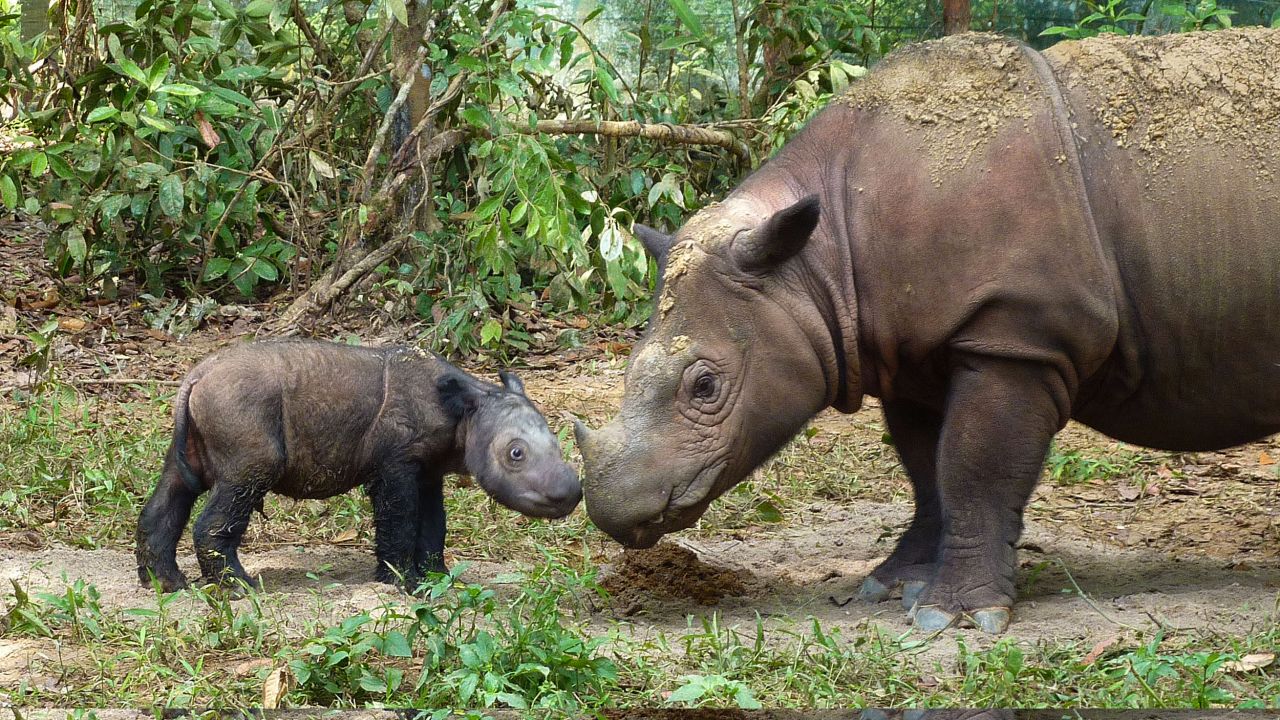 The Sumatran rhino is one of the most endangered large animals in the world; by some estimates there are only 30 of these magnificent creatures left. New research shows they have survived at low population levels for more than 10,000 years, making them even more vulnerable to extinction than experts previously thought.

A paper published in December in the journal Current Biology reveals that Sumatran rhinos (Dicerorhinus sumatrensis) reached a peak population of roughly 58,000 individuals about one million years ago. At this time, the rhino, which once ranged throughout southern China, eastern India and southeast Asia, expanded into what is now Sumatra, Borneo, and surrounding islands. This was made possible by a land bridge connecting the continent and the islands. The climate back then was colder than it is now, and much of the northern hemisphere was covered in ice; thus sea levels were hundreds of feet lower than today, says study lead author Herman Mays Jr., an evolutionary biologist at Marshall University in West Virginia.

Shortly after this peak, populations declined, and varied considerably in the coming millennia. But by 12,000 years ago, at the end of the Pleistocene epoch, the animals had reached low numbers from which they have never recovered. Mays explains that the effective population, which is basically the number of breeding individuals, has likely been less than 700 ever since.

This decline was driven in large part by rising sea levels, which wiped out much of the animal’s habitat and cut them off from mainland populations in southeast Asia, where they have since been declared extinct. They are now primarily found in parks within Sumatra.

Changes in climate also caused forest cover in this region to shrink over the course of the Pleistocene, much to the rhino’s detriment. Unlike their African counterparts, Sumatran rhinos prefer thick foliage rather than grasslands, and browse on leaves, bark and fruit. In addition to Sumatran rhinos, animals such as woolly mammoths, bears, and horses experienced periods of population decline during the end of the Pleistocene, which was a difficult time to be a large mammal, Mays says. Although some of this was due to human hunting, climate change had an negative impact on the habitat of many species.

Over the past century and a half, Sumatran rhinos have suffered even greater declines, putting them in serious danger of going extinct.  Human settlements have destroyed much of their habitat and they have been poached for their horns, which are believed by some to have medicinal value. Rhino horns are made of keratin, however—the same material in finger nails— and there’s no evidence they have any therapeutic properties. The animals’ recent slide “has been overwhelming,” says Lawrence Heaney, the curator of mammals at the Field Museum of Natural History, who wasn’t involved in the paper. “They’ve been hammered.”

To reconstruct the Sumatran rhino’s past population size, Mays and his team started by sequencing the genome of a beloved male rhino named Ipuh, who lived at the Cincinnati zoo from 1991 until his death, at age 33, in 2013. By analyzing the alleles—or gene variants—at specific spots within Ipuh’s genome, the researchers could calculate how many alleles there are likely to be in the Sumatran rhino population at large for any given trait. And this, in turn, tells them how big the population has been in the near past. The scientists also created “niche ecological models”, which examine climatic and environmental conditions that are favorable to rhinos in the past and present. This helps predict where they used to live and where they might be able to be reintroduced into the wild in the future, Heaney says.

As the Sumatran rhino’s situation has become more dire, several conservation organizations have proposed relocating wild rhinos into captive breeding programs as a last-ditch effort to save them. Such a plan is risky, of course, as captivity can be disruptive and breeding difficult. Furthermore, removing these charismatic animals from the wild, even temporarily, could hurt efforts to protect the habitat itself, Heaney says.

Mays confesses it’s “easy to get depressed” about the Sumatran rhino’s plight, but says that through collective action they can be saved. If nothing else, it’s important to spread the word. “People don’t protect what they don’t know about,” he says.