The deep sea has always held a certain haunting appeal—no light, crushing pressures, and frigid temperatures. Almost completely unknown until the late 18th century, people assumed nothing could survive down there. But explorers and researchers continue to find that this is far from the case; the deep sea, the world’s largest habitat, is home to a startling array of creatures. Here are five of the strangest.

On a recent expedition to the Mariana Trench, the deepest part of the sea, researchers from the University of Hawaiʻi at Mānoa and Britain’s Newcastle University dredged up dozens of strange-looking fish, from depths of over 26,000 feet (8,000 meters). The Mariana snailfish, as they’ve dubbed the species, has a translucent body reaching a length of over four inches, and looks somewhat like a overgrown tadpole. The Mariana snailfish feed on crustaceans, which are plentiful in the deep sea; many snailfish specimens brought back to the surface had a full stomach. They are the deepest-dwelling fish ever discovered.

This freaky-looking shark can live at  depths of up to a mile, and is referred to as a “living fossil” because of its primitive features. It has an eel-like snout with around 300 needle-shaped teeth arranged in parallel rows that help it catch squid and similar animals. The animal is only rarely encountered around the world; a five-foot specimen hauled up in November by researchers off the coast of Portugal made international headlines. They have the second-longest known gestation period amongst marine animals: up to three and a half years. (The record-holder is the deep-sea octopus, which broods its eggs for 4.5 years.)

Caption: The gulper eel deflates like a balloon when it’s out of water. Credit: Alexei Orlov

The gulper eel, also known as the pelican fish, has a strangely-gaping mouth that allows it to, er, gulp up prey such as crustaceans, fish and squid. It’s found throughout much of the world’s deep oceans at depths approaching five miles. It’s also relatively common. Sampling undertaken as part of the Census of Marine Life found that it is a “dominant component of the fish assemblage,” making up nearly five percent of the total biomass collected at depths between 2,400 and 7,500 feet. 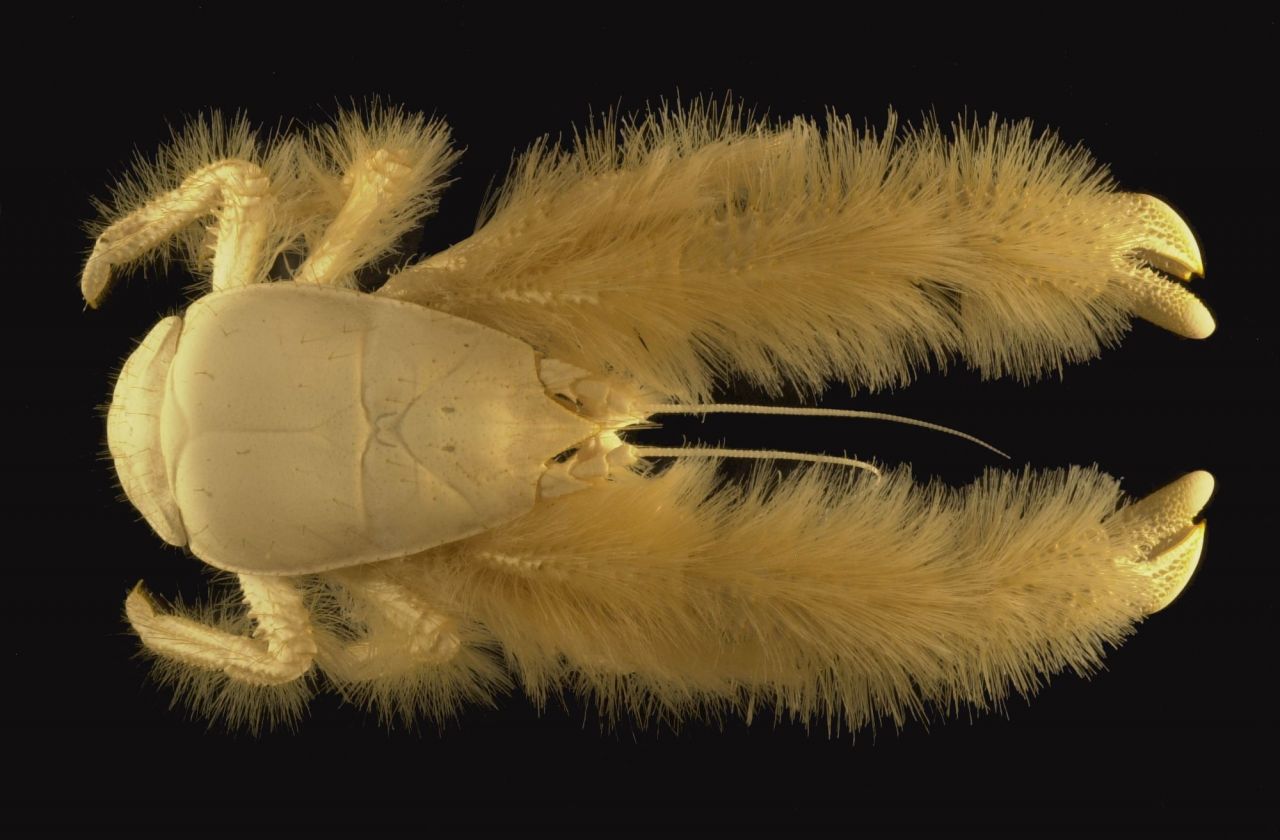 The yeti crab is named for the mythical yeti, a.k.a. the abominable snowman. Credit: Ifremer/A. Fifis

The yeti crab sports hairy arms and lives right next to boiling hot hydrothermal vents. These creatures were first observed by the research submarine Alvin south of Easter Island in 2005. Researchers soon realized they had discovered an entirely new genus of crustacean, Kiwa, named after the mythological Polynesian goddess of shellfish. The crabs are thought to use the hairs, or setae, that cover their body to “farm” filamentous bacteria. These microbes may be used for detoxifying minerals within the water, or for eating, though the animals have also been seen feeding on mussels. Yeti crabs can withstand the incredible heat of the vents and intense pressures encountered more than a mile under the sea surface. 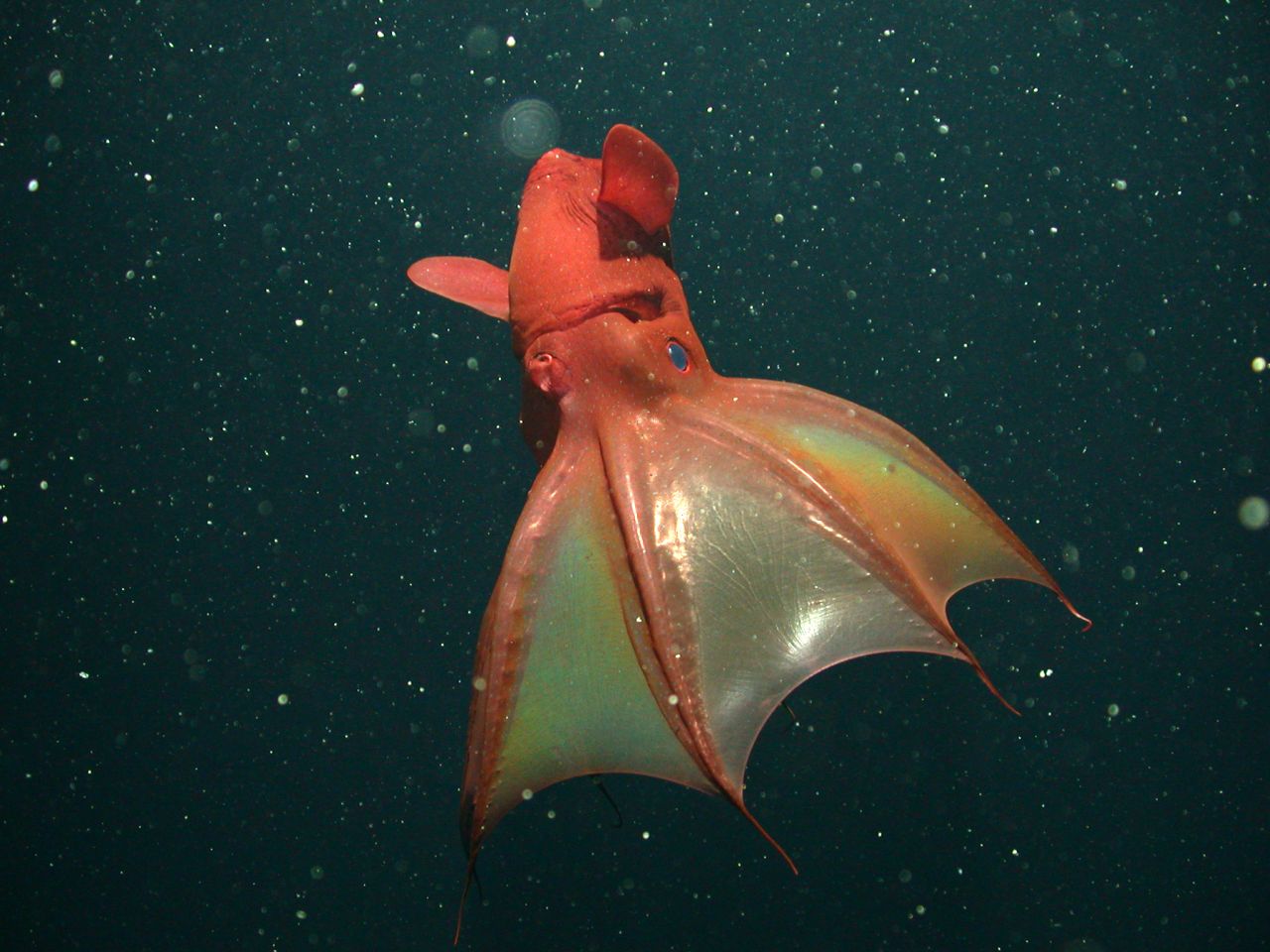 The vampire squid has some of the largest eyes relative to body size in the animal kingdom. Credit: MBARI

These creatures get their name from vampirish looks and webbed arms, which they can drape about the body like a cape. Despite their appearance and name, however, they don’t appear to behave in a fearsome manner; as researchers at the Monterey Bay Aquarium Research Institute discovered, they feed on bits of detritus called marine snow. They are found at depths to around 4,000 feet and do not ink; rather, when disturbed, they can emit bioluminescent sticky mucus that glows for up to 10 minutes. Should these denizens of the deep loom large, haunting your dreams tonight, fear not. They are only about the size and shape of a football.

Watch a vampire squid hovering near the ocean floor: