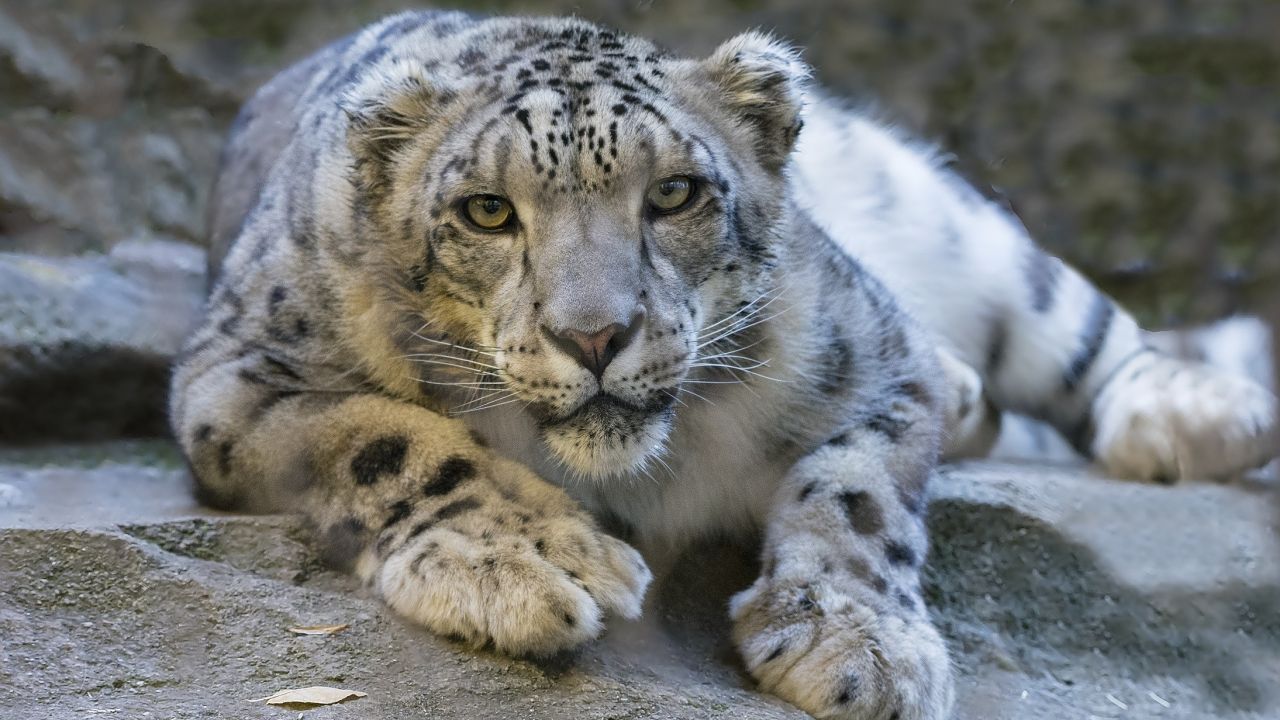 Snow Leopard (Panthera uncia): a big cat in the genus Panthera native to the mountain ranges of Central and South Asia. 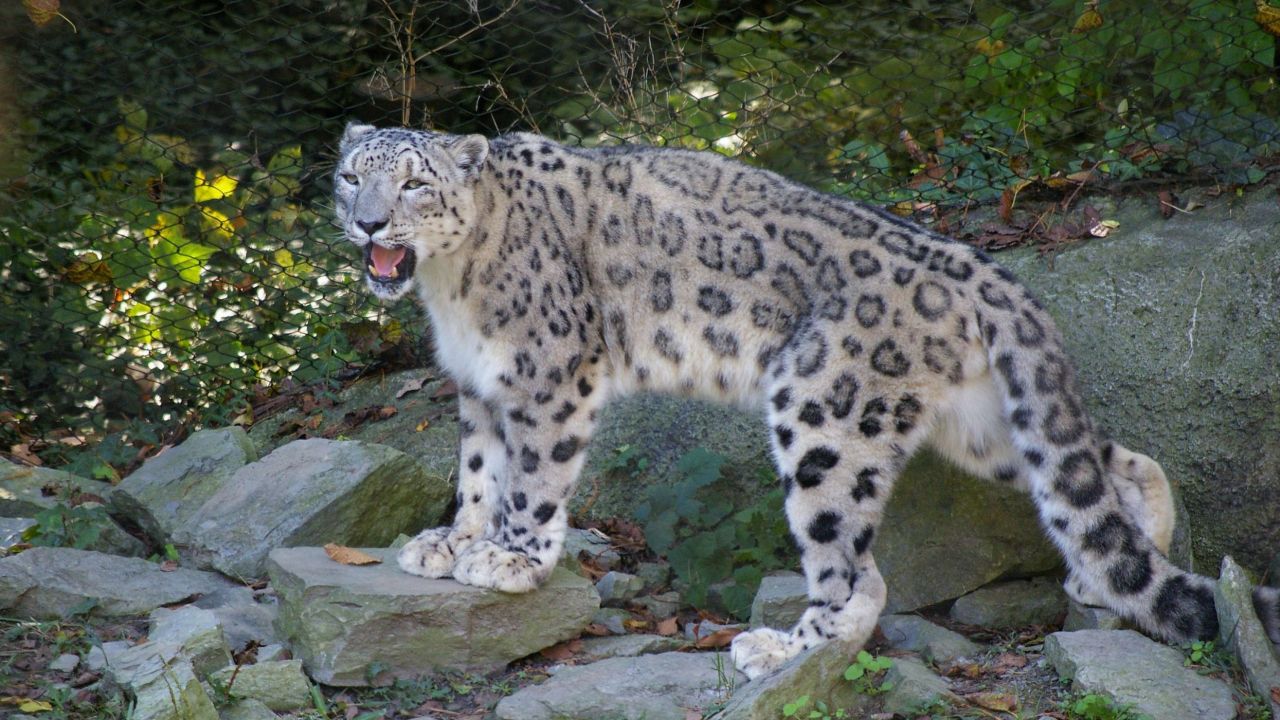 Snow leopards are 39 to 51 inches in length, with females being slightly smaller than males. They are about 24 inches at shoulder height. Their tail is about 31 to 39 inches long. Males weigh 99 to 121 pounds, while females weigh 77 to 88 pounds.

Snow leopards are medium-sized cats that are well adapted for life in the cold mountains. Their coat is pale gray or cream-colored with smoky gray or blurred black markings, allowing them to camouflage in their mountain habitat. The markings on their coat are arranged in distinct rows and get paler in the winter. Their fur is denser than cats found in warmer climates.

These cats have a relatively small head with a short, broad nose. Their nose has a large nasal cavity that passes cold air through and warms it. They have large paws with fur on the bottom to protect and cushion their feet on the rocky terrain and also provide great traction on the snow. Their short, well-developed front legs and chest muscles help with balance when climbing. Their long, thick tail also helps with balance. 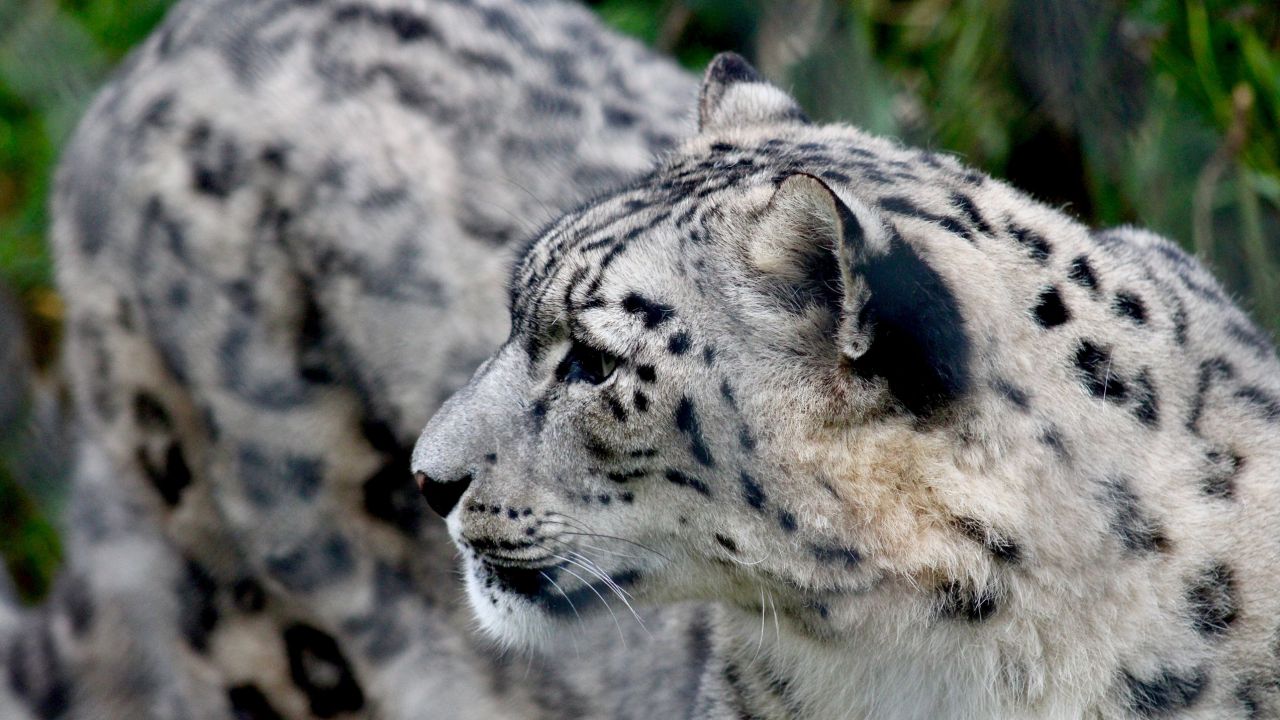 Snow leopards are carnivores and are capable of killing prey two to three times their own weight. Blue sheep and ibex are their main food, along with marmots, game birds, small rodents, and livestock. They’re most active at dawn and dusk.

They live high in the mountains of Central and South Asia.

Snow leopards are native to the mountain ranges of Central and South Asia. Its range extends across 12 countries in Asia: Afghanistan, Bhutan, China, India, Kazakhstan, Kyrgyz Republic, Mongolia, Nepal, Pakistan, Russia, Tajikistan, and Uzbekistan. About 60% of snow leopard habitat is found in China. However, more than 70% of its habitat remains unexplored. 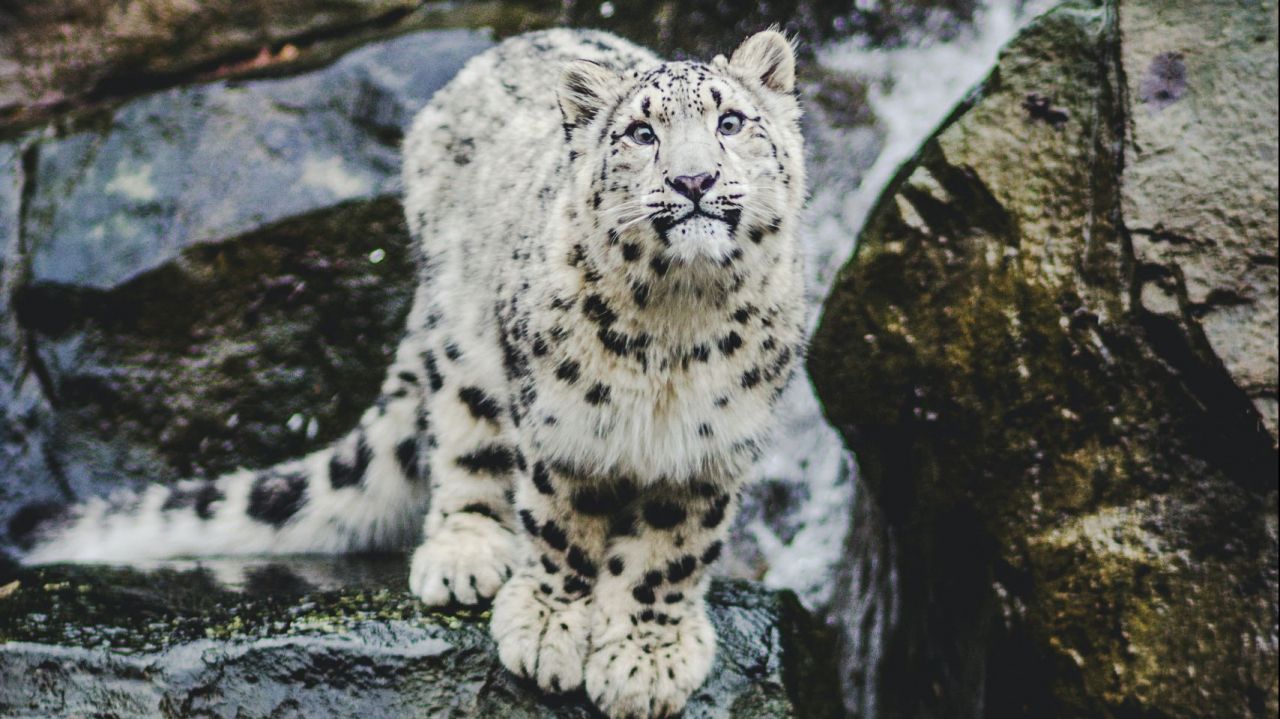 The snow leopard breeding season occurs between January and late March. During this time, snow leopards send vocal messages to find a mate. After breeding, the male leaves, while the female is responsible for finding a safe place to have and raise her cubs. After a gestation period of 98 to 104 days, typically in June or July, a female will have one to four cubs. At birth, the cubs weigh only 11 to 25 ounces and are much darker than their mother.

The cubs first open their eyes when they are about seven days old. By two months old, they can run and eat solid food. At three months of age, the youngsters are ready to learn how to hunt. They typically stay with their mother for the first 18 to 22 months of their lives and reach sexual maturity at 2 to 3 years of age.

Snow leopards are solitary and nomadic. They communicate through hissing, growling, moaning, and yowling. Their throat is similar to that of smaller cats so they do not roar. 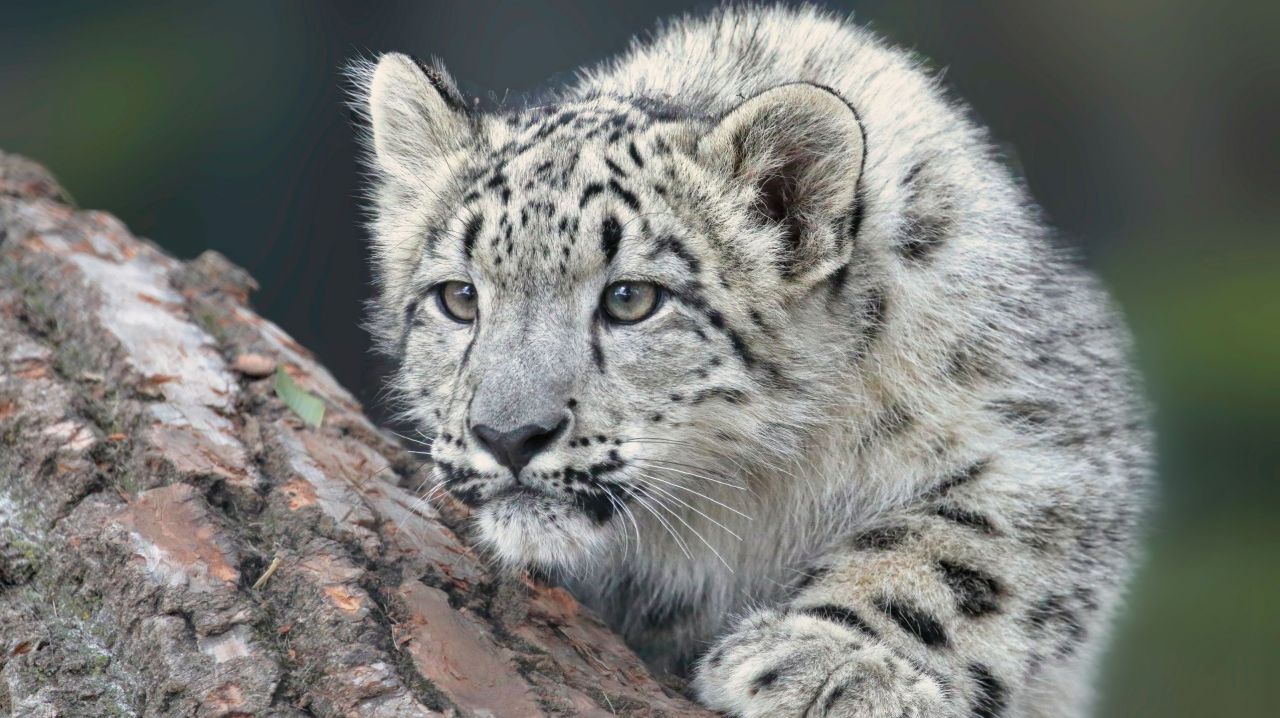 Humans are the largest threat to snow leopards. Hunting, habitat loss, declines in natural prey species, and retaliatory killings resulting from human-wildlife conflict are amongst the greatest threats to the species. Climate change also threatens the species, as rising global temperatures can severely impact alpine habitat productivity. In turn, this can impact prey and freshwater availability in the harsh mountainous environment. 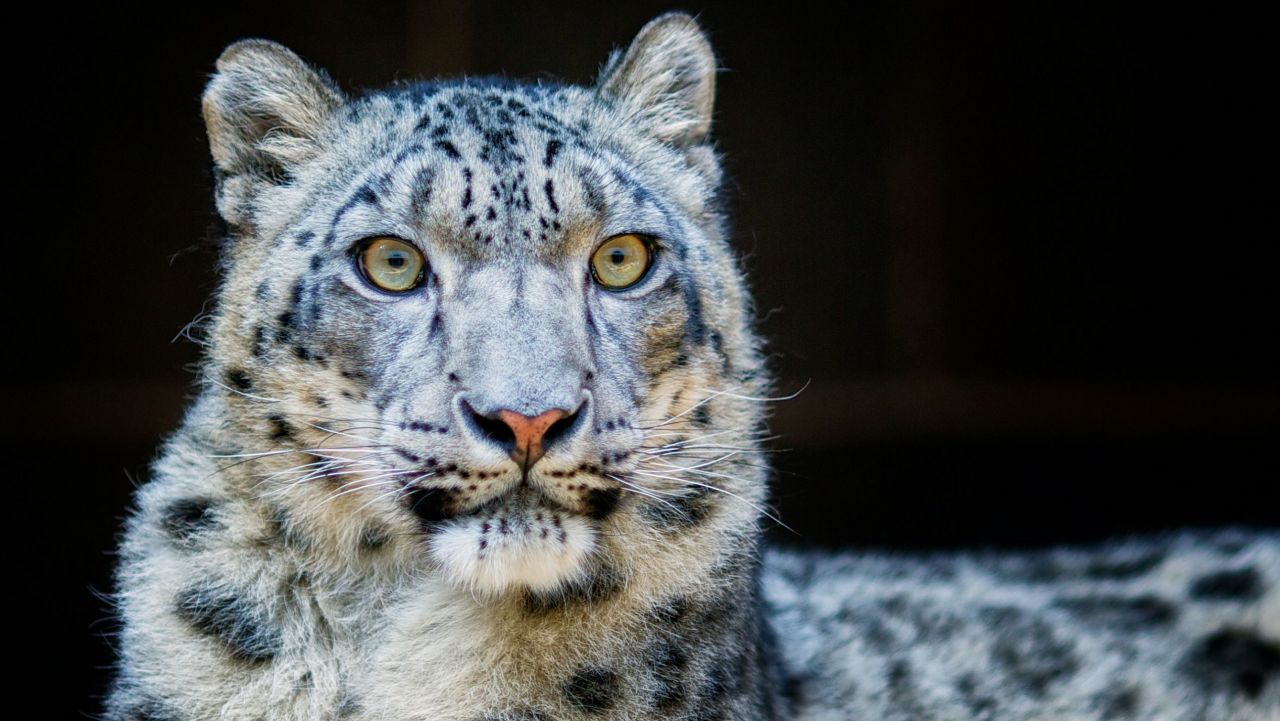 According to the IUCN’s Red List, snow leopards are classified as “Vulnerable.” Due to their elusive nature and remote habitat, their population size is unknown. However, it is estimated that 4,000 to 6,500 snow leopards live in the wild.

Multiple conservation groups are working to protect this vulnerable species. Among these organizations is the Snow Leopard Trust, based in Seattle. The Trust’s efforts are community-based conservation projects that are based on an improved scientific understanding of snow leopard behavior, needs, habitats, and threats. There are now more than 100 protected areas for snow leopards, 36 of which are found on international borders.