A near-death experience captured the eyes of millions when an enormous humpback whale breached on top of two kayakers. The event took place while the kayakers were enjoying a whale watching trip off Moss Landing in California on Sept. 12, 2015. Tom Mustill, a wildlife filmmaker, and Charlotte Kinloch, an accountant, were aboard the kayak when the whale breached on them.

Mustill was able to track down this whale that nearly killed him in the documentary film “The Whale Detective,” and in the process, he dove into the many mysteries surrounding the massive ocean dwellers. 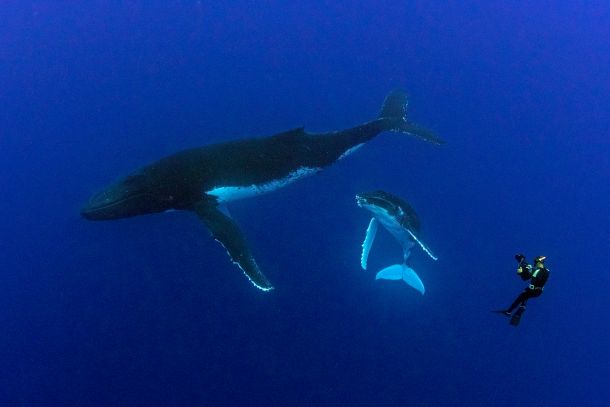 Whales spend the majority of their lives deep beneath the surface, so it’s no surprise that many mysteries remain about these sea giants: How many humpback whales are there? How long do they live? Why do they sing? Are they altruistic?

And more specifically to Mustill, where is Prime Suspect, the whale that nearly killed him?

How Many Humpback Whales are There?

While scientists do not have an exact answer to this question, the whale photo-identification database, Happywhale, is helping to determine a better estimate. The database uses a defining feature of whales to identify them – the whale’s tail.

“A humpback’s life story is written in the unique pattern of scars on its tail flukes,” Mustill explains in the documentary. Bite marks of killer whales, scars from entanglement in fishing gear, and scars from barnacles can be used for identification.

The database is run by Ted Cheeseman, who has looked at more than 100,000 images of whales. Thanks to the work of citizen scientists, Happywhale now has more than 200,000 whale photos, with more than 30,000 individual whales identified.

Cheeseman has identified 1,500 whales in the last three decades, using humpback tail flukes from photos provided by both scientists and whale watchers.

While there are likely more whales than the number identified on the database, these numbers help to provide a rough estimate.

How Long do Humpback Whales Live?

There are several whales that are at least 40 years old, based on the first and last time they were spotted. Currently, the humpback whale with the ID NA-0030 holds the current record of 42 years. It was first spotted on July 1, 1975, and was last spotted on July 25, 2017, around Canada.

These statistics provide an idea of a humpback whale’s lifespan, but the actual lifespan is likely much longer.

Why do Whales Sing?

Humpback whales are widely known for their songs. Male humpback whales are spectacular singers, according to the Monterey Bay Aquarium Research Institute (MBARI). They can produce complex songs that can last more than 15 minutes and may be repeated for hours.

While scientists do not currently have a definitive reason for their songs, many theories exist.

Mustill spoke with MBARI biological oceanographer John Ryan to learn more about whale songs during “The Whale Detective.” Ryan recently published a study in September 2019 that shows how humpback song in Monterey Bay varies over days, months and years.

MBARI installed an underwater microphone, or a hydrophone, on the seafloor outside Monterey Bay in 2015. Sounds picked up by the hydrophone have been recorded almost continuously since the installation, capturing thousands of hours of humpback songs.

The study found that in the Monterey Bay National Marine Sanctuary, humpback song is most active from November to January during the night hours. MBARI provides live streams of whale songs and a recording library on their website:

Previous theories from marine-mammal experts believed that male humpbacks only sang during courtship and mating, as a means to attract females and to compete with other males. However, the recent data shows that the whales also sing while hunting for food and migrating along the coast.

The newer data also shows that whales sing much less frequently during the daytime. A similar pattern of humpback songs is also found around Hawaii and off South America. Researchers speculate that the whales focus on feeding during the daytime and thus have more time to sing at night.

“We’ve studied humpback whale song, initially to address a simple question: When does it occur in habitat that is particularly important to the foraging ecology of the Northeast Pacific population?” Ryan said in an email to NATURE. “The next question is how the song evolves through time.”

Humpback song is considered to be an essential mode of cultural transmission in this species, Ryan told NATURE.

“For example, one study shows how two humpback whales that migrated from the Indian Ocean to the Pacific Ocean and joined a population with about 100 singers had a major cultural impact. The song the two were singing completely replaced the song that was being sung by the much larger population that they joined,” Ryan said.

According to Ryan, it is challenging to study humpback song structure and its evolution, but scientists are using machine learning approaches for this effort.

In “The Whale Detective,” Mustill speaks with Nan Hauser, the Director of the Cook Islands Whale and Wildlife Centre, who has spent much of her life studying whales in the Cook Islands. She speaks about a particularly strange encounter with a humpback whale.

Humpbacks normally avoid touching people and Hauser would never normally touch a whale, but she felt she had no choice in this particular situation.

“I couldn’t push fifty thousand pounds away from me, but I knew that I could push me away from fifty thousand pounds. It tried to tuck me under his fin and literally would swim until I could be under his fin and I’d hold on to it, so that he couldn’t hold me there, because I would drown,” Hauser said in the documentary. “And his eye was right next to mine, he had this eye-widening where you see the whites of his eye. It was painful and it was very, very scary. This went on for ten and a half minutes, until I saw the shark. The whale came right up behind me and pushed me to the boat.”

Do whales feel empathy for other species? Evidence suggests it's possible. The Whale Detective from Nature | PBS airs Wed at 8/7c. #NaturePBS

“And climbing up on the back of the boat and the whale was still there,” Hauser said. “This is not a normal thing. I just know that this incredible, altruistic behavior.”

Altruism is when you commit an act to help or protect another life without expecting anything in return. “What did this whale gain from any of this, other than pushing me to the boat and protecting me?” Hauser questioned.

Hauser’s experience is not the only one of its kind. Humpbacks have been seen coming to the rescue of seals, sea lions, dolphins and even giant ocean sunfish.

Dr. Joy Reidenberg also chimes in on this theory.

“Are they really that altruistic? Do they really care about saving other animals? I don’t want to think it initially, as a scientist, because I feel like I’m anthropomorphizing the whale. But when you see more and more and more evidence of these animals saving other animals, then you have to start thinking, is their social awareness of other species so high that they feel empathy to other animals, that they want to save those animals?” Reidenberg said in the documentary.

Where is Prime Suspect?

Through extensive research and a series of detective work, Mustill was able to identify the whale that nearly killed him, whom he dubbed “Prime Suspect.”

“Prime Suspect is one of the whales that we’ve regularly seen on the California coast, going back to 2008, an animal that was actually first identified as a calf and we actually knew who its mother was,” Calambokidis said.

At the time of the incident in 2015, Prime Suspect was seven years old. According to Happywhale, Prime Suspect has been spotted 14 times over the years. His first spotting was on Jan. 13, 2011, in Nayarit, Mexico, and he was last spotted on Aug. 5, 2019, in Monterey Bay, California.

“The whale [Prime Suspect] has a difficult-to-ID fluke, so it’s been a real treat to be able to successfully find him or her — we developed a new image recognition algorithm in collaboration with Google that has near-perfect vision for identifying humpbacks, and *definitely* wouldn’t have found these sightings without that,” Cheeseman told NATURE in an email.

Mysteries still surround Prime Suspect, such as what caused him to breach on that fateful morning, what caused the scars on his tail, and where he is now.