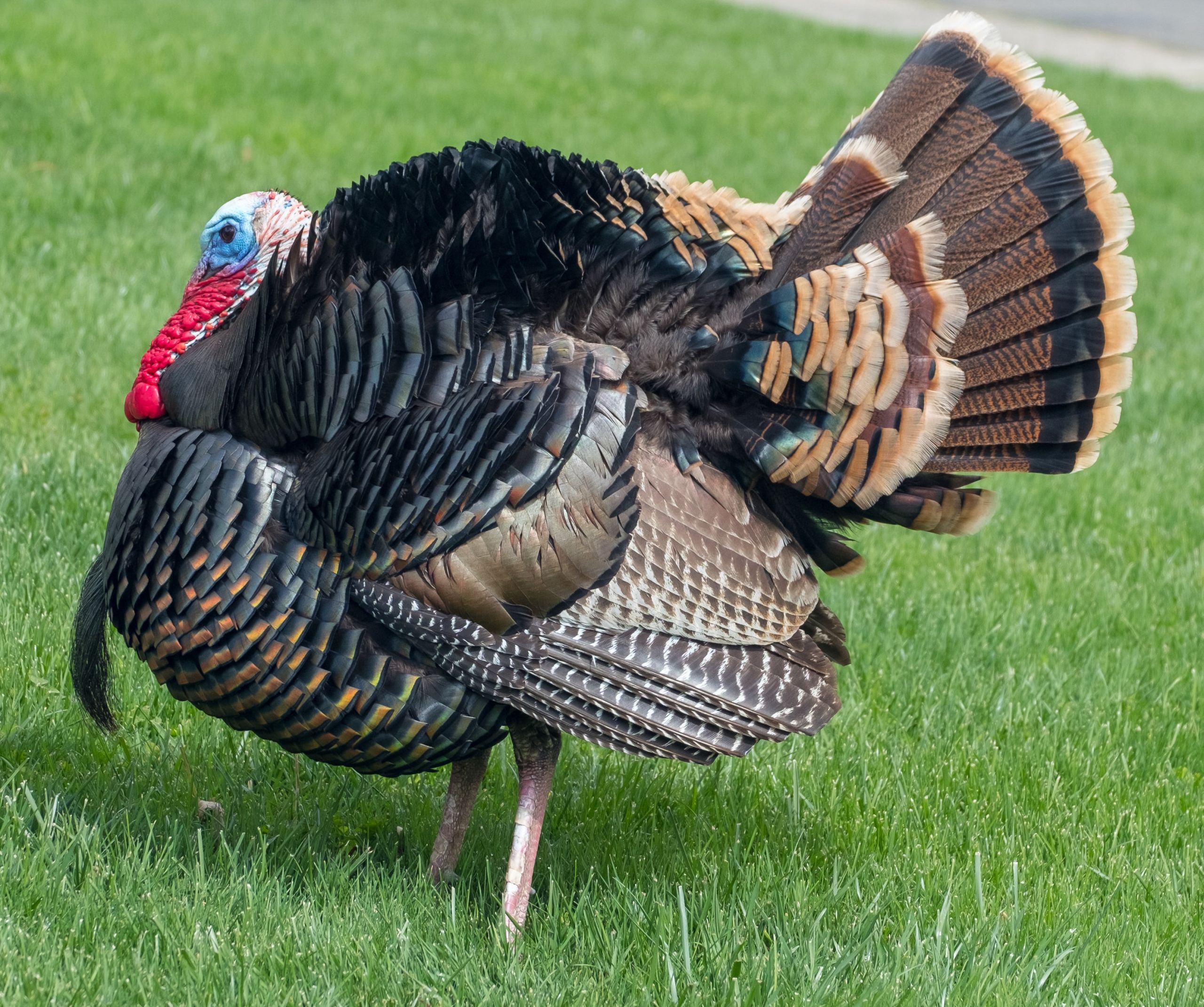 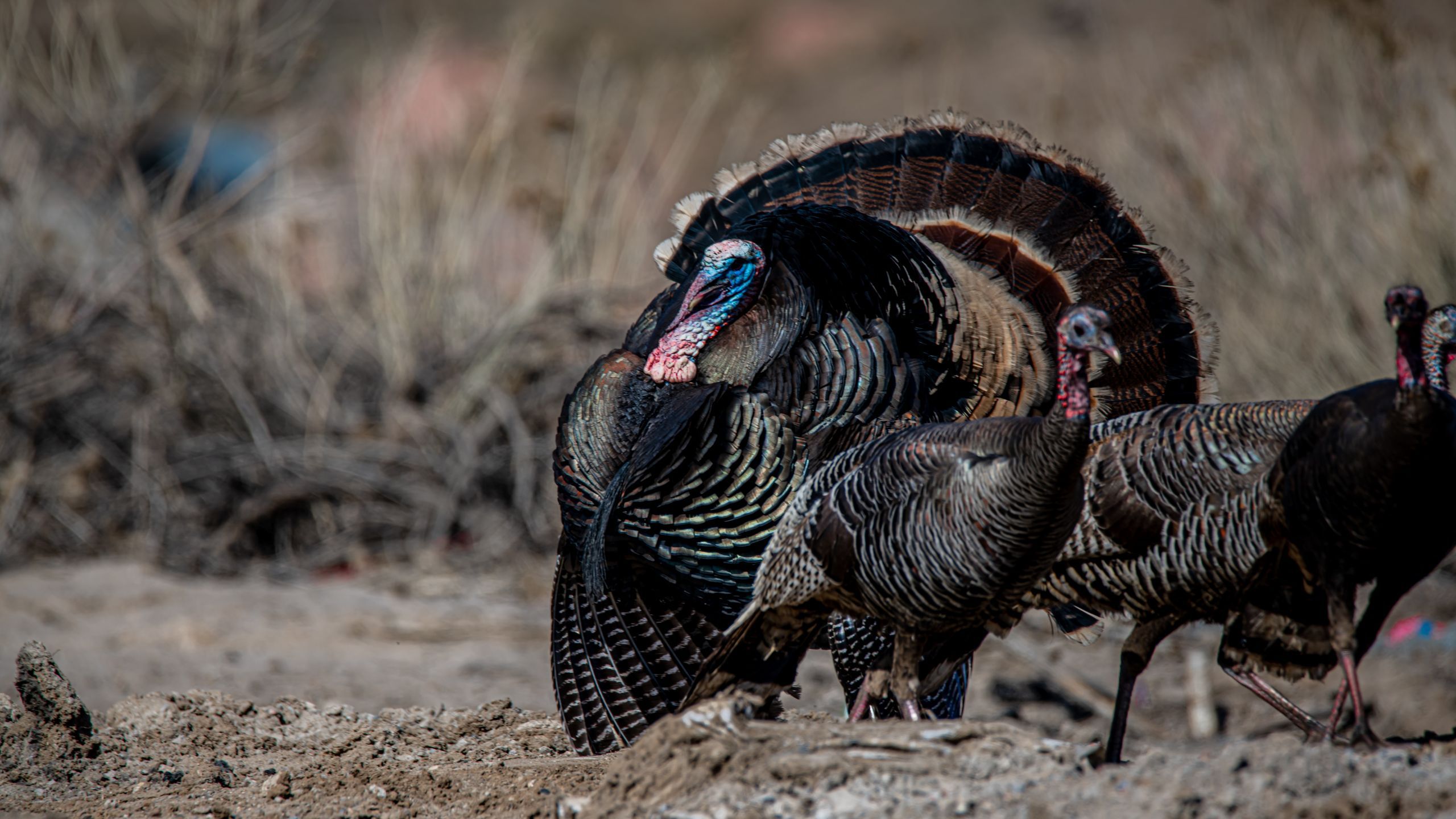 The wild turkey is the heaviest member of the Galliformes order. The male typically weighs between 11 to 24 pounds and is 39 to 49 inches long. The female, significantly smaller than the male, weighs 5 to 12 pounds and is only 30 to 37 inches long. Despite their large size, wild turkeys can run at speeds up to 25 mph and fly up to 55 mph.

The male has a featherless, red head and throat and a body covered in red, bronze, and gold iridescent feathers. When trying to attract a mate, the male will display, fluffing out the feathers on his body, fanning out his tail feathers, and dragging his wings as he struts. The male typically has a “beard,” a patch of course feathers growing from the center of its breast. The female’s plumage is duller, consisting mostly of browns. Each wild turkey has approximately 5000 to 6000 feathers. Other distinctive physical features:

Spurs: Bony spikes on the back of each of the turkey’s lower leg. The male will use his spurs to spar with other males.

Wattle: A flap of skin under the turkey’s chin.

Caruncles: Fleshy bumps that grow on the turkey’s head and throat.

Snood: A fleshy flap that hangs from the beak.

While both the male and female have spurs, wattles, caruncles, and snoods, they are far smaller and less distinctive on the female. 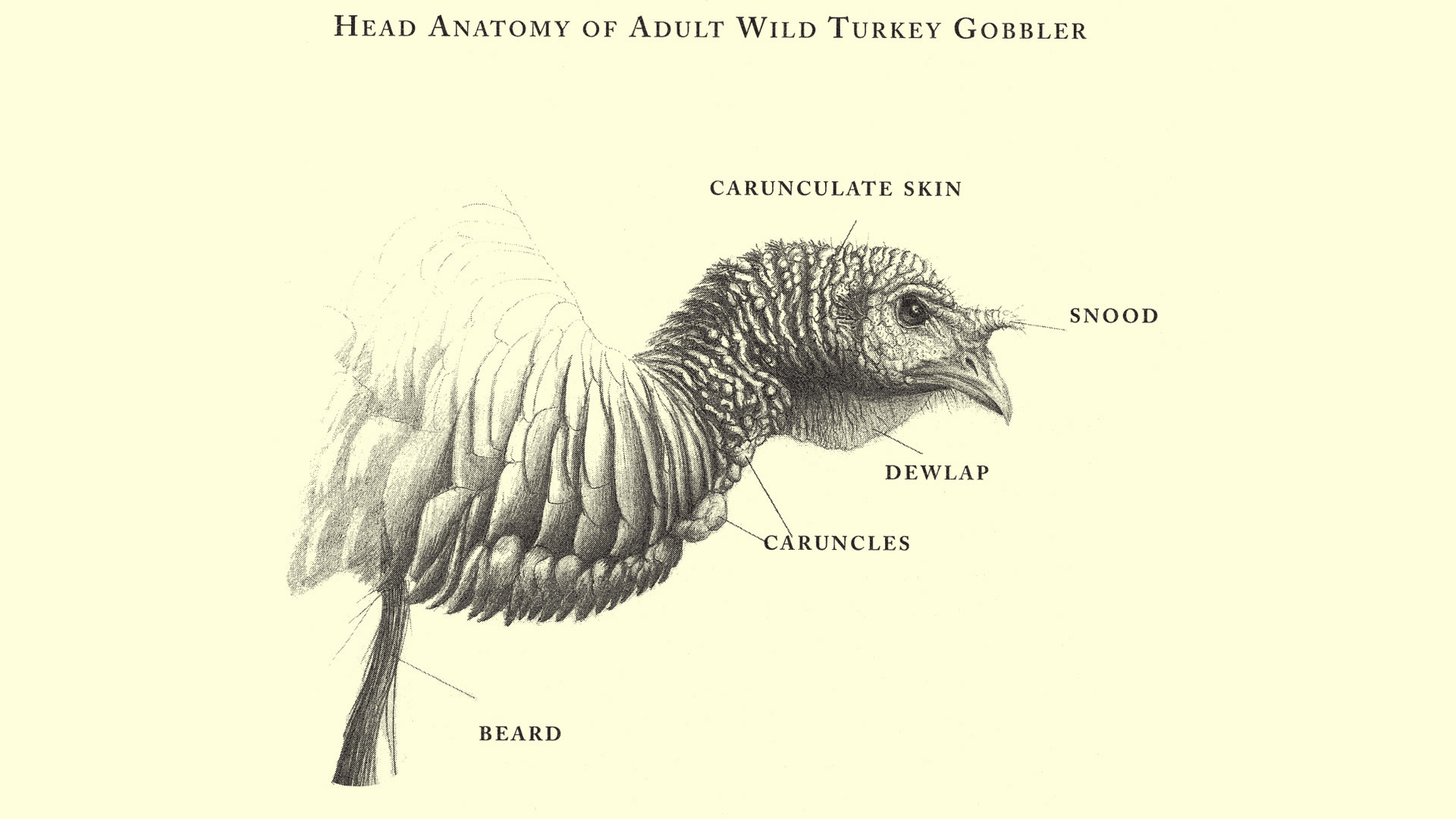 The wild turkey is an omnivore. It feeds on acorns, nuts, seeds, berries as well as small amphibians and reptiles.

Wild turkeys can be found in open woodland, savanna, grasslands, and swamps.

The wild turkey is native to North America and is primarily found in eastern and central areas of the United States. 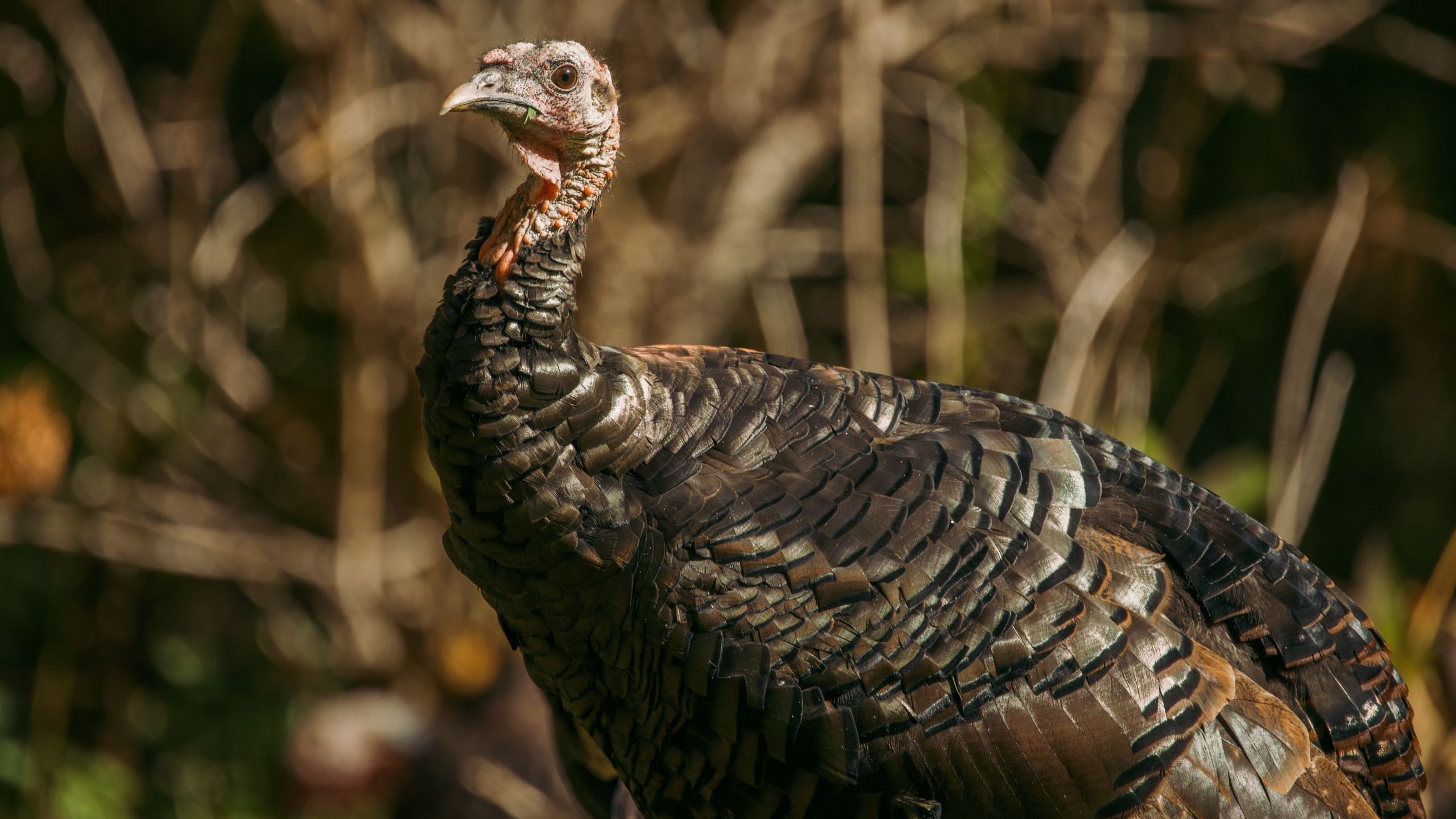 Male wild turkeys are polygamous, mating with several female hens during each mating season. In the spring, a male gives a gobbling call to attract females. To attract a female, the male displays by puffing out his feathers, raising and spreading his tail, and dragging his wings. Then in this exaggerated posture, they strut, rattling the wing feathers and making humming sounds. This behavior is commonly referred to as strutting.

After breeding, the female typically lays about 10-15, sometimes 4-18, over a two-week period, though larger clutches of eggs have been observed. Nests are shallow dirt depressions surrounded by vegetation. The female will incubate her eggs for about 28 days.

The male provides no parental care. Newly hatched chicks follow the female, who feeds them for a few days until they learn to find food on their own. The chicks band into groups as they grow, which can compose of several hens and their broods. Winter groups can exceed 200 turkeys. 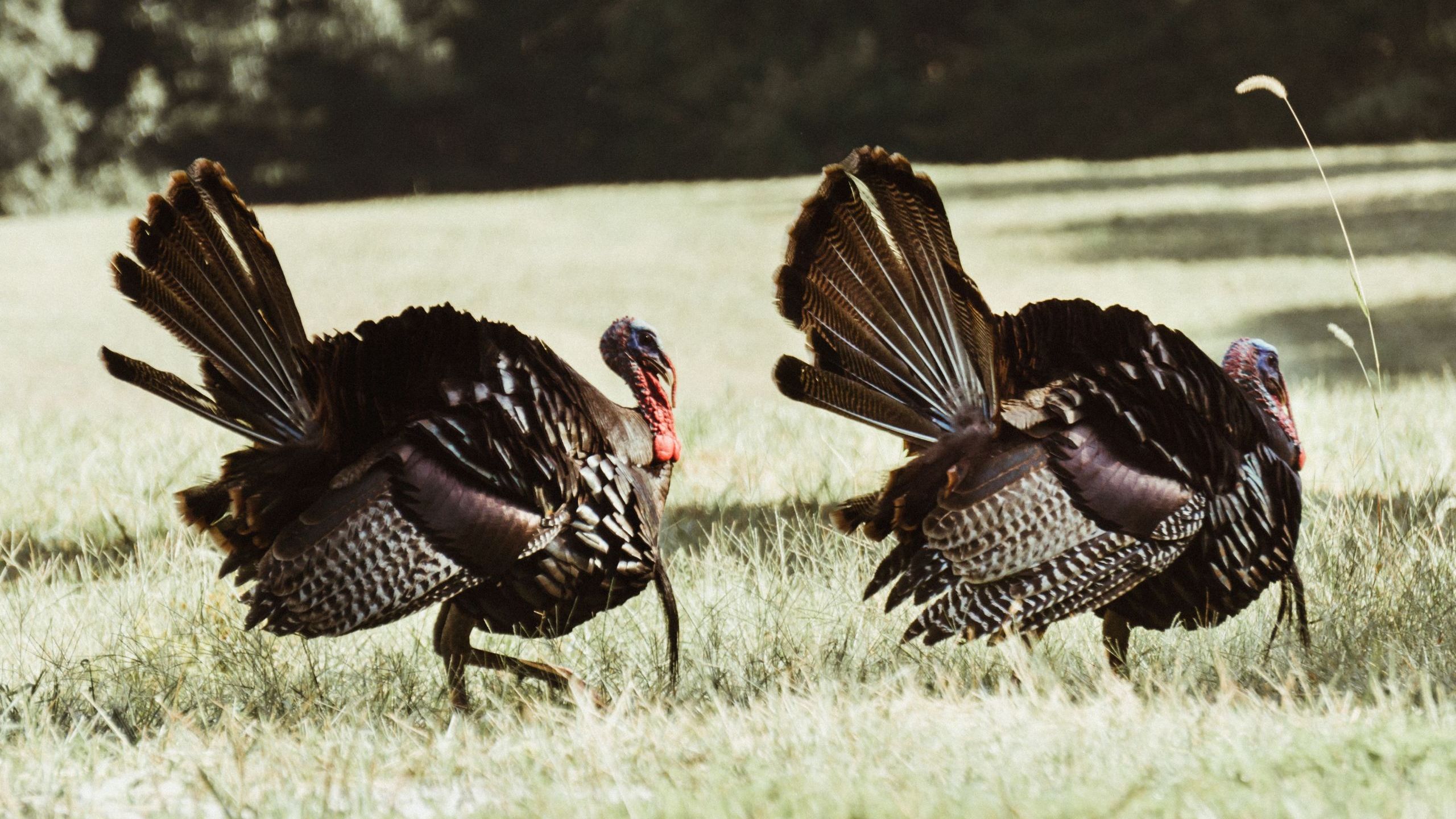 Male wild turkeys breed with multiple females and form all-male flocks outside of the breeding season. Meanwhile, adult females lead the chick-rearing. The chicks travel in a family group with their mother, often combining with other family groups to form large flocks of young turkeys accompanied by two or more adult females. Each sex has an independent pecking order, with a stable female hierarchy and a constantly changing male hierarchy.

While they mostly walk around, wild turkeys can also run and fly. When they feel threatened, females tend to fly while males tend to run. At sundown, turkeys fly into the lower limbs of trees and move upward from limb to limb to a high roost spot. They often roost in flocks, but sometimes individually.

Wild turkeys live about three to five years in the wild.

Wild turkeys are popular among hunters. The U.S. Fish and Wildlife Service estimates 21 percent of all U.S. hunters pursue turkey, making it the second most-sought game after deer. At the beginning of the 20th-century, wild turkey populations were decreasing due to hunting and habitat loss. But beginning in the 1940s, efforts to save the species have helped populations rebound considerably. In the early 1900s populations were estimated at 30,000. Current numbers of wild turkeys are estimated at 7 million. 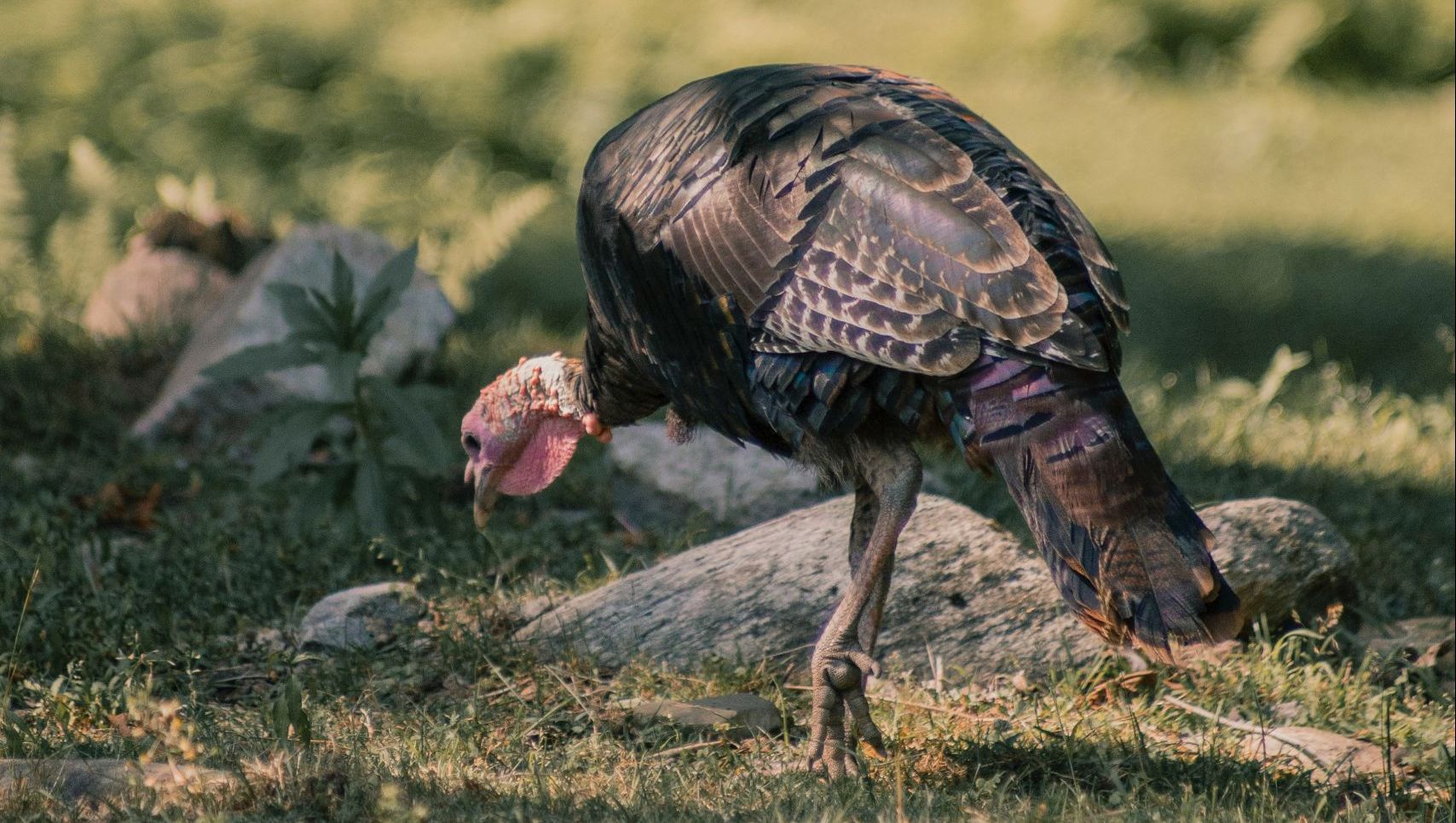 The wild turkey is currently listed as “Least Concern” by the IUCN.

The wild turkey is listed as “Least Concern” and populations increasing, thanks to the help of conservation efforts. In the early 20th-century, unsuccessful efforts were made to use farm turkeys to restore wild populations. By the late 1940s, they began to successfully transplant wild-caught turkeys into suitable habitats.

Sources: a previous NATURE post, All About Birds from Cornell University and the National Audubon Society.