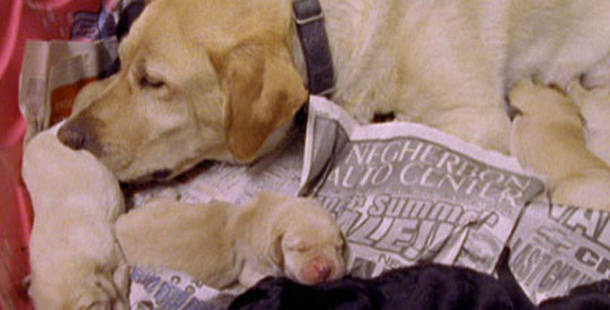 Each of the dogs on the NATURE program is extraordinary in its own way. Here’s a closer look at a few of them.

Chip, a border collie on a farm in England, works for a living — but if you gave him a vacation, he’d be miserable. Chip was born with an instinctive desire to herd sheep. He uses body language to keep the flock under control. Border collies are highly intelligent, and they also have a lot of energy. Chip and seven other border collies sometimes willingly work 16-hour days herding the 2500 sheep on the farm. In fact, if border collies don’t get enough stimulation, they can become hyperactive and snappish. Their herding instinct drives them to run around other dogs, humans, or even kitchen tables, all in an effort to obey their genetic command to protect the flock. Herding comes so naturally to border collies that Raymond McPherson, the farm owner, says he is completely dependent on the dogs to run his farm, especially Chip, whom he calls “the best.”

Cinder is a mixed-breed dog who can predict when her handler, Yvonne, will have an epileptic seizure. It is not totally understood how this “sixth sense” develops, but Cinder can somehow sense an oncoming seizure and warn Yvonne by behaving in a certain way. Yvonne knows that when Cinder begins to act that way, it is time to lie down in a safe place and await a seizure. Cinder then protects Yvonne from moving or endangering herself. Cinder was not trained to detect seizures; she simply knows how innately. “It shows the amazing talents dogs have,” says EXTRAORDINARY DOGS producer Hildy Rubin. “It wasn’t just that this dog predicted seizures, but the two of them had an incredibly strong bond even though they had only known each other for three weeks.” Harnessing Cinder’s natural ability, Yvonne taught her how to act when someone is having a seizure. Then, Cinder was placed with someone who needed an alert dog and Yvonne began training another candidate.

Hasty, a Golden retriever, is involved in a different kind of rescue: he locates avalanche victims. It takes months of training to teach Golden retriever puppies how to zero in on skiers buried in the snow and lead the rescue team to the right spot. But to the dogs, it all seems like play. Once trained, these dogs help ski patrol teams find unlucky back-country skiers who become trapped under the snowpile of an avalanche. Hasty’s keen sense of smell is a powerful search tool, locating skiers who may be buried beneath 6 feet or more of heavy snow. Since someone buried in snow may have only 30 minutes’ worth of air, Hasty’s trainers drill him constantly to cut his response time.

Molly and Scooter are ordinary dogs with a lot of love to give, which makes them perfect therapy dogs. Their job is to do just what comes naturally: offer love, unconditionally — in this case to hospital patients in need of cheering. Once a month, Sue, their owner, takes them to a local hospital in Maryland, where they visit children who are very ill. Using nothing but their tongues, furry bodies, and considerable charm, Molly and Scooter do a lot to lift the kids’ spirits.

Seeing-eye dogs have been assisting the blind for nearly 80 years. Today, dogs also perform many other services for people with disabilities. Chad is a teenager with cerebral palsy. While most of us take for granted things like opening doors, getting food from the refrigerator, or turning on the light, for a person with a disability, these can be momentous tasks requiring someone else’s help. For Chad, that help comes from a service dog — a German shepherd named Twany. Twany was trained by the Prison Pet Partnership Program, in which prison inmates work with dogs rescued from shelters to train them as service dogs. She goes everywhere with Chad, even taking the bus to school with him every day. As for Chad, in addition to the increased freedom from his disability, he now has a devoted companion and the good feeling that comes from taking care of someone who needs him.