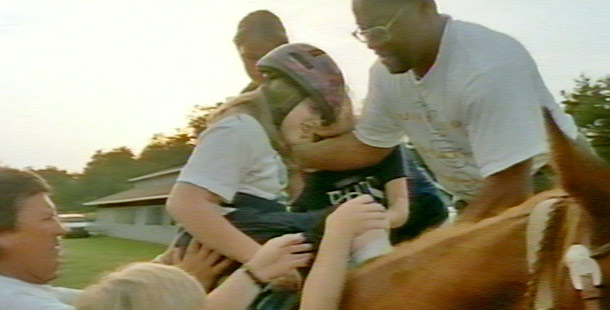 The horse has long been a symbol of freedom. But for disabled people confined to wheelchairs, time spent riding can take on a special meaning — a chance to break free for a while from the confines of everyday life and challenge stereotypes about the disabled.

NATURE’s HORSES profiles the remarkable story of one woman who has dedicated her life to nurturing this therapeutic bond between horses and people. Carol Wooley has loved horses since she was a child. “I wanted to have a horse ever since I can remember,” she says. Finally, at 19, she got her wish: “A two-year-old palomino who tried to kill me a few times, but we got along,” Wooley remembers. Indeed, she ended up riding the horse for 22 years.

In 1996, however, Carol took her love of horses one step further. Two weeks after the Atlanta Olympic Games, another world-class competition came to town: the Paralympics, for the world’s best disabled athletes. Organizers needed horses for equestrian events and Carol decided to help out, taking time off work to bring several horses to the games. One was an old swaybacked hunting pony named Carousel.

Carousel proved to be too much to handle for several riders, but then Brita Anderson of Denmark took the reins. “Brita and Carousel made a connection,” Wooley recalls. “He knew exactly what she wanted and she knew how to get the most out of him . . . they were a perfect match.”

Indeed, Anderson and Carousel went on to win a gold medal in dressage riding, a competition that puts horse and rider through a demanding, disciplined series of routines in a show ring. “Carousel hadn’t done dressage work since I don’t know when,” Wooley recalls. “But he went out there like he’d always done it.” The unexpected win “had to be one of the high points of my life,” Wooley says.

In fact, her Paralympic experience changed the direction of her life. She never returned to her previous job as a graphic artist. Instead, she started a nonprofit therapeutic riding school on a small farm about 100 miles south of Atlanta. The Carousel Riding School is one of some 600 such schools in the United States which use riding as a way to improve the lives of those dealing with disabilities, both physical and emotional. For people who must often rely on others to move their wheelchairs from place to place, the freedom of horseback can be particularly fulfilling, Wooley says. “People who are tired of being pushed around can get a lot psychologically out of being able to control their own horse,” she says.

Today, a “fat and happy” Carousel lives on the farm in semi-retirement, along with 15 other horses and ponies. Donations and more than two dozen volunteers help keep the place going, including one who traveled from Japan intent on learning skills she can take home with her. About three dozen riders from seven surrounding counties use the facility, keeping everyone “plenty busy,” says Wooley. “You wouldn’t believe the amount of work that gets done around here.” But there is always more to do: development is encroaching on the 17 acres the school rents, meaning it may soon be sold. So Wooley is beginning to look for a new home.

And though the transition — at age 53 — to a new career “has been kind of rough financially” for Wooley, she says she doesn’t regret the decision. The rewards of her work — from a young girl who smiled broadly the first time she held the reins to the growing confidence of a disabled dressage rider intent on making a future Paralympic team — “makes you proud to be human,” she says. “It brings out the best in people.”

Dolphins: Spy in the Pod | Part 2
Touching the Wild
Hippos: Africa's River Giants
Voyage of the Lonely Turtle
Dogs in the Land of Lions
Deep Jungle: The Beast Within