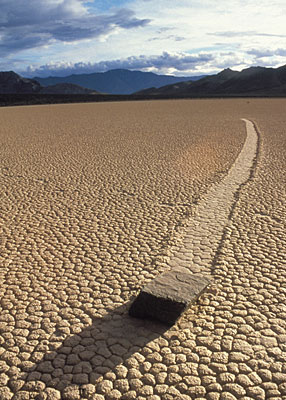 It is one of Death Valley’s most intriguing geological whodunits — the sliding rocks of the Racetrack Playa.

On an ancient lakebed located on the western side of Death Valley National Park, boulders that weigh up to 700 pounds sail across the almost perfectly flat terrain, leaving grooved trails in their wake. As NATURE’s Life in Death Valley shows, each of these furrows chronicles a rock’s journey, ranging from a mere few inches to nearly 3,000 feet. Some tracks manifest in straight bold lines, while others coil back on themselves in sinuous arcs.

Despite a century of scientific investigation, this curious phenomenon has confounded the geological community and park visitors alike. To this day, no one has ever seen the rocks move. But in lieu of eyewitnesses, countless theories have been put forward over the years in an effort to explain the reasons behind the migrations.

One early suggestion was that the rocks were driven by gravity, sliding down a gradual slope over a long period of time. But this theory was discounted when it was revealed that the northern end of the playa is actually several centimeters higher than the southern end and that most of the rocks were in fact traveling uphill.

Though no one has yet been able to conclusively identify just what makes the rocks move, one woman is coming closer to solving the mystery. For the past ten years, Dr. Paula Messina, professor of geology at San Jose State University in California, has made it her quest to understand what has bewildered geologists for decades. “It’s interesting that no one has seen them move, so I am kind of sleuthing to see what’s really going on here,” says Dr. Messina.

Many scientists had dedicated much of their careers to the racing rocks, but the remoteness of the area kept their research limited in scope. No one had been able to map the complete set of trails before the advent of a quick, portable method known as global positioning. Dr. Messina was the first to have the luxury of this high technology at her fingertips.

In 1996, armed with a hand-held GPS unit, she digitally mapped the location of each of the 162 rocks scattered over the playa. “I’m very fortunate that this technology was available at about the same time the Racetrack captured my interest,” she says. “It took only ten days to map the entire network — a total of about 60 miles.” Since then, she has continued to chart the movements of each rock within a centimeter of accuracy. Walking the length of a trail, she collects the longitude and latitude points of each, which snap into a line. She then takes her data back to the lab where she is able to analyze changes in the rocks’ positions since her last visit.

She has found that two components are essential to their movement: wind and water. The fierce winter storms that sweep down from the surrounding mountains carry plenty of both.

The playa surface is made up of very fine clay sediments that become extremely slick when wet. “When you have pliable, wet, frictionless sediments and intense winds blowing through,” offers Dr. Messina, “I think you have the elements to make the rocks move.”

At an elevation of 3,700 feet, strong winds can rake the playa at 70 miles per hour. But Dr. Messina is quick to point out that sometimes even smaller gusts can set the rocks in motion. The explanation for this lies in her theory, which links wind and water with yet another element: bacteria.

After periods of rain, bacteria lying dormant on the playa begin to “come to.” As they grow, long, hair-like filaments develop and cause a slippery film to form on the surface. “Very rough surfaces would require great forces to move the lightest-weight rocks,” she says. “But if the surface is exceptionally smooth, as would be expected from a bio-geologic film, even the heaviest rocks could be propelled by a small shove of the wind. I think of the Racetrack as being coated by Teflon, under those special conditions.”

In science, hypotheses are often based on logic. But over the years, Dr. Messina has discovered that on the Racetrack, logic itself must often be tossed to the wind. “Some of the rocks have done some very unusual things,” she says.

In her initial analysis she hypothesized that given their weight, larger rocks would travel shorter distances and smaller, lighter rocks would sail on further, producing longer trails. It also seemed reasonable that the heavier, angular rocks would leave straighter trails and rounder rocks would move more erratically.

What she discovered surprised her. “I was crunching numbers and found that there was absolutely no correlation between the size and shape of the rocks and their trails. There was no smoking gun, so this was one of the big mysteries to me.” What appears as a very flat, uniform terrain is in fact a mosaic of microclimates. In the southeastern part of the playa, wind is channeled through a low pass in the mountains, forming a natural wind tunnel. This is where the longest, straightest trails are concentrated. In the central part of the playa, two natural wind tunnels converge from different directions, creating turbulence. It’s in this area that the rock trails are the most convoluted. “What I think is happening,” proposes Dr. Messina, “is the surrounding topography is actually what is guiding the rocks and telling them where to go.”

Some people have suggested attaching radio transmitters to the rocks or erecting cameras to catch them “in the act” in order to put an end to the speculation. But as Death Valley National Park is 95 percent designated wilderness, all research in the park must be noninvasive. It is forbidden to erect any permanent structures or instrumentation. Further, no one is permitted on the playa when it is wet because each footprint would leave an indelible scar.

As for Dr. Messina, she is content in the sleuthing. “People frequently ask me if I want to see the rocks in action and I can honestly answer that I do not,” she says. “Science is all about the quest for knowledge, and not necessarily knowing all the answers. Part of the lure of this place is its mystery. It’s fine with me if it remains that way.”

Invasion of the Giant Pythons
Bears of the Last Frontier: Arctic Wanderers
Triumph of Life
Killers in Eden
Born Wild: The First Days of Life
The Sagebrush Sea