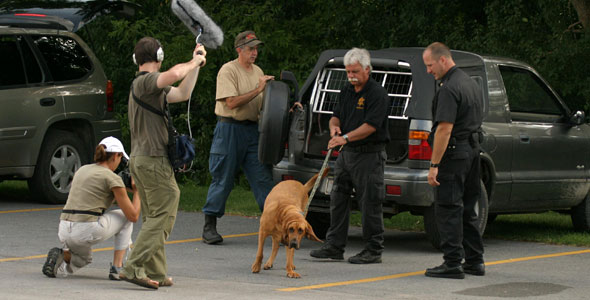 NATURE’s Underdogs takes us into the lives of two troubled canines and the trainers who helped them reach their full potential as the intelligent, able working dogs they were bred to be. NATURE asked the film’s associate producer, Aidan Woodward, to give us a behind-the-scenes look at the making of the production.

How did you go about choosing the dogs and the trainers that were featured in Underdogs?

The selection process was tedious. When making any program, you have to weigh many factors, such as a person’s personality, character, and their ability to express him or herself, as well as their genuine skills and potential for success. In the case of choosing dogs for the show, those factors are more difficult to determine because the candidates cannot speak.

Initially, the advice of behavioral experts, historians, and biologists helped to identify the breeds of dog that would be visually interesting and comparably different to one another. Once we had narrowed down this breed “wish list,” we started the time-consuming work. Two months of persistent e-mails, [phone]calls, and visits to every dog shelter in the U.K. and bloodhound shelter in the Northeastern U.S. rewarded us with about 10 canine candidates. These were further narrowed down according to their personal story, desperation of their situation, and [our] overall impression [after] having met the animal. Herbie, the beardie, and Holly, the bloodhound, had sad stories of abandonment and both were facing an unknown future with no likely sponsors in sight.

Finding the trainers was easier. Once we had located our potential dogs, we followed a logical trail to the doors of as many breed-specific trainers as possible. Availability was a high priority on our list because the undertaking we were hoping to film was not a part-time commitment. Ten candidates were swiftly narrowed to two. Barbara Sykes (collie trainer) and Larry Allen (bloodhound trainer) have very impressive credentials as well as being caring, committed, responsible, fun-loving individuals whose knowledge of their chosen breed is second to none. We were exceptionally lucky to have found these two inspiring people.

Was it difficult to witness so many dogs in need?

It was difficult visiting the dog shelters because often we were led into the canine equivalent of Death Row. Cage after cage contained a dog with a heartbreaking tale of neglect and abuse. Leaving them behind was hard, and I have nothing but admiration for the people who work in such emotionally challenging places that make every effort to provide a bit of love, care, and attention wherever possible to such dogs in need.

Making any film requires time. When making an observational film, the time factor is doubled. On any given day, we tried to start filming when the trainer and dog woke up and finish when the dog went to bed. We always listened to the advice of the trainer and based our filming on their predictions of what would happen during a particular period of training. My memories of filming Herbie and Barbara are of being on the windy moors in the north of England. Herbie raced after sheep in a circle around us. The filming was contained in one field, which meant we could try to predict what he might do and where he might go. After a few hours, we would retreat to the cozy kitchen where Barbara would feed us bacon sandwiches and tell us how she intended to encourage Herbie to improve.

My memories of Holly and Larry always make me laugh. Filming would be a smooth process until Holly caught the scent she was supposed to be tracking. Ten times out of 10, she would drag Larry off into the undergrowth while we tripped over our equipment in an effort to keep up with her. It took weeks of practice before we finally were able to keep up with the dynamic duo as they raced through fields, trees, rivers, and parking lots.

Did the stories evolve the way you hoped they would?

I can honestly say that the overall structure of how the program turned out was quite close to our guesses before filming. Training times between breeds to achieve completely different tasks vary greatly. We knew there would be ups and downs — in fact, we hoped for as many difficult and challenging scenes as possible to make the journey our goal rather than the destination. We didn’t mind if the dogs did not fully succeed in their respective tests at the end of our filming because we knew that [they] had homes for life.

But I must say, I was amazed at how well Holly the bloodhound took to her training. Watching the look on the faces of the Massachusetts State Police when she ripped their test course apart was fantastic. We felt like proud parents!

In the film, we follow Herbie and Holly for 12 weeks. How did you decide on that time frame? Were there any concerns that it wouldn’t be enough time to see a marked difference in the dog’s behavior?

The time frame was determined by two factors — the trainers themselves and the budget for filming. The average novice bloodhound can achieve a certain level of competence after eight to 12 weeks. A novice beardie, however, requires years of attention. Working with sheep or tracking a scent are skills that require completely different training approaches and, therefore, should not be judged in parallel on achievements made during a set timescale. Barbara’s success with Herbie was phenomenal considering she only had 12 weeks to turn a sheep muncher into a well-behaved farm dog. The only reason he underachieved at the final test was because he simply wasn’t ready for such a huge change in variables — new sheep, new people, and new environment thrown at him all at once.

How did the dogs react to the camera and crew?

We knew the crew for this show had to be small. We didn’t want to spook the dogs by having an army of people fussy about them. For this reason, we multi-tasked. I acted as associate producer and sound recordist, while Karen Walsh operated the camera and directed. The trainers were comfortable being shadowed — [after] a day or two — at least that’s what they told us.

[Since] so many new variables were being presented to the dogs in their new home environments, we figured two more people would make little difference. Sure enough, the dogs treated us as familiar friends. They knew our scent and behaved as normally as could be expected.

We often worried that our filming might cause the dogs to lose concentration and want to play instead of work at the vital moment. During Holly’s final test, we ran ahead of her in order to film her entering a cornfield where the trail had been set. Following the scent perfectly, Holly ran along the side of the field toward us. We were terrified that she might overshoot the entry point because she wanted to say hello to us. Nonetheless, we had to carry on filming. For a few unbearable seconds, she stopped in her tracks, wagged her tail at us, and then charged off into the cornfield at the exact entry point.

Did anything happen off camera that you wish you’d caught on film?

Our main worry with the filming process was a question of being with the right dog at the right time. We wanted to film their “eureka” moments of change rather than read about what we’d missed in the journal [that each trainer kept.] At one stage, Larry told us he tried to do a routine clip of Holly’s nails and she practically tried to bite his arm off. We were upset to have missed that scene, so we asked him to tell us what happened in an interview, but it just wasn’t the same.

Did you find that the dogs could distinguish between work and play? How did the trainers handle that?

My impression is that dogs do not know they are working. They are following instinctive behavior passed down in their DNA. Trainers harness this behavior and refine it in order to achieve the desired end. Much of the training process exploits the play drive in the dog. As a result, you could say that play and work mean the same thing to a dog.

I would qualify this, however, by mentioning that dogs can pick up on the stress and adrenalin levels of their trainers. Larry would often say that his bloodhounds know if they are doing a practice scent trail or a real manhunt because they can feel the tension from the handler traveling down the lead itself. He often observed that his dogs would be pumped up for a real manhunt in a way that wouldn’t be so apparent during training sessions. Larry tries to help his dogs focus on work by using the exact same set-up rituals and vocal commands every single time he wants them to follow a scent. He buckles up the dog, gives it the scent in a bag, and then shouts, “Get to work!” From these repeated actions, the dog understands that scent trailing is the task at hand.

Likewise, the stress in body movement, decision making, and in the voice of a sheepdog trainer has a great effect on the dog’s behavior. But this is often too subtle for the layman to notice. Barbara would say that any self-respecting sheepdog just doesn’t want to play with a ball. They are so motivated by rounding up sheep that any other activity is pointless in comparison.

Can you give us an update on the latest successes of Holly and Herbie?

Herbie is fitting in very well to life on the farm. Barbara uses him to help teach novice trainers how to work with sheep for the first time. Because he is such a handsome beardie, Herbie is always popular with her clients.

Holly lives with her new handler, Sgt. Bruce Hirons, in Massachusetts. She has a little terrier dog as a brother at home, and we are waiting to hear about her first manhunt success.

Has the project made any lasting impact on you?

Having watched experts in action, I realize that no dog is bad. It is always the inexperienced, disrespectful, often over indulgent human owner that creates a dog with emotional and psychological baggage. Dogs become confused, insecure, and wayward when our behavior is inconsistent. We often ignore a dog’s action one day then tell the dog off for doing the same thing another day. No wonder people complain that their dog doesn’t know how to behave! Dogs need to be understood as dogs, not humans. At times of training, the experts know how to treat a dog as if it is a dependent member of the pack. As a consequence, the dog clearly understands its place and feels secure.

Do you have a dog?

I don’t have a dog because my work takes me abroad for long periods. But when I finally do get one, it might just be a bloodhound.