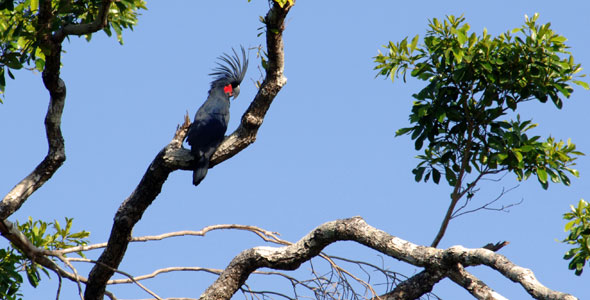 Birds have long defied the slur “bird brain.” With their well-developed brains — 6 to 11 times larger than those of like-sized reptiles — birds are capable of learning and mastering complex social behavior. But there’s one behavior that never ceases to fascinate — their ability to use tools.

As shown in “Parrots in the Land of Oz,” the Palm Cockatoo has learned to use tools with great creativity. The Australian bird employs a simple twig as a “lure for love.” Beating the stick on a hollow tree, the male demonstrates to the female that he owns this hollow, this piece of real estate. It’s the part of the mating ritual that assures female, his prospective mate, that he can provide for her.

The urge to mate is what moves the palm cockatoo to use tools. But there is an even stronger force that has inspired a range of tool use in various species of birds — the need to feed.

Perhaps the best-known avian tool user is the woodpecker finch of the Galapagos Islands. Although unrelated to a true woodpecker, the woodpecker finch forages in a similar way — prying up bark to uncover insects underneath. The true woodpecker has a long barbed tongue that serves as its natural tool for extracting the insects. The tongue of the woodpecker finch, though, is too short to sweep up bugs, so when the finch discovers insects, it flies to a cactus, breaks off a spine, and returns to spear its prey. If a cactus spine is not available, the Woodpecker Finch may break a twig off a bush or tree, and if necessary even trim it. The bird is clever enough not only to use a tool, it can even “manufacture” its instrument.

Like the Woodpecker Finch, some herons also engage in tool manufacturing. Striated Herons in southern Japan have been observed using insects, berries, twigs, and discarded crackers as bait to catch prey. Much like a human fisherman, the heron will cast the bait in the water, then crouch down and wait for the curious or hungry fish that comes to inspect the lure. The birds have even been seen to trim oversized twigs to the proper dimensions. While the herons can fish successfully without bait, their use of bait seems to increase the catch.

Crows and their relatives (ravens, magpies, jays) have long been known to be the most intelligent group of birds, so their ingenious use of tools may come as somewhat less of a surprise. But the wisdom to use humans and their machines as tools? Surely that must impress us. Carrion crows in Japan have actually been seen waiting for the traffic light to change before hopping out into the street to place walnuts in front of the tires of cars. When the cars drive over the nuts, hopefully cracking them open, the crows hop back into the street (free of traffic of course) to reclaim the shelled nuts.

But the New Caledonian outsmarts them all. This crow is known to use twigs, leaves, and their own feathers as tools to pull grubs from deep within tree trunks. Using their beaks as scissors and snippers, the birds even modify the hooks to suit the type of bark or the size of the crevice containing the food. The crows don’t throw the tools away after one use — they carry them from one foraging place to another. Now consider this: in a lab setting, a captive female crow bent a straight wire into a hook to retrieve food from a bucket. This makes the New Caledonian crow the only bird species capable of crafting tools from materials it does not encounter in the wild.

The fact that New Caledonian crows know how to use tools was perplexing to researchers. Is this skill innate (inherited) or learned? To find out, a team of scientists hand-raised four New Caledonian crows. Two of the four babies were shown videos of human foster parents giving tool-use lessons to other crows. Though all four juveniles used tools to pull food from crevices, the two offspring that watched the videos used the tools better and more often. The researchers concluded that tool use among New Caledonian crows was partly inherited and partly learned.

Birds may be crafty and creative when it comes to using tools, but they don’t always have to be elegant. Perhaps one of the least discriminating tool users, the burrowing owl, doesn’t get too fancy when selecting its tool of choice. The owl spreads animal dung in and around its burrow to provide a bait to attract dung beetles, one of the staples of the bird’s diet. Now that’s being resourceful.