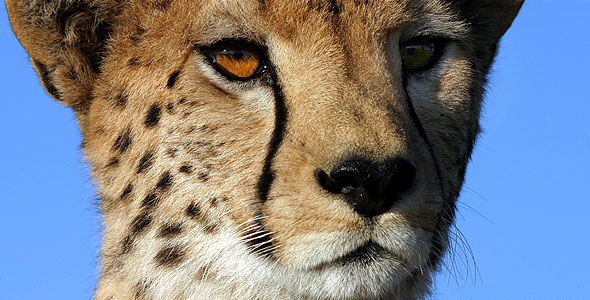 He was orphaned after his mother was killed by a lion. He was left alone when his brother, Sambu, suffered the same fate. Then he was attacked by three territorial adult male cheetahs and left on the brink of death. Toki the cheetah has had his fair share of brushes with the cruelty of life.

When Simon King decided Toki should be moved to new pastures, Ol Pejeta Conservancy was the best option. After going through an “adjustment period” that involved living in a more contained portion of the conservancy, Toki now lives within the confines of the main reserve of Ol Pejeta today. He continues to live as a wild cheetah in a huge, but securely fenced area. And Simon continues to be his human guardian angel. “Toki is in top form!” says Simon. “I visited him a couple of weeks ago (September 2007) in Ol Pejeta and found him resting in the shade with a tummy full of zebra he had killed. He hunts wild prey entirely for himself, but still lives in a predator-proof enclosure of some 4,000 acres, a patch of ground he shares with a host of other creatures (some of which end up as dinner) but no other large predators.” The difficult start to his life evidently didn’t compromise Toki’s physical form. Toki is a powerful cheetah, his muscles strong and solid, back and shoulders flexible, and his gait full of grace. “He always seems very content when I see him, purring deeply when I approach,” says Simon, “but I still feel there is something missing.”

That something may be the opportunity to father cubs of his own. “He has never met a female cheetah to my knowledge, and will not unless we help to engineer it. This would not be a hugely significant change to Toki’s life: he would be with his mate for a number of hours only, and then have nothing more to do with her,” says Simon. Still, just by passing his own genes on successfully, Toki would be bolstering the shrinking cheetah population and advancing the effort of cheetah conservation in Kenya.

There are fewer than 13,000 cheetahs left in the wild, and even these few are threatened by conflict with livestock and habitat destruction. “There is a great deal still to be done for cheetah conservation in East Africa, and in Africa as a whole,” says Simon. “Though they are a protected species, they are still heavily persecuted by some communities — a perfectly understandable reaction when they start eating goats, sheep or calves. They are creatures of big, wild country and increasingly their world is shrinking as more and more areas become developed and populated.”

Simon’s hope is that Toki’s future role is to act as an ambassador for his species, helping to educate communities about alternatives to killing big cats, such as developing other eco-friendly industries. “There is the obvious advantage of cats attracting revenue in the form of eco tourism, but there is much that can be done to help defend herds of stock against attack with dogs and careful husbandry.”

As for Simon’s future, you can check out what the ambitious filmmaker is up to on his Web site, www.simonkingwildlife.com. “Toki has been, and continues to be, an inspiration and a joy to have followed. He is very close to my heart. I sincerely hope that his future will be bright and that he may help to increase awareness of the plight of large predators in East Africa,” says Simon. “I shall continue to work towards Toki and all cheetahs having a fine quality of life, and hope that the films we have produced will encourage others to help conserve these magnificent creatures.”

Dogs in the Land of Lions
Equus "Story of the Horse" | Episode 1: Origins
The Beauty of Ugly
Voyage of the Lonely Turtle
Natural Born Rebels | Episode 1| Hunger Wars
Touching the Wild