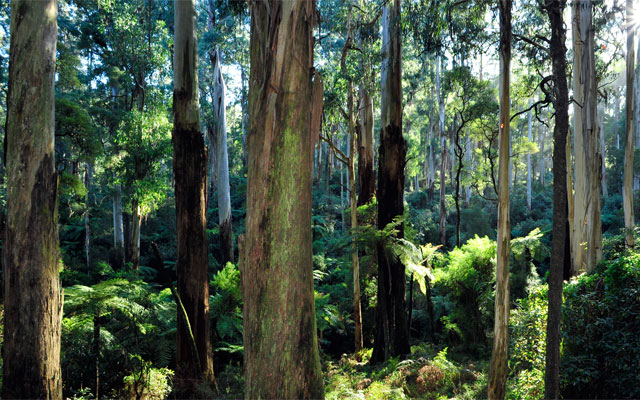 Size and Growth Rate: Mountain ash grows relatively quickly, with an average annual growth rate of 3 feet (1 meter). They are the tallest of the eucalypts, capable of reaching heights of up to 490 feet (150 meters) but generally grow to about 330 feet (100 meters). It’s the world’s tallest flowering plant.

Life Span: Mountain ash has an average lifespan of 400 years.

Reproduction: The primary form of reproduction occurs through dispersal of seeds. This process is often initiated during severe fires when intense heat releases seeds from their hard casings, called gumnuts. The seeds germinate on the forest floor, receiving a boost of nutrients from the ashes left behind from the fires, and flourishing in the sunlight which reaches the ground through now-bare tree branches. Mountain ash trees can also regenerate through shoots sprouting from dormant buds protected beneath the fire-insulated bark., or which are stimulated when trees suffer significant loss of top growth—though this form of regeneration happens far less frequently.

Appearance: The base of the tree is quite rough but, as the tree grows, this rough bark sheds large ribbons, leaving the highest part of the tree with a smoother exterior. The lowest branches are nearly 100 feet from its base. The mountain ash leaf varies in shape; clusters of white flowers blossom during Australia’s summer and autumn months, January to March.

Habitat: The mountain ash grows in deep soil in the cool, mostly mountainous areas of Victoria and Tasmania on the Australian continent. These regions are located at an approximate altitude of 3,300 feet (1,000 meters) with an average annual rainfall of 47 inches (1200 millimeters).

Conservation Status: The species is not considered to be at risk of extinction.