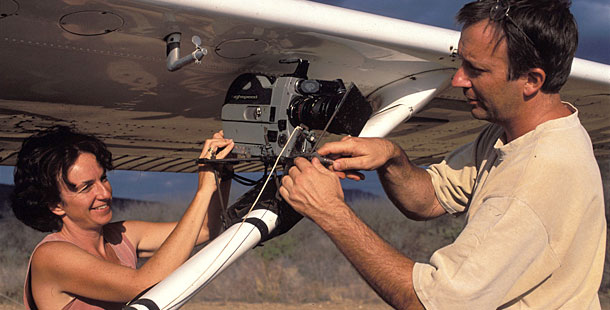 Wildlife filmmakers often go to great lengths to get that perfect shot. But not many end up installing a picture window in a ripe fig the size of a grape, just to watch what’s going on inside. That’s just one of the creative — and painstaking — steps that filmmakers Victoria Stone and Mark Deeble took to film the almost microscopic fig wasps that are the stars of NATURE’s The Queen of Trees. Using specialized, custom-built equipment, the pair spent two years in the Kenyan bush waiting for just the right moments to film these minuscule insects.

For viewers, it was worth the wait: Deeble and Stone present a remarkably detailed portrait of the fig wasp’s complex relationship with the sycomore fig, a tree that is a billion times bigger. Yet wasp and fig are forever entwined, dependent on each other for survival.

“It is an amazing relationship,” says Stone, who credits Climbing Mount Improbable, a 1997 book by evolutionary biologist Richard Dawkins, with sparking the idea for the film. But the couple, who have been making award-winning documentaries for several decades, knew it wouldn’t be an easy story to tell. The wasps are so small they can fly through the eye of a needle. Much of their most interesting behavior takes place inside a fig tree’s small fruit, hidden from view. And to top it all off, it can be hard to predict when key moments in the wasp-fig life cycle will occur, meaning the filmmakers would literally have to camp out near a tree and wait.

“We knew there’d be massive complications,” recalls Stone. “The most basic challenge was to film the behavior of the wasps inside the fig [without ending up with blurry or out-of-focus images]. And it couldn’t just look okay. It had to be beautiful and enticing.”

Deeble says technological advances — and a bit of ingenuity and patience — made it possible to overcome the complications. One key advance was the arrival of high-definition cameras that capture sharp, crisp images with a good depth of field at low light levels. Another was the team’s construction of a specialized, vibration-free work table that could be taken out into the field and used to film extreme close-ups of very small actors. “We’d set it up on a concrete platform in our camp, bolt down the camera, and then go get a fig from the tree,” recalls Deeble, who studied marine biology before becoming a filmmaker. To capture a particular scene of female wasps collecting pollen from tiny “gardens” inside the figs, the team even cut tiny windows into the fruit and covered them with strips of glass. When all went well, the wasps carried on, unaware of the peeping camera. “That was probably one of the most difficult 10-second scenes to get,” Deeble reveals. “It took weeks to get everything just right.”

Other weeks were spent erecting and moving around specialized towers and platforms that allowed the filmmakers to get up into the treetops, where showy birds called hornbills built their distinctive, prisonlike nests, and monkeys and birds feasted on fresh fruit. “Using towers takes a long time,” explains Deeble. “Even if you want to move just a few feet to get a new angle, you’ve got take the whole thing down again… ropes, pegs, everything. You can be lucky to get one or two shots a day.” The filmmakers had to be careful not to damage the trees as they worked, Stone adds.

Overall, the couple, their two young children, and a small team spent two years camped out near the magnificent, gnarled sycomore fig that is featured in the film. The filmmakers had discovered during a previous project on hippos that things could be slow at times; when there was nothing to film at the home tree, the team searched far and wide for other fig trees where interesting things were happening. It took them another six months to sift through all the film and assemble it into a compelling story.

The team is now working to make sure that The Queen of Trees is seen in Kenya. “One thing we do is translate our films into Swahili, so that they can become resources for educating [Kenyans] about their environment,” says Stone. “Not everyone knows the story of the wasp and the fig, or understands that the trees are such a rich source of habitat. It’s a keystone species that has a huge impact on the entire ecosystem.”