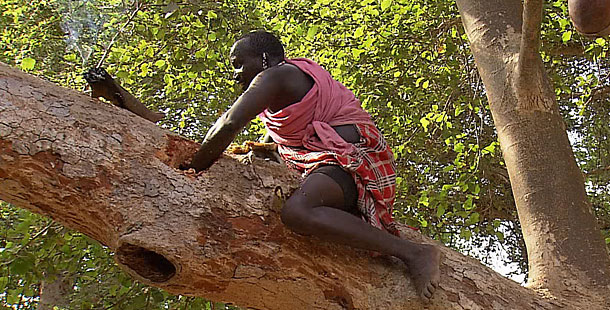 The Queen of Trees reveals Africa’s sycomore fig to be a major player in local ecosystems. A single sycomore can produce tons of fruit each year, providing food for everything from insects and fish to birds and monkeys.

But filmmakers Mark Deeble and Victoria Stone say that land use changes and other problems are threatening the sycomore’s future in Kenya.

“Traditionally, the figs did fairly well [in Kenya], because they have a rather light wood and it’s not a kind of timber most people want to use,” says Deeble. The bigger threat, Stone believes, is agriculture or land clearing for other purposes. “One of the valleys we worked in used to be full of fig trees,” she recalls. “But they’ve all been cut down and people are growing tomatoes now.”

Another problem for figs — and people — is a growing lack of water in some regions due to deforestation and diversion for irrigation. Figs are particularly partial to riverbanks, but “when you cut down the trees, you not only lose the shade, but there is more evaporation, so you lose water too,” explains Stone. “If you are lucky, the river may flow only a few weeks a year.” Just a few miles down the same valley, an entire groundwater fig forest is threatened by the actions of a few farmers upstream.

In some parts of Kenya, it is still traditional to leave fig trees standing even when land is cleared. That’s because the trees are a valuable source of honey from bees that build their hives in holes in the trunks. Honey hunters use small, smoky fires to pacify the bees so that they can take the honey without being stung. But sometimes, Deeble says, the fires are not put out and end up damaging or killing the sycomore fig. “Sometimes the wood can smolder for days, unnoticed, before it bursts into flame. So you see trees with burn scars or limbs burned off. Sometimes the tree dies.”

The filmmakers explain that how figs are treated in Kenya can vary greatly from region to region. One tribe, the Kikuyu, considers the trees to be sacred, and maintains them carefully. Deeble and Stone hope that their film, which will be shown in Kenya, will help make that kind of reverence for the amazing sycomore fig even more widespread.

SHARE
Features
Behind the Scenes with the Filmmakers
Photo Essay: An Extraordinary Ecosystem
Mutual Dependence
Giving Food and Shelter
About
Fig Trees: From the Sacred to the Strangler
Additional Web and Print Resources
You May Also Like
Sex, Lies and Butterflies
Bird Superfood
Deep Jungle: Monsters of the Forest
The Gathering Swarms
Octopus: Making Contact