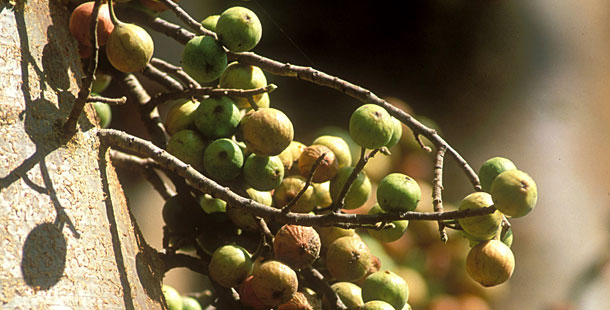 Figs come in all shapes and sizes. Some are trees, while others are bushes or vines. Most are found in the tropics, although a few can grow in temperate climates.

Perhaps the most familiar to most people is the common fig (Ficus carica). Native to Asia and the Middle East but widely replanted elsewhere, it produces those sweet, chewy fruits found in most grocery stores. Archaeologists say that the common fig may have been one of the first plants domesticated by humans. It even makes an appearance in the Bible, when Adam and Eve use fig leaves to cover themselves in the Garden of Eden. Later, sculptors and painters used strategically placed fig leaves to provide privacy to some of their figures, too.

Christianity isn’t the only religion to give figs a prominent role. An Asian species, Ficus religiosa, is considered sacred by Hindus, Jains, and Buddhists. The Buddha is said to have found enlightenment by sitting under the sacred fig, which is also known as the bo or pipal tree. Islam also considers some figs to be holy.

Another notable group of figs are the “strangler figs.” These tropical, vine-like trees start as tiny seeds that have fallen on the branches or roots of an existing tree of another species. The seeds begin to grow, and the young trees encase the host in a tangle of roots and trunks, ultimately strangling it to death. All that’s left are the thriving figs.

Like all other figs, strangler figs rely on a tiny wasp to survive. Worldwide, scientists have described more than 600 different kinds of fig wasps. Usually, each is linked to a specific species of fig, although some figs appear to have more than one pollinating wasp.

These tiny insects pollinate figs by crawling into a tiny hole in the base of a special flower, which ultimately becomes a round or oblong fruit. Female wasps often lay eggs inside the fruit, and the young fight their way out after hatching. They then fly off to find another flowering fig. Timing is everything, since the wasps don’t live long and the trees often flower unpredictably throughout the year. Often, figs that have been transplanted to new areas become sterile because there are no wasps to pollinate them.

Researchers say there are probably several thousand kinds of fig wasps — and perhaps hundreds of new kinds of figs — still to be found and described. But they worry that habitat destruction, particularly in tropical areas, threatens to erase some of these species even before they are discovered.

Behind the Scenes with the Filmmakers
Photo Essay: An Extraordinary Ecosystem
Mutual Dependence
Giving Food and Shelter
About
Kenya’s Fig Trees Under Threat?
Additional Web and Print Resources