BOB ABERNETHY: In other news, controversy has arisen in Loudoun County, Virginia, outside Washington, DC, over the proposed move of a Muslim school funded by the Saudi Arabian government. Paul Miller has the story.

Unidentified Woman #1: Read it together. These are Berossus's hands.

PAUL MILLER: The Islamic Saudi Academy says it teaches children to be good students and good Muslims. They're receiving a civic lesson from residents of Loudoun County. The school has run out of room in its current location in the Washington suburbs near George Washington's Mt. Vernon. It bought a hundred acres in Loudoun County, farther out from the city, and asked for permission to build a $50 million campus for 3,500 students, most of them Americans. In the town of Ashburn, someone dropped off leaflets warning the school could bring thousands of Middle Eastern strangers and terrorists. Some residents of the mostly white, mostly middle-class area were alarmed. 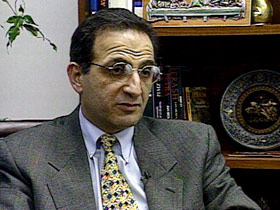 JAMES ZOGBY (Arab American Institute): There's a very deep reservoir of anti-Arab and anti-Muslim sentiment that pops up all too frequently. Remember, after Oklahoma City, Muslims were targeted everywhere in this country and we have done polls on U.S. attitudes towards Muslims. There's a great deal of ignorance, great deal of fear, and that adds up to some bigotry.

MILLER: The crisis with Iraq has added to the nervousness. It appears the county's residents are now evenly divided for and against the school. Overtly racist opponents of the academy were quickly denounced by others living here. Opposition then coalesced around two points: the technical specifics of the school's application and the fact that the academy is owned by the Saudi government. The pastor of the Christian Fellowship Church and School in Ashburn has led the anti-Saudi campaign. James Ahlman says he has no problem with a Muslim school if privately funded, but he must speak out against a government he says... 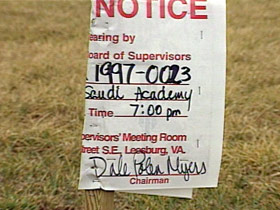 Pastor JAMES AHLMAN (Ashburn Christian Fellowship Church): ...has an atrocious record on human rights, and is known to be one of the worst offending countries when it comes to religious persecution. Saudi Arabia kills, persecutes, imprisons Christians, Jews ...

MILLER: The County Board of Supervisors held a six-hour public hearing on the school's application this week. The school's supporters said the Saudis were just providing a service and it would be unfair to penalize children.

Unidentified Woman #2: I would submit to you that we do not further the purpose of human rights in the world by violating human rights under our own Constitution.

Unidentified Woman #3: We are deeply offended at the injustice of this request. Please vote no. Thank you.

MILLER: What's really behind the objections, some say, is Loudoun County's collision with America's new diversity. Islam will soon be the second largest religion in the country. The county's tolerance is being tested. I'm Paul Miller, Loudoun County, Virginia.

The Islamic Saudi Academy in Loudoun County, Virginia, outside Washington, DC, is creating controversy with its plan for a new campus. Some opponents take issue with the fact that the school is owned by the Saudi government.