BOB ABERNETHY: On February 26, Lithuania inaugurates a new president, American Valdas Adamkus, who fled Lithuania during World War II and returned in 1991 after the fall of communism. One of the key issues facing Adamkus is strong international criticism that Lithuania hasn't done enough to bring Nazi collaborators to justice. Correspondent Jennifer Griffin reports from Vilnius that the presence of these alleged war criminals continues to haunt Lithuania's remaining Jewish community. 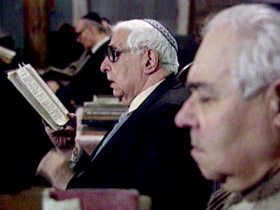 SAMUEL KOTON (Holocaust Survivor): Of course we're offended that they're here; they killed our parents. We go to the forest every year and there they lie, our parents, our relatives, our sisters. We go to the cemetery every year to visit the people the Lithuanians shot.

JENNIFER GRIFFIN, correspondent: Most of the Jewish community of Vilnius was killed during World War II, either by Nazis or by their fellow countrymen. Once, you needed a reservation to get into the synagogue to pray; now the only men who pray there are these Holocaust survivors, members of an aging, dwindling Jewish community, thriving in spirit but not in numbers.

For 40 years, they sat in silence, forbidden by the postwar communist rulers from speaking of the Holocaust. The city still resembles prewar Vilnius -- this was known as the Jerusalem of the North, a rich center for rabbinical training, with one of the most vibrant Jewish populations in Europe. Nearly 240,000 Jews lived in Lithuania, until the Nazis invaded the Baltics and began systematically killing Jews with the help of the local population, eliminating in a matter of months a community which had lived here for centuries. 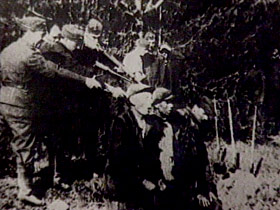 Nearly 70,000 Jews from Vilnius alone were shot in the Paneriai Forest. This is the forest today. It serves as a memorial for the estimated 200,000 Lithuanian Jews who died. This spot was chosen because it was close enough to Vilnius that Jews could be marched here from the city. The victims were forced to dig their own graves here under these trees. When it was clear that the Nazis would lose the war, they forced surviving Jews to dig up the graves and burn the corpses to hide the evidence.

Now, Lithuania's Jewish community numbers less than 5,500, but they are breaking their silence. Many accuse the government of choosing silence again by not doing more to prosecute those who collaborated with Nazis.

BENJAMIN CVIZON (Holocaust Survivor): The government is not doing enough, and for me it is still very painful, because I live here in Lithuania, you understand. There are still people who avoid punishment. Some live abroad, some died, some went to America.

GRIFFIN: Six who went to America were forced to return to Lithuania after U.S. prosecutors brought war crimes charges against them. Aleksandras Lileikis, the former Lithuanian security police chief, was one of them.

Lithuanian prosecutors finally brought charges against Lileikis this month, but the 91-year-old may be too sick to stand trial. Jewish leaders say the government should pursue the others instead of waiting for them to die.

YAKOV MAGGIT (Jewish Singer): We Jewish people think this case -- it should go to court. If the state wants to handle the situation honestly, then the courts should decide. 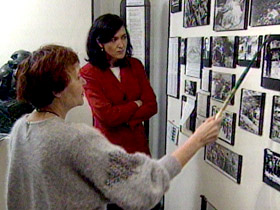 GRIFFIN: Among those unwilling to let the past die is Raqkel Kostanian, curator at the Jewish State Museum. She says her mother never let her speak about the war. Now she and others are overcoming their silence by recalling how they survived.

RAQKEL KOSTANIAN: And I ran because the German airplane -- he was down hunting me, and he was really -- he was very low. And I remember the face of the Nazi, and I don't know why he didn't kill me.

GRIFFIN: For Raqkel Kostanian the events are as clear as if they happened yesterday. Her museum is trying to keep the memories alive for others, memories of children who did not survive.

Those memories are being passed on to a new generation that wants to know what happened to their families. Visiting teachers from Israel teach them Hebrew at this government school, but their grandparents lament that they don't know the Jewish prayers. When these children get older, many will leave Lithuania to seek jobs in Israel or America. They leave behind the older generation entering the twilight of their lives, still haunted by ghosts of the past, wondering when and if the suspected Nazi war criminals living among them will ever be punished.