BOB ABERNETHY: You'll recall that on last week's program, we took an in-depth look at the changing roles of women within Orthodox Judaism. But Judaism isn't the only faith grappling with these issues. We asked Betty Rollin of NBC News to look at the situation facing female pastors in some black churches. Betty, welcome.

BETTY ROLLIN: Thanks, Bob. Women are a mainstay of the black churches. They make up 80 percent of many congregations. But, even though women fill the pews, you'll rarely find them in the pulpits. As in many other denominations, men are reluctant to share pastoral power, but in the case of black churches, the male hierarchy has a surprising ally: other women.

In the constellation of black churches, Vashti McKenzie is a star.

ROLLIN: Reverend McKenzie has been a pastor in the African Methodist Episcopal -- the AME -- Church for 15 years, and there's talk that she may soon be made the AME's first female bishop.

Rev. MCKENZIE: God has given you wings to fly. 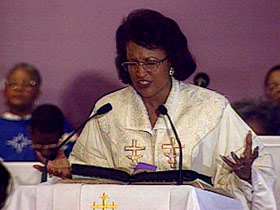 ROLLIN: Black women have always been powerfully drawn to their churches, and now, spurred on by the success of women like Reverend McKenzie, they're entering divinity schools in record numbers. Since 1991, their ranks have increased 59 percent. But Reverend McKenzie's success is not typical. Far more often, black women ministers wind up in subordinate roles, not as pastors. They bump into what they call a "stained-glass ceiling."

And, in the rare instance a woman does get a job as pastor, it's usually in a church like this one in North Carolina. Small, rural, with a congregation of nine.

Reverend ALBERTINE ROUSE: As a seminary-trained person, with an administrative and business background, I felt after graduation and my elder's ordination that my appointment to Union Bethel was unfair.

ROLLIN: Reverend Albertine Rouse, who has a master's degree from Duke Divinity School, left the Union Bethel Church last year. Now she accepts one-shot invitations, when she gets them, to preach at other churches, like this one at St. Joseph AME in Aberdeen, North Carolina. 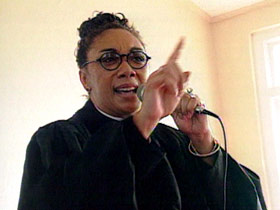 ROLLIN: Reverend Rouse and other black women ministers who have fought their society's racism now feel the sting of their church's sexism.

Rev. ROUSE: Men simply don't want to give up the power. If you plan to be a part of a traditional church, then there is a code of silence. You have to play the game.

ROLLIN: That's what happened to Reverend Helen McLaughlin, a minister for almost 20 years in the Baptist Church, where the leaders, the pastors, are chosen by the congregation. They didn't choose her.

Reverend HELEN MCLAUGHLIN: There were churches where I applied for that hired men who had less credentials, less experience, less time in the ministry than me.

ROLLIN: And when she was invited to preach in someone else's church, some people walked out.

Rev. MCLAUGHLIN: It's real hurtful. The expression on faces, the rolling of the eyes, the whispering while you're trying to preach is an additional stress that I've had to bear. 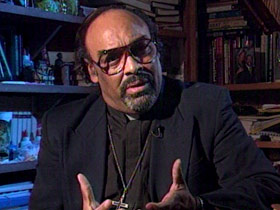 Reverend BOBBY SMITH: The women have become so aggressive with women's liberation. They've become so domineering. They've always been like that, even in the garden. I've never seen and heard any sign or rebellion.

ROLLIN: Reverend Bobby Smith is a pastor in the Baptist Church, which has only a handful of women pastors. A handful too many, says Reverend Smith.

Rev. SMITH: I do not find in the word of God where it substantiated a woman to be in authority over the man.

ROLLIN: It's all in the Bible, says the reverend.

Reverend C. ERIC LINCOLN: Nowhere in the Bible does it say that black women should not be ministers. 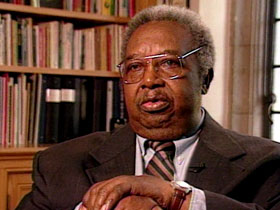 Rev. LINCOLN: The Scripture quoters can find all kinds of reasons in the Bible to deny her aspirations.

ROLLIN: But many of the Scripture quoters are women, who, in most black churches, make up 80 percent of the congregation.

LORRAINE CARTER (Deaconess): I can only go by God's word, and the word is that a woman should not have the authority over a man.

ROLLIN: Do you find that many of your sisters in the church disagree with you?

Ms. CARTER: No, I haven't found any that disagree with me.

BELINDA PORCH (Congregation Member): I don't believe that sisterhood is more important than my belief in God's word.

ROLLIN: Both churchwomen agree with their pastor, Reverend Washington, that although women can and do have some power in the church, they should not be in charge.

Ms. PORCH: I think that is especially important in the African-American community, where we have so many families where there's the absence of a male in the family. 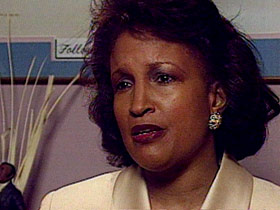 Rev. MCKENZIE: In the final analysis, people really don't care whether you're male or female. What they want to know is, "When I'm sick, will you come to see me? If I'm hurt, will you counsel me? Will you be a role model and counsel my children?" That is what people are looking for.

Rev. LINCOLN: We need all of the effective leadership that we can get, whether male, whether female; it is all in the service of God.

ROLLIN: For most women pastors, "taking it" means settling for less power, leaving the church or, in some cases, starting their own church. Bob.

ABERNETHY: Betty, listening to that wonderful piece, it's clear to me that the women feel a call from God to be pastors, just as much as the men do.

ABERNETHY: So what's the outlook for them?

ROLLIN: Well, again those numbers: There are 27 percent more women in the seminaries today then there were 25 years ago, compared to only five percent more men, and these women are products of their times. They see no reason they can't lead, so the direction is clear. In addition, in Washington, there's a new association that welcomes black women ministers, and this is a change and partly a reaction to Reverend Washington, who you saw in our piece.

ABERNETHY: Betty, many thanks.

Women are a mainstay in black churches, except in the pulpit. Will the “stained-glass ceiling” limit the careers of the record numbers of women entering divinity schools?