Spong was honored at events last weekend in his diocese.

Right Reverend JOHN SHELBY SPONG: Alleluia, Christ, our Passover is sacrificed for us.

ABERNETHY: For decades, Spong has been a combative advocate of liberal causes such as civil rights, women’s ordination, and gay rights. In his many books, Spong has also questioned many of the major doctrines of Christianity, from the virgin birth to the bodily resurrection. His positions have infuriated many church conservatives. 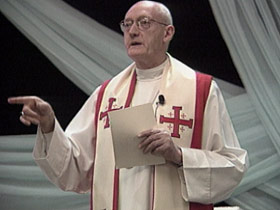 Ms. DIANE KNIPPERS (President, Institute on Religion & Democracy): Jack Spong is telling an upper middle-class secular audience that you can have a religion without cross, without the Bible, without sin, without rules about sexuality. He’s telling them what they want to hear, but it’s not the truth, and it’s not the gospel that will ultimately really set them free.

ABERNETHY: At Spong’s retirement ceremony, where he was among friends, the guest speaker was the head of the Episcopal Church of Scotland.

Reverend RICHARD F. HOLLOWAY (Bishop of Edinburgh): This is not a funeral or a requiem for Jack Spong, and I’m not up here giving a eulogy for him, although lots of people would like those circumstances.

BOB ABERNETHY: Spong’s retirement coincides with the publication of his autobiography, HERE I STAND. We asked Phyllis Tickle, contributing editor in religion for PUBLISHERS WEEKLY magazine, to tell us about Spong’s book.

Ms. PHYLLIS TICKLE (PUBLISHERS WEEKLY): Whether you love him or hate him, Jack Spong has written a very important new book, and it’s a very good book, too. HERE I STAND– it’s his autobiography, and the minute he takes that title for it, HERE I STAND, he tells you a good deal not only about why he’s frequently hated by his detractors, but also about where he sees himself. He sees himself in the tradition of Martin Luther, in the tradition of the Reformation, in the tradition of a theology — Christian theology — that once more has to evolve and has to make some strides forward in order to meet the new millennium. 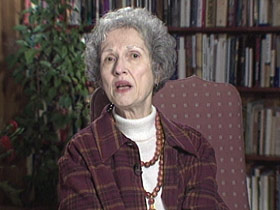 This is an autobiography of a very public man. He talks about all of his activities, from the civil rights movement through the ordination of women and most currently, of course, in gay and lesbian issues, where he’s been very instrumental in pushing the church toward those — towards accepting gays and lesbians.

But it also contains something we’ve not seen in Spong’s work before. There is the story embedded here of his first wife’s descent into madness, and we see the private man briefly. He shows us a glimpse of the hurting husband, of the pastoral husband, and of how he deals with that illness and cares for her right up until the time of her death.

In addition, in HERE I STAND, there is a clear call, and Spong has always had a clear voice in everything he’s written, and he’s always been — the hallmark of his work has been that he takes no prisoners; he calls names and he accuses and he defends his position. And here he takes on his fellow bishops and others in hierarchical Christianity, saying, “The time has now come when what you say among yourselves and what you do must be one and the same. The pew and the nave must hear the same thing that you say in the academy and in the seminary, and those things must agree with what you’re doing. If you’re ordaining gays under “don’t ask, don’t tell,” shame on you. Let’s all come out and say to the people of God in the Christian tradition, “This is what we understand Christian theology to be.” It is a strong call from Bishop Jack Spong, HERE I STAND.