BOB ABERNETHY: For a few short moments this week, a spirit of reconciliation and bipartisanship descended on Washington. It was the 48th Annual National Prayer Breakfast, attended by President Clinton and nearly 4,000 religious leaders, members of Congress, and heads of state. Kim Lawton reports. 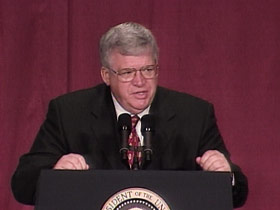 KIM LAWTON: It’s a ritual that has been practiced in the nation’s capital for nearly half a century. For a couple hours a year, government and religious leaders from around the world put politics aside and gather for a morning of prayer.

Representative DENNIS HASTERT (Speaker of the House): Would you please bow your heads and join with me in prayer.

LAWTON: The National Prayer Breakfast began in 1952, when members of Congress invited President Dwight Eisenhower to pray with them. The tradition has grown over the years, and a private group now helps organize it. This year, there were a few departures from tradition. Pope John Paul II sent greetings, which were read to the largely Protestant crowd by a Vatican representative. Franklin Graham gave the closing prayer, substituting for his father Billy, a prayer breakfast founder. Perhaps the biggest surprise: the main speaker was an Orthodox Jew, Connecticut Senator Joe Lieberman, who gave a well-received message.

Senator JOSEPH LIEBERMAN (Democrat, Connecticut): I want to ask all of you here to think with me about how we can strengthen and expand the current spiritual awakening so that it not only inspires us individually and within our separate faith communities but also renews and elevates the moral and cultural life of our country. 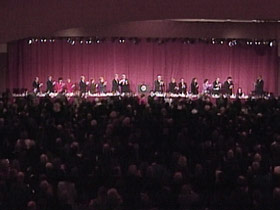 LAWTON: President Clinton attended for the last time as president. He emphasized tolerance and unity.

President BILL CLINTON: Here in Washington, we are not blameless, but we often, too, forget in the heat of political battle, our common humanity. We slip from honest difference, which is healthy, into dishonest demonization.

LAWTON: Unity may have been the theme, but controversy wasn’t far away.

Unidentified Police Officer: Again, if you don’t move out of this public space, out of this driveway at this time, we are going to place you under arrest.

LAWTON: At the U.S. State Department, religious liberty crusader Michael Horowitz staged a one-man act of civil disobedience to send a message to the prayer breakfast. Horowitz said he was concerned about a business-as-usual prayer meeting while believers around the world are suffering religious persecution. 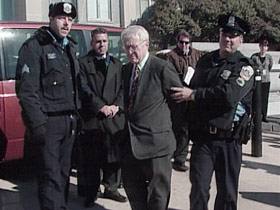 Mr. HOROWITZ: Combined with the prayer has got to be some real firm message coming out of it. Prayer is not some sappy business of people feeling good. Prayer involves responsibility. It involves commitment.

LAWTON: At the breakfast itself, many participants said they did receive a spiritual challenge.

Reverend STAN DeBOE (Catholic Charities USA): It’s been a mixed relationship. He has always called upon clergy to help him out in times of not only national but personal crisis, and yet sometimes the clergy has been some of the strongest critics at times of national and personal crisis.

LAWTON: There’s been a lot of God talk this campaign season among the candidates who want to succeed Bill Clinton. Religious leaders at the National Prayer Breakfast said they hope the next occupant of the White House is a person of faith, but they also said they’ll be watching to see how that faith is translated into action in policy. I’m Kim Lawton in Washington.

BOB ABERNETHY: One of the pastors active in the prayer breakfast movement is the Reverend Charles Wright, whose appointment to be the next House of Representatives chaplain faced renewed controversy this week. In December, House Republican leaders selected Wright, a Presbyterian minister, to replace Chaplain James Ford, who’s retiring after 21 years at the post. But some Democrats allege that a Catholic priest was unfairly passed over for the job. Republicans denied any anti-Catholic bias and spent this week shoring up their relations with the Catholic community. Wright’s appointment will be voted on by the full House later this month.