BOB ABERNETHY: The KANSAS CITY STAR published a series of stories this week on AIDS and the Roman Catholic priesthood. On the basis of a survey it conducted, the paper said the death rate from AIDS among priests is four times that of the general population. But the newspaper’s conclusions have drawn sharp criticism; of the 46,000 American Catholic priests, the STAR sent questionnaires to a sample of 3,000, but only 800 priests responded, all self-selected. Warren Mitofsky, standards chairman of the American Association for Public Opinion Research, reviewed the poll and said any survey with such a low response rate is seriously flawed, and any conclusions drawn from the survey would be suspect.

We also talked about the survey with Reverend Cletus Kiley, executive director for priestly life and ministry of the National Conference of Catholic Bishops. 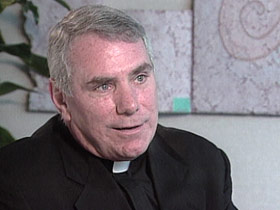 Reverend J. CLETUS KILEY (National Conference of Catholic Bishops): The — my first glance was that the thing was very shocking. I looked at this headline, and there — you know, priests are four times more likely to have AIDS than the general population and so forth. It was shocking, but then I stepped back for a minute, and I — it just does not ring true to me. And I would say that the case be closed. First of all, you’ve got a population group of men, 26 and up, compared to a general population, men, women, and children. It would have been much more valid, I think, had they compared it to other men 26 and older; it would have told us a little more information.

ABERNETHY: And what is the situation?

Rev. KILEY: The situation is nothing new. The situation is something that we are — there are — we do know that there are priests who are HIV-positive. We know that there are priests who have died of AIDS. And I would say that our sense is, across the country, it’s not a large number, probably less than … of 1 percent of the priests in the United States. So that doesn’t mean it’s not — doesn’t come off as a big crisis kind of thing. But the fact is that there are — even if there’s … of 1 percent of our priests with HIV, it’s an issue that we feel we have to deal with; we have to be of comfort to priests.

ABERNETHY: If a priest acknowledges that he is HIV-positive or has AIDS …

ABERNETHY: … does that mean that he can no longer be a priest?

Rev. KILEY: Oh, no. It means he might be sick. He has a disease. He’s definitely a priest, and what it means is he’s a brother who’s sick, and we need to stand with him and help him. Does it mean they’re not a priest? No. It means they’re a human being.

Decline of the Irish Catholic Church