BOB ABERNETHY: Now to the spiritual searching of an insightful woman once honored as one of the greatest preachers in the world, now primarily a writer and teacher. She’s the Reverend Barbara Brown Taylor, and one reason for the change in her occupations is the evolution under way in her ideas about God, the universe, faith, doctrine, and the kind of church she still wants to serve. 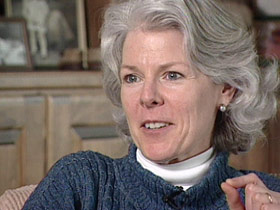 On a cold spring morning near the mountains of north Georgia, down an unfinished road, the Reverend Barbara Brown Taylor, an Episcopal priest, begins to write a sermon. She studies the text and invites God’s inspiration, and then she says she lets it all percolate while she does her chores. Taylor and her husband keep a garden, sell hay, and look after three dogs, also two cats, two horses, and three llamas.

Reverend BARBARA BROWN TAYLOR: When I talk to seminary students and they say, “What do you do for your preaching?” I usually tell them I hang my laundry out on the line. It’s humbling work. I — it’s work in the service of life, in a way. It keeps me in touch with basic realities: sickness and wellness and seasons and temperature and being mindful of whether it’s raining and the horses need to be in and how cold it’ll get tonight. It’s — I get — grounding, very grounding.

ABERNETHY: Taylor’s blend of scholarship, imagery, and everyday experience keeps her booked years ahead as a guest preacher and lecturer. In Enid, Oklahoma, she preached about humanity’s mixed parentage.

Rev. TAYLOR (To Congregation): We’re children of God through our blood kinship with Christ. We’re also sons and daughters of Adam and Eve with a hereditary craving for forbidden fruit salad. 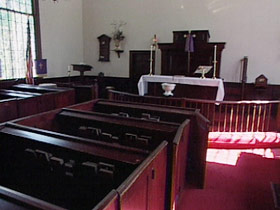 ABERNETHY: Taylor says she’s both terrified of preaching and loves it.

Rev. TAYLOR: I never want to sound too religious, but I also — the experience of the Holy Spirit is the best thing there is, and I feel that when I preach.

ABERNETHY: In 1995, Taylor was still the rector of this small Episcopal church in Clarkesville, Georgia, but then, out of 1,500 nominees, Baylor University named her one of the 12 most effective preachers in the English-speaking world.

Rev. TAYLOR: The Baylor study ruined things for me in the parish. Busloads of people started arriving in a church that seats 82, and regular church members couldn’t get seats. And pretty soon I was involved in celebrity preaching instead of parish ministry.

ABERNETHY: So she resigned. She wanted to stay with her neighbors in the country, not move to a big-city church. She wanted more time to write. Meanwhile, her beliefs were changing. 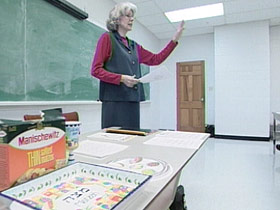 ABERNETHY: Taylor is now a professor at Piedmont College in Demorest, Georgia, where she teaches, among other courses, world religions. This day, a review of some of the facts of Judaism.

Rev. TAYLOR (To Class): True or false? The Holocaust was the first wholesale slaughter of Jews. False. You can hardly, after 1000 C.E., find a century that didn’t have some kind of slaughter or expulsion of the Jews.

ABERNETHY: Most of Taylor’s students are Christians, but she says it’s her job to give them knowledge of all religions, not to insist on the superiority of any one.

Rev. TAYLOR: I am on the edge of Christianity, and I expect to get a letter telling me I’ve been kicked out any day. But my choice, at this point in my life, is to practice the religion of Jesus instead of the religion about Jesus. When I listen to Jesus preach, I hear him telling stories about people outside of Israel whom God loves as much as people in Israel. That’s Jesus religion.

ABERNETHY: Taylor has written or contributed to eight books, many of them collections of her sermons. This year, a new departure for her, THE LUMINOUS WEB, her examination of modern science. Did she find evidence of God? 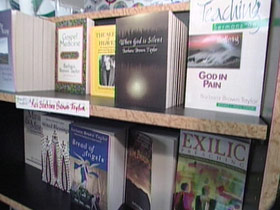 ABERNETHY: As Taylor thought about the universe, she concluded there is one overall reality with different interpretations of it. She also came to see God not as an embodied person, but as the interconnection of everything. She read from THE LUMINOUS WEB.

Rev. TAYLOR (Reading): “Where is God in this picture? God is all over the place. God is up there, down here, inside my skin and out. God is the web, the energy, the space, the light, not captured in them, but revealed in that singular, vast net of relationships that animates everything that is.”

ABERNETHY: Taylor’s first calling was as a writer, not a preacher, and she has found a large reading audience of fellow questioners.

Rev. TAYLOR: I seem to appeal to people who have left the church or who are uneasily in the church, so I hear from a number of people who just want a religious person to bless their doubt, to bless their skepticism, to say, “It’s all right. You’re — what you’re asking is good to ask.”

ABERNETHY: Taylor is on the road at least twice a month, lecturing and leading workshops for preachers. At Barton College in North Carolina, extra tables had to be set up to handle an overflow crowd. Taylor’s theme this day was sin and repentance.

Rev. TAYLOR (To Congregation): The picture will be different for every one of you, but the experience to hunt for when you’re trying to name sin is the experience that makes part of you die — deadly alienation from the source of all life: the experience of being cut off from air, light, sustenance, community, hope, meaning, life. 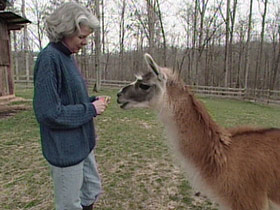 ABERNETHY: Taylor’s message to preachers is “Be honest.”

Rev. TAYLOR: A lot of bad preaching is terrified preachers, preachers terrified to speak from their hearts, terrified they’ll lose their jobs. So a lot of my work with preachers is, as best I can, saying, “I can’t promise you won’t get run out of town, but please, if you want to preach effectively, then speak from your heart, speak from your passion.”

ABERNETHY: After 20 years as a priest, Taylor sees a lot wrong with the institutional church, but she does miss the ministry.

Rev. TAYLOR: I miss leading worship, I miss baptisms and I miss funerals, and I miss hospital calls, and I miss nursing homes. I really miss that a lot. But I think my dream would be to find a group of people who would sign on the dotted line that they intend never to become an institution. I’d go back for that, but I wouldn’t take pay. I hope I would never take pay again to do that, ’cause it felt too much like being paid to love. And you know what that is, when you get paid to love.

ABERNETHY: Meanwhile, along with preaching and teaching and trying to be mindful of God in everything she sees and does, Taylor says she’s working on a sermon about llamas.

Rev. TAYLOR: With these fellows, you have to practice detached love. It’s unconditional love because they don’t give much back, or these particular llamas don’t.

So there — there’s some kind of sermon in there about caring for creatures that don’t necessarily reward you with a lot of affection in return, but continuing to care for them because that’s what I do.