BOB ABERNETHY (anchor): The latest violence in the Middle East highlights the role of religion as fuel for conflict. We want to talk about the religious dimension of the Israeli-Palestinian hostility with professor Marius Deeb, a Christian of Lebanese descent who teaches Middle East history and politics at the Johns Hopkins University School of Advanced International Studies; and with Rabbi Arthur Herzberg, a writer and professor at New York University and Rabbi Emeritus of the conservative temple Emanuel in Englewood, New Jersey. Rabbi Hertzberg joins us from New York. 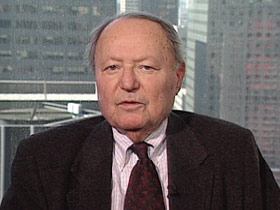 RABBI ARTHUR HERTZBERG: (New York University): It is certainly religious extremism. Religion is the problem to the degree that mainstream religion, which teaches peace, harmony, and the attempt to live together, has not succeeded in curbing the extremists who believe in ethnic hatred and in religion which encourages them to commit all kinds of atrocities in the name of God.

ABERNETHY: Professor Deeb, we’re familiar, I think most of us with, the Israeli claim that the land is theirs because God gave it to their ancestors. What are the Muslim religious claims?

PROFESSOR MARIUS DEEB: Religious claim of course of the Haram Al-Sharif, the Temple Mount, is because Prophet Mohammed’s ascent to heaven was from Jerusalem, and because the mosques were built there precisely because of biblical tradition and anyway, this shows that it is possible to share the Temple Mount, the Haram al-Sharif, between Muslims and Jews because both — the sides are holy to both communities.

ABERNETHY: Rabbi, you’ve argued that religion should somehow be taken out of the discussions of about how to bring about peace. This weekend, that seems like a real longshot. How could that come about? 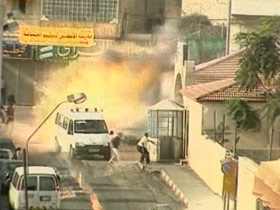 RABBI HERTZBERG: It has to come about. Religions absolutes — religious absolutes and the absolutists who believe in them, cannot compromise with one another. The Temple Mount, the Haram al-Sharif and the conflict over it is an exact example of that. Only pragmatic statesmen who are willing to find formulas for “live and let live” have any hope of bringing peace.

ABERNETHY: Professor Deeb, one of the ideas that has been floated is called “Divine Sovereignty”: that somehow, each side would recognize that God is in charge of the Temple Mount or something. Does that have merit?

PROF. DEEB: I don’t think it is very realistic because in the final analysis, human beings are going to be charged of the Temple Mount and the Haram al-Sharif. So, I think we would have to agree completely with Rabbi Hertzberg, we have to move to the pragmatic politician to solve these problems.

ABERNETHY: Rabbi, some Christians say, “well, the answer is to have some kind of international control of the Holy sites”; that’s not going to fly though, is it? 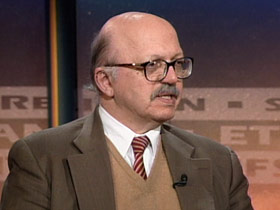 RABBI HERTZBERG: Well, the last time this was discussed seriously, it didn’t fly at all because immediately, various national and for that matter church interests got involved in who was going to chair the international control, who would call the tombs. The only way the tombs can be called so they can be lived with, is for Palestinians and Israelis, Jews and Arabs to realize, that they are if you will, destined if you will, condemned, to live with one another, to live together.

ABERNETHY: Now, you say that the statesman should pick up on this and find compromise, but I gather you also feel that there are big responsibilities here for the religious communities on both sides to try to rein in their extremists, right?

RABBI HERTZBERG: Absolutely. The great task of religion — and it is a historic task almost since time immemorial — is to teach each of us to teach our people that the true meaning of the faith is it’s universalist element reaching out towards all of mankind and therefore the true meaning of religion is to bring Shalom, to bring peace, which is of course a component of the very name of Jerusalem.

ABERNETHY: Professor Deeb is that a possibility on the Muslim side, do you think?

PROF. DEEB: Yes, I think it is a possibility, but of course we need pragmatic politicians to push men of religion in that direction because men of religion, in their own — in Muslim tradition — did not have independence which exists in other religions.

ABERNETHY: Professor Deeb, Rabbi Hertzberg in New York, many thanks to both of you.