BOB ABERNETHY: This week in COMMONWEAL Magazine, an independent Catholic journal, writer and scholar Peter Steinfels, a Catholic, takes a thoughtful look at the crisis in the Church and calls for changes to overcome it. Peter Steinfels writes the “Belief” column for THE NEW YORK TIMES. He joins us now from New York. Peter, welcome.

You don’t excuse any of the abuses, but you do point out that almost all of them happened 15 or 20 years ago or more. Why is that significant? 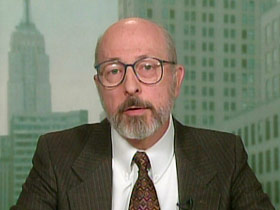 PETER STEINFELS (THE NEW YORK TIMES columnist): I think it’s significant because it shows that the actions the bishops took in, say, the years 1992, ’93, both to prevent further sex abuse cases and to root out from their own diocese people who were likely to be repeat offenders, had some effect. But I think that that raises the further question: If they did take that kind of effective action, why has today’s crisis, today’s scandal, accelerated to a level and a dimension even greater than any of the concerns that were widely made public during that earlier period?

ABERNETHY: And what’s your answer to that?

STEINFELS: Well, my answer is twofold: the one has to do with the concern about how much of that was done behind closed doors. The fact is that the bishops, even when they took those actions, very few of them gave full and complete explanations of what had been going on to their people in their diocese.

But the second is, not only has the scandal eroded trust, but there was a previous erosion of trust — a kind of tinder ready to be ignited — that had occurred because of a lot of other questions, and has made Catholics all the more distrustful in the current situation.

ABERNETHY: So quickly, what has to be done?

STEINFELS: I think that there has to be a full-scale clearing of the air. Some setting up of a kind of commission like the Kerner Commission or the others that reviewed national crisis in the ’60s in the United States, with bishops, with other credible Catholic figures, maybe even some non-Catholics on it, to give a full explanation of what happened in the earlier years, what has been disclosed since the beginning of this year, and what proposals could be put in the works to prevent this kind of thing in the future.

ABERNETHY: Peter Steinfels in New York, many thanks.