BOB ABERNETHY, anchor: As American Catholics have reeled from the disclosures of past sexual abuses by priests, and evidence they were covered up, one of the questions raised has concerned priestly celibacy — abstinence from sex. Was that requirement a cause of the abuses? Is it necessary for dedicated ministry? Should it be made optional? Lucky Severson talked about celibacy with priests… and former priests. 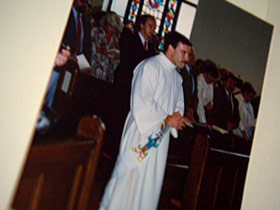 LUCKY SEVERSON: Tim Higgins is a chaplain at a correctional institution for juveniles in Portland, Maine. Eight years ago he was a Catholic priest — Father Tim Higgins — until, after a lot of prayer, he reached the conclusion that he could no longer live a celibate life.

Pastor TIM HIGGINS (Former Priest): I love priesthood, love ministry, love the work of the priest. That’s why I am doing a variety of ministerial things now. That calling burns in my heart. But the desire to come home to a partner was just as big as time went on.

SEVERSON: So he is no longer a priest, but he is a father of a little boy and girl, doing what many fathers do, picking his kids up from day care. He is also a symbol of what some Catholics think contributed to the growing pedophilia scandal — the policy of celibacy. This is Father Richard McBrien, a theologian at the University of Notre Dame. 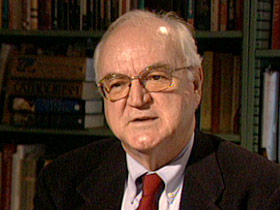 Father RICHARD MCBRIEN (University of Notre Dame): Celibacy doesn’t cause pedophilia, but the fact that we have obligatory celibacy in the Roman Catholic Church means that the priesthood is an attraction to a certain type of candidate who otherwise might not be attracted, or as much attracted, to the priesthood.

SEVERSON: According to a recent poll by NEWSWEEK Newsweek, 69 percent of Catholics favor allowing priests to be married. But for many Catholics, like Father John McLoskey, director of the Catholic Information Center, the tradition of celibacy should never be changed.

Father JOHN MCLOSKEY (Catholic Information Center): The Catholic Church will not and cannot change its traditional teachings and disciplines simply because of a particular moment and a particular time in a particular country. That is not how the Church has had a 2,000-year history, by going according to opinion polls.

SEVERSON: Father Jim Stack is a priest at the St. Jermone Catholic Church in Hyattsville, Maryland. He says times are difficult, which is perhaps an understatement, but the scandal has not altered his view of celibacy. 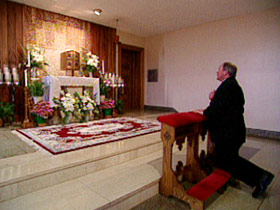 Father JAMES STACK (St. Jermone Catholic Church): I love celibacy. I enjoy it. It’s a gift from God, where your love can be given to all. And that is consequently one of the neatest things about my life. I like loving people that the world blows off and thinks that they are not important.

SEVERSON: He became a priest 15 years ago, but not before anguishing over whether he could stay true to the vow of celibacy.

Father STACK: Boy, I really thought about it hard, too. I had, you know, times where I dated and really had to really say, “Can I do this?” And ultimately it wasn’t me being able to do it. It was Christ who said to me, “You can do it because I am with you. And I will always be with you.”

Pastor HIGGINS: I truly believe that it is a gift for some and for others like myself, it was a discipline and I finally confronted it. I said, “This is not a healthy life style for me. I need to do something.”

Father STACK: Shouldn’t they have made that choice before they got involved in this thing? I mean, you make a promise. You make a commitment. 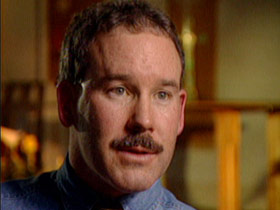 SEVERSON: In his new life, Pastor Tim Higgins counsels a young couple about their upcoming wedding, [at] which he will officiate. He says his bishop questioned his sanity when he said he was leaving the Church, but that he was not going to lead what he calls a double life.

SEVERSON: It was not, he says, about sex. 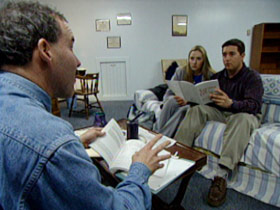 SEVERSON (to Pastor Higgins): So it is overrated?

Pastor HIGGINS: Far overrated. Absolutely. It is about the need for a partner and the intimacy of a relationship.

SEVERSON: Although Church rituals have changed little over the centuries, some traditions have. Celibacy, for instance, has been practiced continuously only since the 12th century, and then it was instituted more for practical than spiritual reasons.

Father MCBRIEN: The pragmatic or practical reason emerged more in the beginning of the second millennium, when there were abuses and married priests who were leaving Church property to their families, and married bishops were appointing their sons to lucrative Church offices — income-producing benefices, they would call them. So it was to break the back of that kind of corruption. 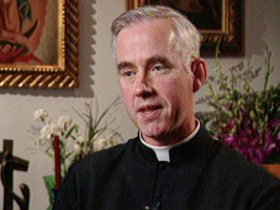 SEVERSON: Even Father John McLoskey, who believes the concept of celibacy dates back to the time of the apostles, agrees that there were times in the Church when it was not universally practiced.

Father MCLOSKEY: There were popes who had illegitimate sons. And there might have been popes who had sons before they became priests.

Father MCBRIEN: The Catholic Church has a married clergy. We have thousands of priests who are in the Eastern Rite churches. We also have former Episcopal priests who came over to the Roman Catholic Church out of a sense of disappointment, to put it mildly, that their church was now ordaining women.

SEVERSON: Most everyone agrees that the Church will weather the current scandal as it has others. Georgetown University Professor of Theology Chester Gillis. 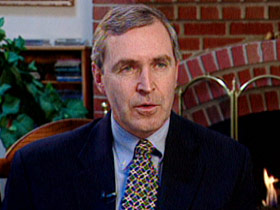 Father MCCLOSKEY: I see the future of celibacy as quite positive. I think this crisis, it is a watershed at the moment for the Church in the United States. I think from here on there is a clear opportunity for people who are looking at the Catholic Church to see it in all its beauty and all its authenticity, and also for those people who are nominally Catholics to decide whether they really want to live the Catholic faith fully as the Catholic faith is proposed to them, or go elsewhere.

SEVERSON: Tim Higgins is just one of thousands of Catholic priests who have left the Church to get married — one factor creating a severe shortage. In fact, the number of priests leaving the priesthood has actually been accelerating. In 1980, there were almost 59,000 priests in the U.S. Last year, the number had dropped to 46,000. And fewer are applying for the ministry. 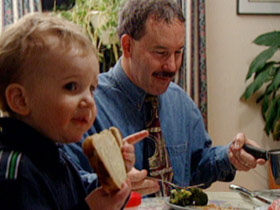 SEVERSON: Tim Higgins believes that allowing priests to marry will make them more in tune with the needs of their parishioners.

Pastor HIGGINS: As a married person, I know what the people in the pew are living on a daily basis. Because I have a mortgage, I have two kids and another on the way. I am up in the middle of the night with a sick child. That’s what people in the parish are doing. “Father So and So” in the parish doesn’t have that experience.

SEVERSON: But from Father Stack’s point of view, the responsibility of marriage can actually be a distraction from his ministry.

Father STACK: My celibate commitment tells people, “You know what, everybody? The most important thing in this world is God.” And for someone to give themselves totally to God, that says something.

SEVERSON: Father Stack says he would remain celibate even if the Church made celibacy an option. Tim Higgins loves the calling so much he is now attending an Episcopalian church with the hopes of becoming one of its priests.