BOB ABERNETHY, anchor: As war seems to draw nearer and diplomats and religious leaders debate how or even whether it can be avoided, we have a Belief and Practice segment today on a new Trappist monk.

The life of Brother Amos, as he is now known, may look about as far away from war as you can get. But we are assured … the monks at Mepkin Abbey in South Carolina are praying every day for what one of them called “a peaceful resolution to this madness.” 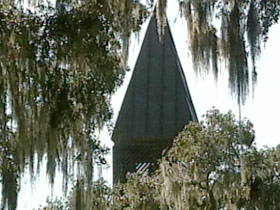 John Kiely, Brother Amos, is a novice at Mepkin Abbey. He is 39 years old and has made a commitment to spend the rest of his life at the monastery. That means he will rarely leave, have only one visit a year from his family, and forego other freedoms.

Brother AMOS: It’s when God calls you. You can definitely see by the men and women that come into our order and others that it is a calling from God.

He was a shipwright — specializing in restoring 17th- and 18th-century sailing vessels.

Now, after more than a year at Mepkin, Brother Amos spends his days meditating, praying, worshiping, and working on the abbey grounds. 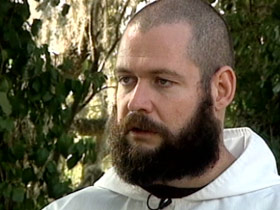 At Mepkin, monks follow the 1,500-year-old Rule of Saint Benedict — a life of contemplation, solitude, silence, and obedience.

Brother AMOS: You’re getting rid of your own will. You’re obeying the will of a superior — and that’s very countercultural.

ABERNETHY: His life is organized around the Divine hours — praying seven times a day, beginning at three in the morning.

Brother AMOS: I’ve always done the Divine Office for years and years, even before I came here. You’re really breathing, you know, the scriptures. And so your whole life is revolved around it.

ABERNETHY: Every task is considered an act of worship — in monastic habits or work clothes: daily food preparation, washing dishes, restoring a run-down workshop, making repairs, moving furniture. And each monk is expected to do every task.

Like monks before him, Brother Amos will be buried someday on a nearby hill overlooking the Cooper River.

Father Aelred Hagen, who has lived at Mepkin since 1977, oversees the training and education of novices. 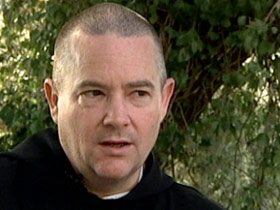 Father AELRED HAGEN: It’s a life of transformation. It’s about a person becoming more like Christ. And no one ever said Christian life is easy. A person has to be able to have the ability to go deeper. And without this inner thirst, this kind of inner dynamism, they run out of steam.

Brother AMOS: And it is a sacrifice. We’re here to get closer to God. It’s also in many respects a penitential life.

Father HAGEN: St. Benedict looks for in the novice, he looks for obedience, love for the Divine Office and the ability to accept the difficult things of life. And, when a person can do that, there’s a kind of peace that is expressed in their own individual way. They’ve become the life. The only way you can fall in love with God is to keep him in your heart.

Brother AMOS: Family? Well, that’s very important to me. But you have to kind of look at that’s one of the sacrifices in life you have to make. When you take a religious life, that is a sacrifice. You’re giving up that part of your life to live as Jesus did. And when you start making God in your life as the number one thing, that’s when you start seeing the richness of the Church. But it’s taken me a lifetime to learn that.

ABERNETHY: Brother Amos is one of 10 postulants who have gone to Mepkin Abbey since 1998. Half of those have stayed. Thirty-one brothers call Mepkin home. Abbot Francis Kline says indications are that the interest is growing. Other monasteries across the country report increased inquiries.