On orthodoxy:
Rowan Williams is entirely orthodox, theologically speaking, and he belongs to a generation of Anglican theologians who have reverted to a certain kind of critical, creative orthodoxy in reaction to an earlier generation of predominately liberal theologians. 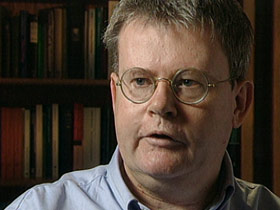 On issues of sexuality and evangelical opposition:
It is very important to point out, first of all, that the Anglican church has already said that for the laity, faithful homosexual relationships are all right and indeed are to be celebrated. So there’s an inconsistency; these are not considered all right for the clergy. And Rowan Williams, quite correctly in my view, has always held that clergy are human beings, too, and if we’re saying this is humanly all right, then it must also be okay for the clergy.

The number of evangelicals who are opposing him at this point is not so very great, and even some conservative evangelicals who have a lot of hesitations over this issue are nonetheless giving Rowan Williams tremendously strong support. The most sophisticated, the most interesting evangelicals are supporting him because they realize that this isn’t the only issue around.

Rowan has made it abundantly clear that he has to abide by the view of the whole global Anglican church. He’s not going to actively campaign [about homosexuality], I don’t think. Of course, he’s not going to change his mind. But he’s very aware that he’s now in a different position, and that in the whole Anglican church throughout the world, if you include the Third World particularly, there’s a lot more hesitation over this issue. Nor do I think that Rowan wants to get caught up on this issue alone; it could stymie the whole of his primacy if he did that. He’s stated very clearly that it’s a matter for the whole of the church, and he’ll abide by that decision. He realizes that he’s in a different position now from when he was Archbishop of Wales-there are many more people in the Anglican church as a whole who are worried about this issue. But he’s not going to change his mind.

On politics:
He’s a saint, and he’s a politician, and the two things don’t contradict each other in my view. He’s not a politician in the sense that he thinks of this as quite apart from his religion. He belongs to a tradition that sees the church itself as the anticipation of the heavenly kingdom, that sees the church itself as a social project, as the place where true human flourishing could come into being. There’s a political dimension to his theology, but it is integrated with the whole of his Christian vision.

In every sense, he can be considered a Christian Socialist. It’s clear that he is in that tradition, and he’s identified himself as an “old Labor” supporter in contrast both to new Labor and perhaps in contrast to what [U.S. Secretary of Defense Donald] Rumsfeld now calls the “new Europe” as well. But he’s by no means a statist socialist. He belongs much more to a tradition that stresses cooperative organization-people on a small scale organizing things for common benefit and not putting profit first and foremost.

On preemptive war with Iraq:
It’s clear that he has very grave misgivings about the justice of such a war. Rowan is uneasy about the war in Iraq or probably opposed to it. He doesn’t think that such a war would fulfill the criteria for a just war as traditionally articulated by Christian theology. He thinks that it wouldn’t be a proportionate conflict, that the risks involved in this conflict don’t justify the end being sought. I also think he’s very dubious about the real motivations behind this war.

Rowan is not a pacifist. He’s not opposed to all war on principle, and indeed I think it’s very unlikely that an Archbishop of Canterbury could be a pacifist. But it’s also clear that he thinks the criteria for a just war are extremely rigorous and extremely hard to meet, and it’s likely that most wars in the modern world are not going to meet those criteria.

On political activism and the tradition of his predecessors:
He is incomparably more active. He reaches back to a long tradition of high church archbishops who are very, very concerned with social and political issues. There’s a strong traditional feeling in that branch of the Anglican church that the Incarnation has social relevance, that the kingdom of God must to some extent be incarnated in the social order. Rowan adds to that a much stronger feeling for the catastrophe and unavoidable tragedy of human life. He balances it out in that way. But he has real social and political vision, and he’s made it quite clear that he will speak out on a whole range of political issues. He’s going to speak out against the total commercialization of every aspect of life. He’s going to resist both the spread of the market into every corner of life and the spread of the nation state or what is referred to as the market state, a kind of international conglomeration of states into every aspect of life. He’s already said that we need to speak out in favor of the role of intermediate institutions-institutions belonging neither to the market nor the state and which mediate between very local life and the politics of the center and the power of corporations. He thinks that churches can play a great enabling role in supporting such intermediate kinds of society.

At the moment, we have businesses that exist to generate profit on the one hand, and we have all the apparatus of central government and central law and policing on the other hand, and we need far more forums in which people can come together and talk about the social and collective good-quality of life and the purposes of life for individuals and communities that aren’t simply to do with profit or security or the power of the state. I think he thinks that churches already are those kind of societies, those kind of communities. They’re concerned with the common welfare and therefore they can be the brokers, as he puts it, for the creation of those kind of debates and for the formation of intermediate organizations that can make participatory democracy far more real.

On church decline:
It’s an absolutely massive problem, and in many ways that’s the primary reality that he’s going to face. It’s clear that Rowan is completely uninterested in the idea of a well-managed decline, which I think the Anglican establishment so far has entertained much too much. To the contrary, Rowan thinks that we either go down fighting or we return. He’s already indicated that one of the primary tasks is to recapture people’s imagination for Christianity. And allied to that for Rowan is the idea of seeing the importance of the imagination itself-that in many ways, if you unleash the imagination, you grasp much wider dimensions to truth, and you’re open to the kind of truths that religions are talking about. The whole area of the arts and the question of liturgy and the question of resacrilizing time and space are going to be important for RowanÉThere’s a sort of uniformity to liturgical practice now; the same thing happens all the time. But this is not a matter at all of simply going back to old forms of words or necessarily always old gestures. The Anglican tradition has put a lot of stress upon the beauty of worship. But there is a kind of drab uniformity that has entered into new liturgies-rather flat language, a loss of the sense of liturgical movement, that physical movement is part of the liturgy, that liturgy is not simply a drama, it’s not simply a spectacle that you watch; it’s something you really perform and in making that performance, you are somehow linking eternity and time. I think Rowan will encourage very much forms of liturgy that return to a more imaginative use of language and a more creative use of movement and gesture and introduce more variety for special occasions, the special festivals of the church’s year.

I think that Rowan will think that the church has a responsibility to maintain a presence in every part of the country. The Church of England still has a parish system; in other words, it’s not congregational in its assumptions. The assumption is that it is making provision for all the people of the United Kingdom. Therefore, maintaining a presence everywhere remains the church’s responsibility, even if it’s economically difficult.

On global injustice and other issues to be faced:
There are a huge number of Anglicans in Africa, so I’m sure that Rowan is going to think that he has a great responsibility for that continent. I certainly think that he’s going to be very concerned with issues of global injustice. It’s very difficult to say what he is going to do specifically, but I’m sure that he’s going to fight very hard against what he sees as a weighting of all the rules in favor of the wealthy West.

I’ve already mentioned imagination-the idea of the imagination as a road to truth and to a true envisaging of Christianity, which is a very powerful Anglican tradition that Rowan continues. A second thing also concerns the matter of truth. I think that Rowan is going to insist on the rigorous intellectual credibility of Christianity, and he has another battle on his hands there. For many people in Britain today, all religion is seen as just ridiculous, particularly amongst the chattering classes, and it’s assumed that Christianity has very weak intellectual credentials. To some extent, the church has almost gone along with that by playing safe and talking about “doing good” and “pastoral care” and more affective issues. Rowan, to the contrary, will insist that Christianity is a truly possible, rigorous vision that people can hold.