BOB ABERNETHY, anchor: As the crisis over Iraq intensified, the Vatican this week ratcheted up its diplomatic efforts to avert war. Pope John Paul II scheduled several high-level meetings, including one this weekend with British Prime Minister Tony Blair.

On Tuesday, United Nations Secretary General Kofi Annan visited the Vatican to discuss the Iraq situation with the pope and other Church officials. John Paul was also briefed by his special envoy Cardinal Roger Etchegaray, who was in Baghdad last week. The cardinal carried back a special message to the pope from Saddam Hussein. This new round of meetings followed John Paul’s talks last week with Iraq’s Deputy Prime Minister Tariq Aziz. 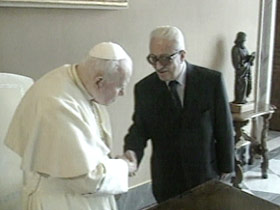 Why is John Paul so opposed to using force, if necessary, to disarm Iraq?

JOHN ALLEN JR. (Vatican Correspondent, NATIONAL CATHOLIC REPORTER): Fundamentally because he does not think this would be a just war. Both because the relationship between the good to be achieved and the harm that would be done just is not there, and also because the imminence of the threat posed by Iraq is not at present convincing.

The Vatican is concerned about several things here. One is the fate of Christian minorities in the Islamic world. Another is the broader Christian-Islamic relationship in all the places around the world, the conflict zones if you will, where there is tension there. The third is that the strength of international law, international institutions, above all the United Nations, and I think that their calculus is that on all three of those issues this war would have a disastrous impact.

ABERNETHY: Spell that out a little more, if you would — the disastrous impact. You mean humanitarian impact? 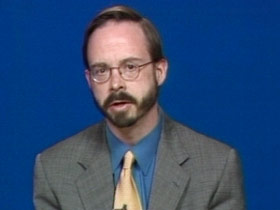 Mr. ALLEN: Yeah, I mean one of the key principles of Catholic just war theory is that the good to be obtained from use of force has to be proportionate to the harm that is going to be done. I think the concern here is the harm — the humanitarian harm — could be enormous. You are talking about loss of life, potentially in the thousands. There is a Reuters estimate in recent days that the financial cost of even a short war could be as much as a trillion dollars. I think their sense is that those resources could be put to better use.

I think that one measure of the impact of that kind of criticism is that the language being used by the leaders of the western coalition, people such as Prime Minister Tony Blair of England and Silvio Berlusconi of Italy, has in recent days shifted from essentially a security argument, that is that what is important here is disarming Saddam Hussein because he poses a security risk to the West, to a moral argument that what is important here is the suffering of the Iraqi people and the systematic denial of their human rights under the Hussein regime. I think that that decision to use a moral language, a kind of moral rhetoric, is in a way a backhanded tribute to the effectiveness of the pope’s moral criticism.

ABERNETHY: John, is there anything under consideration there of something that the pope might do to prevent war?

Mr. ALLEN: Well, I think you are going to see in the coming days a continuation of this full-court diplomatic press. In recent days, we have seen Jessica Fisher and Kofi Annan and Tarek Aziz in the Vatican. We have seen the pope dispatch a special emissary to Baghdad, French Cardinal Roger Etchegaray, and that sort of activity will continue. Certainly Vatican diplomats — through formal channels and informal channels — will continue to be pressing their argument that this war must be avoided.

There is also talk in Rome that the pope might dispatch a special emissary to George Bush in Washington to try and make a similar argument as was made with Saddam Hussein. I think it is clear that the pope and the Vatican diplomatic core is committed to doing everything that they possibly can to see that this war does not happen.

ABERNETHY: Many thanks to John Allen of the NATIONAL CATHOLIC REPORTER.