BOB ABERNETHY: Here at home, for the first time, the National Trust for Historic Preservation has included religious buildings on its list of the country’s most endangered historic places.

Also this week, the federal government reversed a longstanding policy and said churches that are historic landmarks can get government money for historic preservation. The move provoked sharp church-state debate. 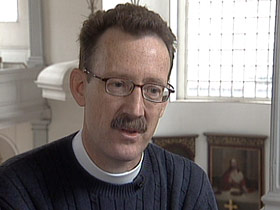 The case in point was Boston’s Old North Church, where in 1775 the sexton signaled Paul Revere how the British were coming by hanging two lanterns in the belfry.

Old North is an Episcopal church, with about 150 members. It is also a historic landmark, with more costs to repair its 43 clear windows and stay open for sightseers than its congregation and visitors donate. So it asked for, and this week got, a $317,000 Federal grant.

Rev. STEPHEN T. AYRES (Vicar, Old North Church): The balance between the religious activity here and the historic activity is pretty much this: there are about 7,000 people over the course of the year who worship here, and about 600,000 who come to learn about American history here.

ABERNETHY: The Administration’s decision to give Old North a preservation grant provoked an immediate argument.

Rev. BARRY LYNN (Americans United for Separation of Church and State): The Bush Administration seems completely dedicated to its faith-based initiative, which involves not only the funding of religious programs but now, apparently, the reconstruction of religious buildings in need of some kind of repair. This is part and parcel of an overall effort to fund religion at taxpayer expense. 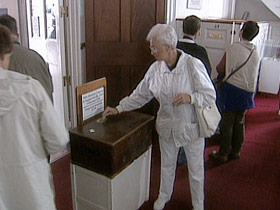 NATHAN DIAMENT (Union of Orthodox Jewish Congregations): What it’s really about is treating religion neutrally and fairly. Not to say that all historic buildings are going to be preserved except for the religious ones, and those have to fend for themselves.

DIAMENT: …religious buildings are just as appropriately supported or just as important to historic preservation as secular ones. And to not put them in the same category in this particular policy is to discriminate against religion.

ABERNETHY: Back in Boston, Old North has a foundation for preservation work, and it is expected to match the government’s grant.

With Old North as a precedent, other historic churches are now expected to seek government grants for their preservation, too.

The 16th Street Baptist Church in Birmingham, Alabama, where a bomb killed four little girls during the civil rights movement.

And the Catholic Basilica of the Assumption in Baltimore, Maryland, the oldest cathedral in the country.