Read more of Kim Lawton’s interview with theology professor Timothy Matovina, director of the Cushwa Center for the Study of American Catholicism at the University of Notre Dame:

Hispanics, of course, are more numerous than ever before in the country, but beyond that, some key large states — California, Texas, New York, Illinois, Florida — have large numbers of electoral votes, so the Latino vote has become increasingly important with each passing election. And the trend of Latino importance for federal, national, state elections will only continue to grow as time passes in this country. 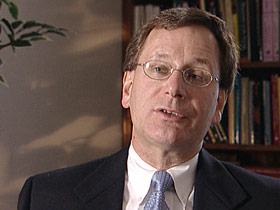 Latinos have traditionally been far more Democratic than Republican, although there are some changes that have been afoot for quite some time now. There are regional and ethnic differences. Cubans tend to vote more Republican than Democratic, largely because one of their major issues is what’s going on in their homeland and how U.S. policy affects things in Cuba. Others in Texas have been wooed by George Bush’s gubernatorial campaigns — not in large numbers, but there are those who support his stances on morality issues. That brings them more in line with what the Republican Party holds, and of course many Latinos are very concerned about the immigration issue and will tend to judge the candidate based on their perception of how that candidate will react with regard to immigration.

Like any other group, with upward mobility some Latinos start to vote more with the Republican Party and to align themselves more with its policies and perceptions. Latinos I think are falsely sometimes seen as only a newly arrived group of poor immigrants. This is simply not the case. Some have been here for many generations; a growing number are going to college; a growing number are rising to the middle class and above. This is not the vast majority, but a number that’s larger than is commonly thought, and with this upward mobility, there is more and more voting in the Republican Party.

The Hispanic vote is not a single unified bloc. It tends to still be very strongly in the Democratic Party, but because of Cubans who vote along their national interests on the island, because of upward mobility, because of some residents with Republican stands on moral issues, there are a number of reasons why Republicans are gaining a somewhat more important percentage of the Latino vote.

It’s become almost necessary now for any national candidate to have some part of their stump speech that they can give in the Spanish language and a certain speech or appeal they can make to Hispanic voters. We’re well past the day when candidates are no longer noticing the Latino vote. They’re very much on the radar screen of anyone who has aspirations for national office.

Another important element of faith-based community organizations is voter registration. They’ve registered literally millions of voters. They’ve encouraged people, sometimes immigrants who have not yet become citizens or who were citizens who were not yet registered, to become active in the political process. They teach them that this is an important part of being an American, and it’s important for their future and the future of their children. The encouragement of civic participation is another great way of promoting and fostering the vote that faith-based community organizations have engaged in.

The Catholic Bishops’ pastoral letter or statement, “Faithful Citizenship,” is widely known by pastors and team leaders, and I think in preaching, in the teachings and the classes offered by community organizers, this statement is being filtered down to grassroots voters on a number of levels, including among Latinos, and I think it will very much be one more encouragement for them to get involved and participate in the political process.

Latinos, particularly immigrants who come to this country, often find they’re in a world that’s very unfamiliar to them. The Church therefore has a tremendous degree of credibility. They look to the Church for advice on how to live in a new and different environment. So when the Church encourages civic participation by voter registration, by becoming concerned and knowledgeable about the issues, by voting responsibly, this carries tremendous weight with Hispanics — to get them to see that this is part of what it means to be a citizen and a resident of the United States of America.

The issues that are most important to Latinos are diverse, of course. Cubans will tend to be more concerned with national policies toward Cuba. Many recently arrived and second-generation Latinos are much more concerned about immigration and immigration reform, the laws of immigration and how immigrants are treated. Others are concerned with poverty issues. Education is a big issue across a lot of fronts for Latinos. And, of course, moral issues also come into play in certain quarters as well, and many people find them to be the most important issues that will determine their vote.

Although it’s difficult to make broad generalizations, Latinos tend to be more supportive of programs that help the poor, that help the working class, that might be more progressive in terms of social reform. On the other hand, they tend to be much more family-oriented in terms of sexual and moral issues, more conservative on the issues of abortion and gay marriage. In my experience of Latinos, they tend to be far more concerned in their voting patterns with the issues that affect their families, day-to-day living in their own family lives such as education, immigration, welfare, job training, concern for youth, and so on. Those tend to be the more important issues on which they base their vote.

I think Latinos can be influenced by anyone who approaches them with their own language, with their own cultural style, who shows an interest in valuing them as persons whose thoughts, whose views, whose vote matters. Many candidates and many interest groups have picked up on this, of course, and I think any group who tries to make a legitimate appeal — that appeals to the head, that appeals to the heart, that appeals to what’s at the core of Hispanic cultures and values — such a group would have an opportunity to have an impact on Hispanic voters.

Latinos, like all Catholics, are influenced not so much by what’s going on in the national press. But they are certainly influenced by what their pastors say to them on Sunday morning. To the extent that the current disagreements and arguments are influencing pastors and the way they preach, the way people at the local level receive teaching on how their faith and their conscience should be formed as Catholics in terms of their voting, I think Latino Catholics are as apt as anyone else to be influenced by individual pastors and what they’re teaching in the local churches.

The Hispanic Churches in American Public Life study, which is about to be published, did extensive work on the 2000 presidential election. Surprisingly, it showed that contrary to what many sociologists believed, Latino Protestants even in the evangelical Pentecostal churches still retained quite a strong allegiance to the Democratic Party, even though their denominations tend not to. This is one of the most surprising findings of this national study. How this will turn out in the current election is going to be very fascinating to watch. But the presumption that a Latino who becomes Pentecostal or evangelical will vote in accordance with the way the Christian Right has tended to vote has been shown to be not entirely true, although it does tend to lean them toward the Republican voting choice. Many Latinos still live in inner cities even when they become Pentecostals, and indeed, Pentecostals and evangelicals have a great urban ministry. I think the tendency to vote with the Democratic Party still remains strong because they are looking for political leaders who will address those core urban poverty and struggling, working-class family issues that are so much a part of their own lives.

Latin America has a long history of church and state being much more closely aligned than we’re used to in the United States. In general, a Latino immigrant who comes here comes with a certain wariness of a politician who seems too closely aligned with a church body. On the other hand, Latinos want to know that their leaders are people of faith, that they are people of values. I suspect for both presidential candidates, an appeal to Latino voters, if they’re listening to their advisors who know Latino culture, might tend to focus even more than usual on their faith, their values. While Latinos don’t want to see too close of an alliance between church and state, they do want to know the person they’re voting for is a person they can trust. And to them a person they can trust means a person who has a deeply based faith in God, which guides their life.

One of the most important, if not the most important organization to register Latino voters in the Southwest is the Southwest Voter Registration and Education Project, which is now about 30 years old. It was founded by Willie Velasquez, and it has registered at last count more than 2 million Latino voters and taught them civic participation in the Southwest. These kinds of organizations, while independent, sometimes work through churches, sometimes through civic groups, but they always work not for one party or the other but to get people registered, and to get Latino people to vote and to participate. These kinds of ongoing grassroots efforts across the Southwest and now across the nation are an important element in the rising number of Latino voters and Latino influence in presidential and other elections in the United States.