DEBORAH POTTER, correspondent: Worship begins at 2 on Sunday afternoons at this Assembly of God church in suburban Washington, DC.

Hours later, it's still going, the sanctuary packed with congregants praying in rapid-fire Spanish. Membership at Iglesia Cuadrangular el Calvario has doubled in less than two years. The pastor says most of those who come are immigrants from Central America, and former Catholics.

ELIUD RUIZ (Pastor, Iglesia Cuadragular el Calvario): A lot of people, they call themselves Catholic on this case, but mostly because of tradition. But they don't really know anything about it.

POTTER: What these worshipers do know is that they've found a home in this evangelical Protestant church.

RUIZ: They like to be feeling free, freedom to worship the Lord with our heart. The way the Lord likes it is when we do it with all our heart.

POTTER: Most Hispanics in the United States still call themselves Catholic. They make up an increasing proportion of the church. Over the past 15 years, the number of Catholic churches offering mass in Spanish has tripled to more than a quarter of all parishes. 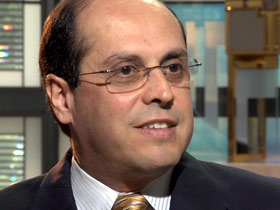 ALEJANDRO AGUILERA-TITUS (U.S. Conference of Catholic Bishops): The response never seems to be enough for the numbers because every time a parish opens the door and welcomes immigrants, it's filled up. The influx of immigrant Catholics has kept the Catholic Church membership around 70 million so that’s definitely a trend.

POTTER: Almost half of Catholics under 40 are Latinos, according to the Pew Research Center. But the church's hold on second and third generation Hispanics is not as strong. Just 40% of Latinos whose grandparents were not born here say they are Catholic, while 30% now call themselves Protestant.

WILFREDO DE JESUS: I hear people come to our church and say, "What time is mass?" Or they call me "father." So I know they come from the Catholic...and they just say, “You know, it’s just so different. I love it here. I feel like you’re talking to me. I don’t feel like it’s just so rigid.”

POTTER: Wilfredo de Jesus became pastor of New Life Covenant church in Chicago a dozen years ago. Born in Chicago to a Puerto Rican mother, de Jesus—like many in his congregation—is not fluent in Spanish. 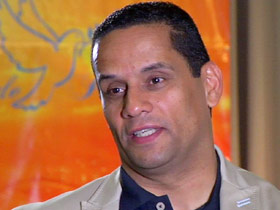 POTTER: Under de Jesus, the church added services in English and experienced explosive growth. New Life is now the biggest Assembly of God church in the country, drawing more than 17,000 worshipers a week at multiple campuses. Many grew up Catholic but found in Evangelical churches something they longed for.

VANESSA VILLA: Every time I come to a service I always get something new. I always have something to work toward. I feel like the love of everybody, we’re like a family and I feel just loved and appreciated.

POTTER: New Life calls itself a church for the hurting, providing shelter for these women, as well as food, clothing and support to many people in need, and jobs at a café run by the church.

Marelyn Garcia came here after 13 years of drug and alcohol abuse and now runs a New Life ministry for women. 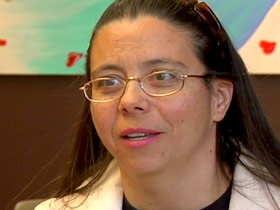 (to Marelyn Garcia): What would have happened to you, do you think, had you not found this place?

MARELYN GARCIA: I would have been dead. I would definitely have been dead. Towards the end of my addiction I was too much of a wimp to commit suicide, but I was drinking my life away, I was having unprotected sex with multiple men, I was working the streets as a prostitute, which I did for five years.

POTTER: New Life’s success is visible throughout this Chicago neighborhood, where the crime rate has dropped as the church has grown. Pastor de Jesus believes any church can have a similar impact in its community, so he’s sharing his playbook.

Three hundred pastors and church leaders from across the country attended New Life's third annual conference to learn how to jump start their ministries from the man people call Pastor Choco.

DE JESUS: (speaking at conference) God is saying, I’ve got the money. I’ve got the resources. What I need is a church that’s willing to meet the needs of these people. Is that you? Is that you? 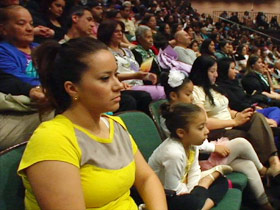 POTTER: What have you learned so far?

MURPHY: What I've learned is that if pastor Choco can do it, we can do it.

POTTER: The pastors also learned firsthand how New Life ministers to the homeless.

Isaac speaking to man: Hello? God bless you sir. How are you?

POTTER: Some believe the election of the first Latin American Pope could help the Catholic church retain more Hispanics.

DE JESUS: (preaching) I’m not asking you to join my church. You can join any church you want. But you need to learn how to wait on the Lord. If you raised your hand would you do me a favor? Get out of your seat and come quickly. Come, come.

POTTER: And they do come, forming a new community, united in prayer. More of them every week.

Most Hispanics in the U.S. still call themselves Catholic, but more and more are joining Protestant churches, especially the younger generation. The explosive growth of the Protestant Hispanic population can be seen in places like New Life Covenant Church in Chicago, which draws more than 17,000 worshipers every week.