SAUL GONZALEZ, correspondent: With Pike’s Peak as a backdrop, the citizens of Colorado Springs aren’t shy about telling visitors about what makes their community so special. There’s the U.S. Olympic training center and the United States Air Force Academy, historic neighborhoods with fine old homes, and lots of ways to enjoy a healthy, outdoor lifestyle. However, among many American Christians, Colorado Springs is also known for something else—as an epicenter of evangelical faith and activism. That’s partly because of the high-profile megachurches in the community, but mostly because of the sheer number of national evangelical Christian groups headquartered here. In fact, there are so many Christian groups in this community, Colorado Springs has earned something of a reputation and a nickname: America’s Christian Mecca.

Pastor in church: We are so glad that you came to be a part of the presence of God that is in this house today. Amen? 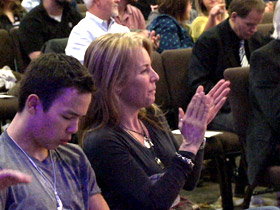 GONZALEZ: For some people of faith in Colorado Springs, like Kimberly Lieu, the Christian presence is so strong, they stay they felt a spiritual calling to move here. Kimberly came here from Hawaii.

KIMBERLY LIEU: We just came here sight unseen. I know now it was the Lord leading us.

GONZALEZ: The Lord brought you here?

LIEU: I believe that absolutely. I wasn’t pursuing him at the time, he was pursuing me.

GONZALEZ: But what brought the big Christian groups to Colorado Springs? Well, a major factor was an economic development program started by the city’s government more than two decades ago.

GLENN PAAUW (Director, Biblica): The economic development council at the time, this is in the late 1980s, they were looking to attract Christian ministries.

GONZALEZ: Glenn Paauw is the director of Biblica, one of America’s largest Bible publishers. It was lured to Colorado Springs from New York State in the 1980s. The city gave Biblica incentives in return for the jobs the organization brought to the community. 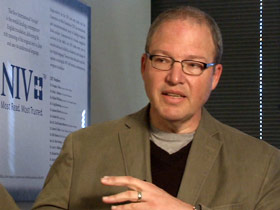 PAAUW: They came to us and said there is already a center here in Colorado Springs of other Christian ministries, so your networking possibilities, your ability to find staff who want to work in a Christian organization and contribute to your global ministry, that’s going to be easier for you to do.

GONZALEZ: However, the biggest and most powerful Christian organization that came to Colorado Springs—in this case from California—also became the most controversial group in town. It’s the conservative public policy organization Focus on the Family, which has long been a political lightning rod because of its conservative stance on hot-button social issues, such as abortion and gay rights. Jim Daly is Focus on the Family’s president and CEO. He doesn’t apologize for his organization’s conservative positions, but he acknowledges the fear and anger they often stir. 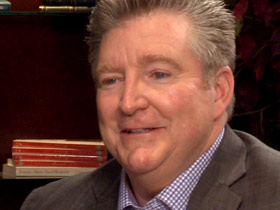 JIM DALY (President, Focus on the Family): Well, you know, the caricature is a problem, and I think…

GONZALEZ: What’s the caricature of Focus on the Family?

DALY: Yeah. I think that caricature can be hard right, ultra right. It’s because those are labels that are used to describe the organization. I don’t care too much about what grade culture gives us. The question is are we on the right side of what the Scripture would require of Christians to live out.

GONZALEZ: That right side is on display at Focus on the Family’s Colorado Springs campus, which includes a multimillion-dollar visitor center. In it, messages about the importance of faith and conservative family values take center stage. However, even as Christian evangelicals continue to organize in this beautiful corner of Colorado to fulfill their vision of America, some within these groups are starting to reassess their activism. They wonder just how deeply they should be involved in American politics and whether they should start building bridges to people who don’t agree with them.

Pastor at church: You have been welcomed into the family of God.

(to Daly): Do you consider yourself a culture warrior?

DALY: No. I really don’t. I don’t think the label is a healthy one. And I think oftentimes in the Christian conservative community, we are not expressing love of our fellow man. 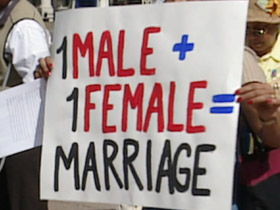 DALY: We can come across very harsh, too harsh. And I think these are lessons that we’ve already seen written about in the New Testament, when the religious leaders of the day, when Jesus was on the scene, and they had a very condescending views of sinners, people that didn’t measure up. We’ve got to be very careful now not to repeat that same mistake, because from where I sit there are two billboards that come out of the New Testament: salvation through Jesus Christ, and don’t become a Pharisee, a religious bigot.

Focus on the Family video: I can still remember where I was the first time I saw picture of fetal development.

GONZALEZ: Now, Focus on the Family is still squarely against gay marriage and legalized abortion, positions expressed in videos like this one produced by the group. However, Daly says the stern messages and moralizing of many conservative Christians over divisive social issues have turned off too many Americans, especially young people. He also believes Christians have become too involved in bare-knuckle politics, sometimes focusing more on winning elections than cultivating their faith. 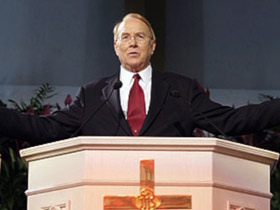 DALY: If Christian leadership has become so much about winning and victory, it turns us into the predator and the world our prey.

GONZALEZ: Focus on the Family has been frequently criticized for its own political activism, particularly under its founder and former leader Dr. James Dobson, who left the group in 2010. While he was in charge, Dobson frequently attacked liberals, feminists, and gay activists. He also endorsed conservative political candidates, like George W. Bush and several members of Congress, while criticizing Barack Obama as a political and social radical.

Sean Hannity Show: And we continue now with Dr. James Dobson. He’s the founder of Focus on the Family. Dr. Dobson…

GONZALEZ: For instance, here’s Dobson in 2009 on Fox News’ Sean Hannity Show. He talked about what he believed was President Obama’s misunderstanding of America’s religious culture.

JAMES DOBSON: It does bother me, and it also bothers me that he doesn’t seem to understand those Judeo-Christian values and roots. 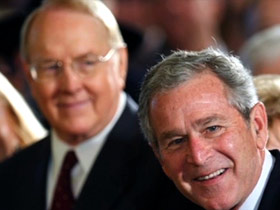 GONZALEZ: Although Jim Daly doesn’t criticize James Dobson directly, he does say political activism by Christian evangelical leaders has often been a mistake.

DALY: I think for Christians we should have calculated that a little differently, not to be wrapped around the axle of politics. Because the issues we are dealing with, although they are in the arena of politics, when we get to abortion and marriage and other things, I think we let the rhetoric capture our hearts, so we came across as more partisan than I think we should have.

GONZALEZ: How much has Daly changed? Just listen to how he talks about America’s growing acceptance of gay marriage. He doesn’t like it, but he accepts its reality in many states.

DALY: I think in this area of gay marriage, or recognizing gay union, the culture is going to make that decision. Here’s the bottom line, if it happens, will I shriek and run around in circles? No.

GONZALEZ: The leader of Focus on the Family says it’s also important for evangelical Christians to reach out and start talking to groups they’ve usually battled with in the public arena. That ranges from gay rights organizations to the pro-choice group Planned Parenthood.

DALY: If we are just going to build a fortress, hunker down, and try to ride it out, that is not a very good strategy, so I feel certainly one of the clarion calls for the Christian is to engage the culture, to reach out. 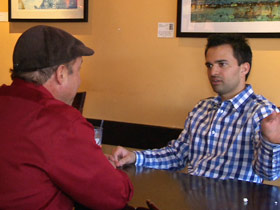 GONZALEZ: In Colorado Springs, we saw a small example of that reaching out by Focus on the Family.

John Weiss at table: No, you are intolerant, but you are not hateful.

GONZALEZ: Every couple of weeks Focus on the Family’s Rajeev Shaw, who does community outreach for his organization, sits down to discuss city issues with John Weiss. He’s the publisher of the town’s alternative press weekly and one of Colorado Springs’s best known liberals. Weiss says he’s seen a big change in Focus on the Family’s willingness to engage with one-time enemies in the community.

JOHN WEISS (Colorado Springs Independent): Under the prior leadership, we were distant. We did not communicate except through verbal barbs and ad campaigns. There was the gay pride parade in town and there were messages, “God Hates Fags” and stuff like that. There’s a new kinder, more listening, view at Focus. 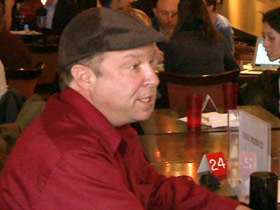 GONZALEZ: Really, you really see the change in tone?

WEISS: It’s a total change in tone, not in ideology, but for us to come together and chat and have dialogue, and say where can we work together?

GONZALEZ: Shaw admits, though, that these conversations have been, well, a process.

GONZALEZ: In the case of Weiss and Shaw, those issues include finding ways to help foster children in the community. Focus on the Family’s Jim Daly acknowledges that these kinds of overtures to ideological and religious adversaries haven’t endeared him to some on his side of the cultural divide.

DALY: That’s one thing that is occasionally mentioned from people on my side of the debate, that I’ve raised that white flag of surrender simply because I’m saying I can’t control what the world does. And I think that is one of the problems today, that we’ve become so partisan that we don’t spend time with one another, and I think it’s a great weakness.

GONZALEZ: So a question is will Colorado Springs, the community that’s sometimes synonymous with conservative Christianity, also become the place where people with conflicting views can set aside their differences and find a little bit of common ground?